Ms. Tan, 24, said the atmosphere at the bar, the Great Escape, was more down-to-earth than what she normally encountered in Singapore’s slick downtown clubs. And that was the point.

“It would be kind of boring if everything was the same,” she said through a thicket of pink and green strobe lights at the bar, which sits in an upper-level parking lot. “That’s why this place is so valuable to people like us.”

Landmarks of so-called Brutalist architecture, like Golden Mile Tower, are emerging havens for the sort of gritty, artsy subcultures that are mostly absent in Singapore, a banking center known for its tidy streets and often-overbearing governance. 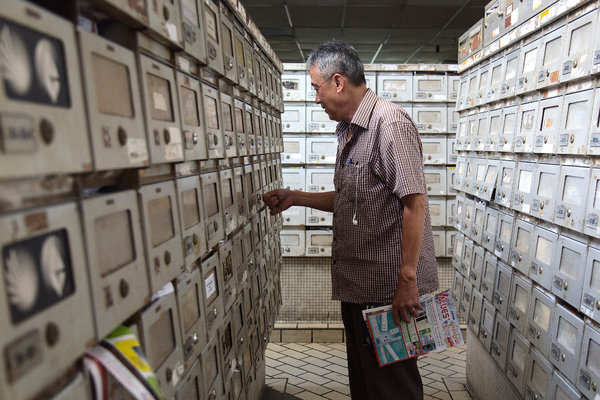 Others see them as important markers of national identity because they were designed by a generation of up-and-coming local architects just after the city-state’s founding in 1965, when the city’s growth was fueled by large-scale urban renewal projects.

But a few prominent Brutalist landmarks are on the verge of being sold to private developers, which has prompted a last-ditch scramble by enthusiasts to have the buildings protected by conservation laws. It has also set off a thorny debate about what type of architecture is worth saving in the first place.

Brutalist buildings represent Singapore’s early “hopes and aspirations,” said Darren Soh, an architectural photographer. He said destroying them would add to a sense among many residents of this former British colony that buildings of all kinds are being demolished and replaced too quickly.

“At some point in time, all this glitz is going to become old,” Mr. Soh said at Golden Mile Tower, referring to the glass towers of the nearby financial district. “What are we going to do then?”

Brutalism, once a pejorative term, typically refers to modernist buildings of stark simplicity and raw edges, whose primary feature is unfinished concrete. The style was most commonly used in the design of government buildings and public housing.

Singapore’s 1970s-era Brutalist movement was influenced partly by a similar one in postwar Britain, said Ho Weng Hin, a partner at Studio Lapis, a local architectural consultancy. He said many of the Singaporean architects who pioneered the style had trained in Britain or Australia.

Singapore’s own take on the Brutalist style, Mr. Ho said, evolved to reflect local sensibilities and a tropical climate, so he said a better term for it would be “Singapore modernist.”

Brutalism fell out of favor worldwide around the 1980s, but that has recently been changing in the West — for example, in London, where Brutalist behemoths like the Barbican Center are winning new fans. A group of designers and architects in Boston has even proposed renaming the style “heroic” architecture.

Advocates of the style in Singapore hope that the same trend will take hold here as well. But they face a number of obstacles.

Singapore’s downtown skyline is dominated by glass and steel towers, much like any other global financial hub. The highlights include the triple-towered Marina Bay Sands hotel, by the Israeli-born architect Moshe Safdie, and a nearby art-and-science museum that he designed in the shape of a lotus flower.

The city-state is also known for its meticulously restored shophouses and other examples of British Colonial architecture, as well as contemporary green buildings that were designed to look stunning but also save energy in a tropical climate.

The city’s Brutalist buildings, in contrast, are widely considered eyesores by the general public.

These buildings often have a shared ownership of common facilities. And because many owners think that selling their units collectively is a better financial bet than investing in a conservation or retrofitting plan, the buildings have largely fallen into disrepair because no one wants to pay for short-term upkeep.

A prominent example is Golden Mile Complex, a dramatically terraced Brutalist building that is down the street from Golden Mile Tower and that went on the market in November for a minimum price of 800 million Singapore dollars, about $587 million.

Eileen Chua, whose family has lived in the Golden Mile Complex for three generations and owns a cramped convenience store on its ground floor, said the 16-story building had grown “sleazy” over the years as maintenance tapered off.

“I love heritage buildings,” Ms. Chua, 40, said on a recent evening outside the family store, which is in a florescent-lit corridor alongside massage parlors and money-changing kiosks. “But this building is disgusting.”

While the buildings’ designs and current conditions may not inspire much affection among ordinary Singaporeans, advocates are calling on the government to earmark some for conservation status, just as it did in the 1980s for the shophouses.

They say that while Brutalist buildings may not be as conventionally pretty as shophouses — two- or three-story buildings, with a shop on the ground floor and residences above — they are better expressions of Singaporean identity because they embody a true vernacular architecture.

Any “self-respecting” global city would see value in the buildings, not least because they offer inexpensive rents for the creative class, said Karen Tan, a former investment banker who runs the Projector, an art-house cinema in Golden Mile Tower, which houses offices, shops and restaurants. She described the space as a welcome counterpoint to Singapore’s polished veneer.

Tan Huey Jiun, the director for conservation planning at Singapore’s Urban Redevelopment Authority, said in an email that the agency has conserved more than 7,000 buildings, including several state-owned modern ones.

But conserving a large modern building with multiple private owners is challenging, she added, in part because owners may disagree on how to maintain it — or whether it is worth conserving.

“Where there are merits to conserve such buildings, we will work with the owners to facilitate the process,” she said.

But the agency’s critics note that under Singapore’s Land Titles Act, 100 percent of owners in such buildings must approve a conservation plan, whereas 80 percent approval is required to put a building older than 10 years up for a collective sale. They say that makes the bar for conservation almost impossibly high.

“The economic logic works against it,” said Eunice M.F. Seng, an architectural historian at the University of Hong Kong who has studied Singapore’s modern architecture.

The fate of Golden Mile Complex, which is on the market until Jan. 30, is seen as a bellwether of how the city’s Brutalist landmarks will ultimately fare.

The Dutch architect Rem Koolhaas once praised it as a “unique work” animated by “bold intentions,” and the Urban Redevelopment Authority recently told the local news media that it had received a proposal to preserve the building, rather than to demolish it, and add a new one beside it.

“The fact that people find it ugly means that it already has authenticity,” said Jonathan Poh, an architect who has an office on an upper floor.

But a Singaporean politician once called Golden Mile Complex a “vertical slum,” and the recent decision to sell won support from more than 80 percent of the building’s owners.

That includes Ms. Chua, who said her family had purchased its ground-floor store 40 years ago at a “dirt cheap” price. She said she now expected it to fetch at least two million Singapore dollars, or nearly $1.5 million, and that the sale could not come quickly enough.

She said the building’s unusual design elements, including its sloped concrete terraces, were not enough of a factor to change her mind.

“This is all about the dollars and cents” of the property market, she said. “It’s not worth even renovating these tiles if they’re chipped.”