There is no shortage of merchandise in China devoted to the former president of the United States, Donald J. Trump. There are commemorative coins, toilet brushes and cat toys; countless figurines, including updated versions of Mount Rushmore, plus all those flags, bumper stickers and hats from campaigns past and future. (Does anyone still believe all that “Make America Great Again” stuff was really made in America?).

A furniture maker and decorator in southern China has cast a sculpture of Mr. Trump in ceramic whiteware, his legs crossed and hands serenely resting in his lap. He is draped in a monk’s robes, his head is lowered and his eyes are closed, as if in meditative repose, an emotional state not typically associated with the 45th president of the United States.

The artist calls it “Trump, the Buddha of Knowing of the Western Paradise.”

“He has been already very successful, but now he is still tormenting himself, being obsessed, having a lot of ideas and doubts,” the creator, Hong Jinshi, said when asked about his inspiration.

Mr. Hong’s sculpture reflects an abiding cultural fascination with Mr. Trump in China that began with his election. Many admired his brash style, his family’s business ties to China and even his early courtship of China’s leader, Xi Jinping, whom he called “an incredible guy.”

Admiration for Mr. Trump in China arguably peaked during his visit to Beijing in 2017. Since then, his image has soured along with relations with the United States. The fraying of those ties were exacerbated by a bitter trade war, the coronavirus pandemic and a re-election campaign in which Mr. Trump used China as a cudgel to attack the ultimate winner, President Biden.

Mr. Hong, 43, lives and works in an old cement factory turned workshop and gallery, in the coastal city of Xiamen. He conceived the work last year, but only recently completed the first few sculptures. He put those up for sale on the online vendor Taobao, offering two sizes, one at just taller than 6 inches and another at 18 inches. He is asking the equivalent of $153 and $615.

In the description, he wryly added, “Make your company great again.” And judging from comments online, some potential customers were buying into the pitch, as if adoration of the statue could bring good fortune. 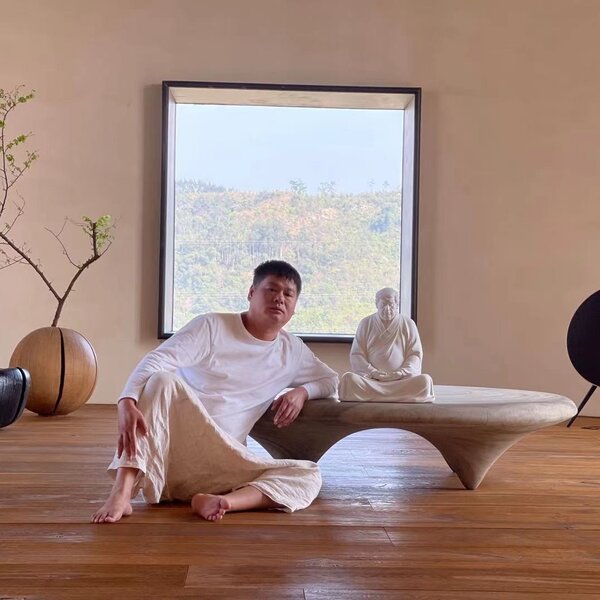 “It may have something to do with my personality,” Mr. Hong said. “I love teasing people and making jokes.”

Mr. Trump “is still having fights with all kinds of this and that every day,” he said of the former president’s penchant for brawling with opponents. “So I think this image is exactly the opposite extreme of him and his personality.”

Mr. Hong’s Taobao listing went viral online, drawing the attention of The Global Times, a state newspaper, and others this week.

He has so far sold about 100 sculptures, but this being China, where intellectual property rights are loosely enforced at best, knockoffs have already been produced, selling on Taobao for a fraction of the cost of his originals. He has complained to Taobao, but the pirates have simply changed photos and updated their listings to keep ahead.

His is not the first Trump sculpture in the news lately. Another, also reportedly made in China, appeared last month at the Conservative Political Action Conference in Florida, along with Mr. Trump himself.

It remains to be seen whether Mr. Trump’s legacy as artistic muse will be as enduring as, say, Mao Zedong’s. It may depend on Mr. Trump’s political future. Trump 2024 merchandise is already available online.

Mr. Hong considers the Trump Buddha a work in progress. He said the wrinkles on Mr. Trump’s lips are too deep, creating an effect incongruous with his vision. He said he has given no thought of creating a sculpture of Mr. Biden, though he is fascinated by another prominent American entrepreneur, Elon Musk.

He has set aside the first of 100 numbered pieces of the larger works for a particular patron. If possible, he said, he would like to give one to Mr. Trump.

“He has been very, very successful, so from a religious point of view, he should just let go at this time,” he said. “He should enjoy his life at this age.”