The powerful typhoon has begun to lash southern Japan with officials warning it could bring record rainfall. 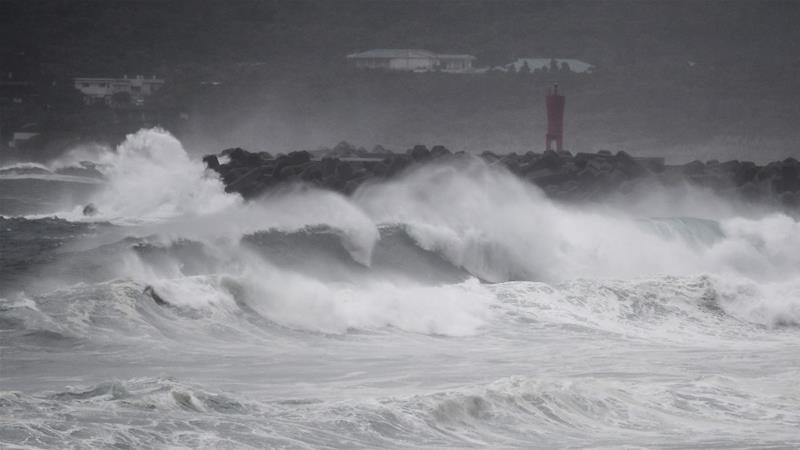 Authorities urged early evacuation for more than 100,000 households in the southern prefectures of Okinawa, Kagoshima, Kumamoto, and Nagasaki, according to the Fire and Disaster Management Agency (FDMA).

Prime Minister Shinzo Abe on Sunday met the relevant cabinet ministers to discuss the emergency response to the typhoon, his office said.

“I ask the Japanese people, including those who live in high-risk areas for flooding rivers or high tides to stay informed and take action immediately to ensure their safety.”

Elderly citizens wearing face masks due to the coronavirus outbreak were slowly gathering at evacuation centres in Kagoshima and other parts of southern Japan, footage on national broadcaster NHK showed.

The typhoon has cut power to more than 3,000 homes in Okinawa, the southernmost island prefecture, and more than 8,000 homes in Amamioshima, according to NHK.

Lashing it down here on Amami Oshima as #typhoon #Haishen closes in pic.twitter.com/2vytxmJagB

Two injuries have been reported, according to the FDMA, but authorities were advising the highest levels of caution for a typhoon.

The typhoon is forecast to have an atmospheric pressure of 935 hectopascals at its centre, and sustained winds of up to 234 kilometres per hour (145 miles per hour) by Monday, the meteorological agency said.

Haishen, currently equivalent to a strong Category 2 storm, is located about 400km (260 miles) south of Sasebo on the island of Kyushu, moving northwest at 30km/h (20mph).

The storm is expected to pass to the west of Kyushu any time between 12:00-18:00 GMT on Sunday, and is likely to lose some intensity as it hits southwest Japan.

Haishen is expected to be further downgraded by the time it makes landfall with 150km/h (90mph) wind, equivalent to a Category 1 hurricane. It is then forecast to hit the Korean Peninsula early on Monday morning.

“I live near a river, and I wanted to go to a safe place and thought about the coronavirus too,” a woman in Miyazaki told NHK after bringing her family to a local hotel.

Typhoon Haishen follows Typhoon Maysak, which smashed into the Korean Peninsula on Thursday, leaving at least two dead and thousands temporarily without power.

The man who filmed it said he went out to move his car but gave up because the rain and swirling winds made him feel like he was in a dishwasher. pic.twitter.com/CVV0ChCnyl