SEOUL, South Korea — A senior American negotiator arrived in North Korea on Wednesday to sort out crucial details for a nuclear summit meeting in Vietnam between President Trump and the North’s leader, Kim Jong-un, with only three weeks to go before the talks take place.

Stephen Biegun, the Trump administration’s special representative for North Korea, arrived in Pyongyang, the North’s capital, around the time that Mr. Trump announced in his State of the Union address that he and Mr. Kim would meet for a second time on Feb. 27-28 in Vietnam. Mr. Beigun’s trip had been announced in advance.

When Mr. Kim and Mr. Trump first met in Singapore in June, they agreed to work toward the “complete denuclearization of the Korean Peninsula” and to build “new” relations between their countries. But since then, talks have stalled over how to carry out that vaguely worded agreement.

Mr. Trump now wants “significant and verifiable progress on denuclearization, actions that are bold and real,” Mr. Biegun said last week in a speech at Stanford University. But American intelligence agencies recently cautioned that the North was “unlikely to completely give up its nuclear weapons and production capability.”

During his Pyongyang visit, Mr. Biegun plans to pursue “concrete plans to advance all of the elements of the Singapore joint statement,” he said last week. He said the working-level talks in Pyongyang would be aimed at finding concessions that each side could accept, as well as “a road map of negotiations and declarations going forward, and a shared understanding of the desired outcomes of our joint efforts.”

Mr. Biegun’s trip to negotiate such important unresolved issues, just weeks before the talks, reflects the top-down diplomacy that Mr. Trump and Mr. Kim appear to prefer. The American envoy had his first meeting with Kim Hyok-chol, his newly appointed North Korean counterpart, only three weeks ago in Washington.

Unlike their predecessors, Mr. Trump and Kim Jong-un — after a series of vitriolic exchanges during the American president’s first year in office — have personally driven their countries’ diplomatic engagement, exchanging letters and flattering remarks. Mr. Trump has boasted of his “fantastic chemistry” with Mr. Kim, even saying that the two “fell in love.” 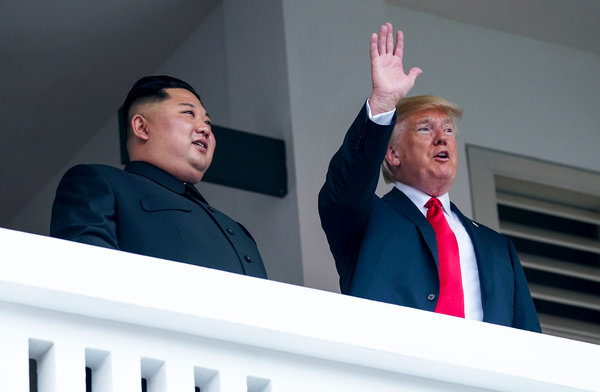 President Moon Jae-in of South Korea has said that Mr. Trump’s apparent strong desire to become the American leader who ends the North Korean nuclear threat, along with Mr. Kim’s announcement that reviving the North’s economy is his top priority, have increased the chances for a breakthrough in the decades-old nuclear dispute.

“We hope that both leaders will take more detailed and concrete steps in Vietnam,” Mr. Moon’s spokesman, Kim Eui-kyeom, said on Wednesday, urging both sides to learn from the American experience in Vietnam.

“Vietnam and the United States once wielded guns and bayonets against each other, but they are now friends,” the spokesman said. “We hope that Vietnam will provide a perfect backdrop as both sides try to write a new history.”

In Vietnam, a one-party Communist state where government offices were closed on Wednesday for the Lunar New Year holiday, Mr. Trump’s announcement was noted in the state-controlled news media. Le Thi Thu Hang, a spokeswoman for the Vietnamese Foreign Ministry, said in a statement that the country “strongly supports dialogues held with a view to maintaining peace, security and stability in the Korean Peninsula.”

Others in Vietnam said the meeting would be a good opportunity for Vietnam to raise its international profile, advance some of its strategic interests and improve its relationship with the United States.

Mr. Biegun said last week that Mr. Trump’s bold approach had allowed more room for maneuver than any of the envoy’s predecessors had. His North Korean counterpart is from the State Affairs Commission, a powerful agency that reports directly to Kim Jong-un.

“It’s a positive sign that the working-level teams of both sides are headed by figures who are considered flexible and deeply trusted by their leaders,” said Cheong Seong-chang, an analyst at the Sejong Institute in South Korea.

But critics said that going into a meeting with Mr. Kim without a clear set of agreements hammered out in advance by staff would be dangerous, raising the prospect of another summit deal with no more specifics on how to denuclearize the North than the Singapore one had.

In his speech last week, Mr. Biegun acknowledged that the United States and North Korea had yet to come up with “a specific and agreed definition” of the complete denuclearization of the Korean Peninsula, the goal that both leaders pledged in Singapore to work toward.

Analysts have long warned that Mr. Kim could try to give up just enough of his nuclear weapons program to create the illusion of progress, allowing Mr. Trump to claim victory while leaving unchanged the North’s long-term goal of being recognized as a de facto nuclear weapons state.

“This is like the train racing ahead without even knowing where its final destination is,” said Cheon Seong-whun, an analyst at the Asan Institute for Policy Studies in Seoul. “If they produce another half-cooked agreement in the second summit and fail to specify what their final goal is, it would only help make North Korea’s nuclear arsenal a fait accompli.”

When Mr. Kim met with Mr. Moon in Pyongyang in September, Mr. Kim said the North was willing to take significant actions toward denuclearization — including the permanent dismantlement of its facilities in Yongbyon, a key site for producing nuclear bomb fuel — if Washington took “corresponding” steps.

Mr. Biegun said he would discuss those measures while in Pyongyang. He also indicated that the Trump administration was softening its position to make a deal possible.

He said the United States was ready to take actions “simultaneously and in parallel” with the North as denuclearization proceeds. In the past, Washington insisted that the North take significant steps of its own, starting with the full disclosure of all of its nuclear assets, before expecting any rewards.

But Mr. Biegun said last week that a comprehensive disclosure of such assets could come “at some point.” He even indicated that Washington might ease sanctions against the North before the North denuclearizes completely.

”We didn’t say, ‘We won’t do anything until you do everything,’” Mr. Biegun said.

“Without a negotiated road map, the denuclearization process lacks transparency, accountability and a decent chance of success,” Mr. Easley said.