SINGAPORE – An animated otter against a green background will now show up on the SafeEntry check-in pass of some TraceTogether app users when they clear vaccination and test status checks.

In an update on the TraceTogether website at around 10.20am on Thursday (Nov 11), GovTech said this applied to those who are using version 2.11 and above of the app.

Those using an older version of the app can update to the latest version.

“The green and white passes were designed to enable quick entry at places with Vaccination or Test status checks,” said GovTech, adding that the green background will allow staff to see the pass from a distance and clear queues quickly.

It said the animated otter will allow venue staff to easily ensure that the person checking in is not using a screenshot.

GovTech added: “Plus, what’s not to like about a cute floating otter?”

In order to get a green background, also known as a green pass, a person must have a green vaccination status on his home screen and a cleared test status where applicable.

Those with a green pass simply need to show that page to venue staff, instead of tapping back to their app’s home screen.

Those who are unvaccinated and do not have a cleared test status will have a white background on their check-in screen, also known as a white pass.

They will need to provide reasons or documents to be allowed entry at places that require vaccination or test status checks.

White passes will also appear for those who use the group check-in function, said GovTech, citing “privacy and security reasons”.

In such cases, everyone in the group will need to show staff their vaccination and test status after they have shown the group check-in pass.

“We understand this may create inconvenience, but your data privacy and security takes priority,” said GovTech. 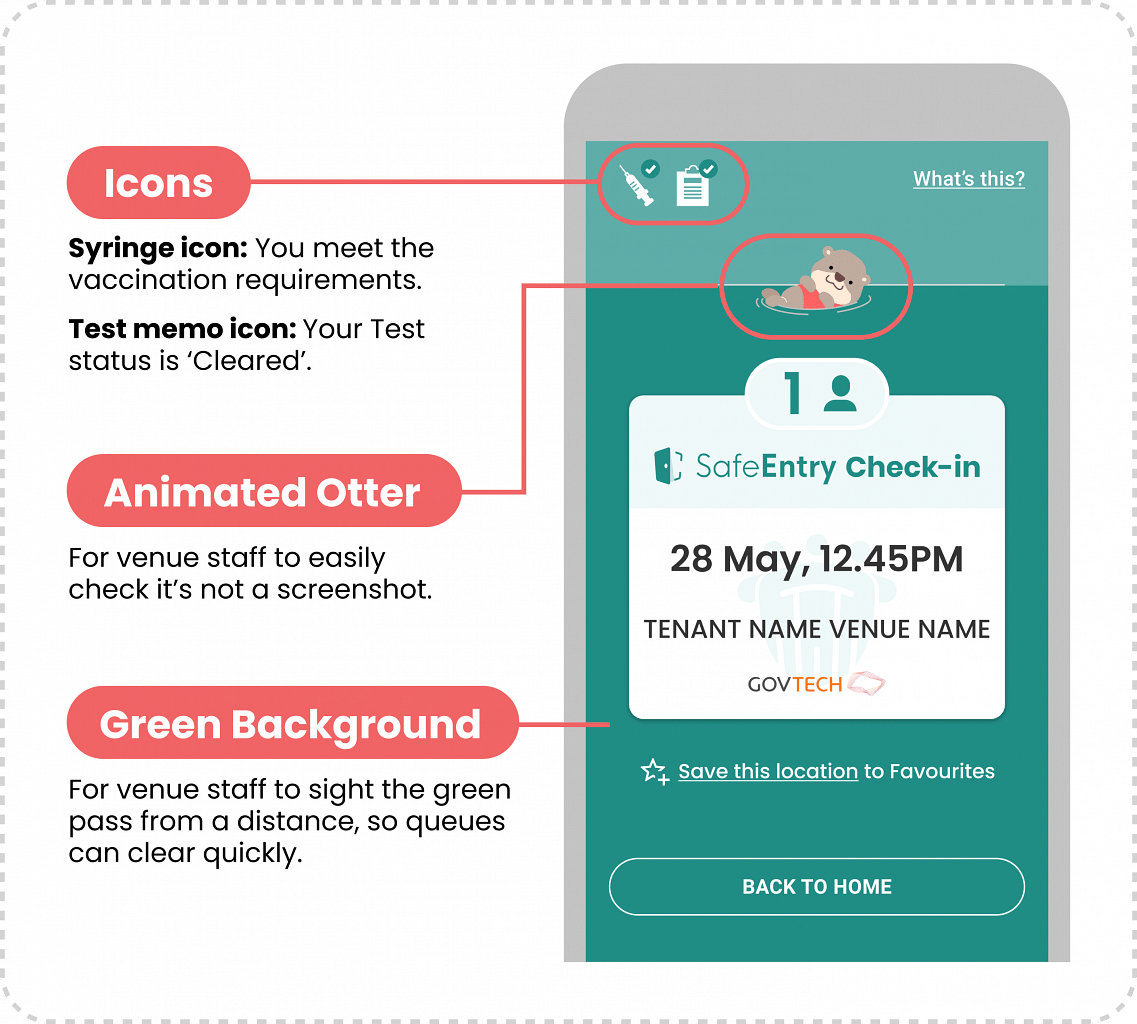 The green and white passes only show when someone checks in using the SafeEntry QR code. Check-ins done by tapping the app against a SafeEntry Gateway Box or SafeEntry Business App will not trigger the display of the passes.

Most users on online forum Reddit welcomed the update, with some praising the inclusion of the animated otter.

“Better late than never, and I like the otter and I like that it’s used to make sure it’s not a screenshot,” wrote one.

However, some questioned whether checking in at venues is still necessary.

On Monday, Singapore’s director of medical services Kenneth Mak was asked whether contact tracing is still being carried out given the high number of daily cases and the goal of living with endemic Covid-19.

Associate Professor Mak said at the time that contact tracing is still ongoing, but it is now being done in a more targeted manner, focusing on clusters and locations with vulnerable people.