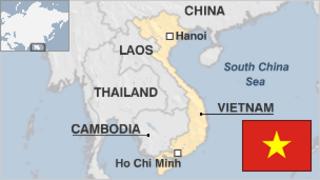 Vietnam, a one-party Communist state, has one of south-east Asia’s fastest-growing economies and has set its sights on becoming a developed nation by 2020.

It became a unified country once more in 1975 when the armed forces of the Communist north seized the south.

This followed three decades of bitter wars, in which the Communists fought first against the colonial power France, then against South Vietnam and its US backers. In its latter stages, the conflict held the attention of the world.

The US joined the hostilities in order to stem the “domino effect” of successive countries falling to Communism.

Tran Dai Quang was elected to the largely ceremonial post of president in January 2016, and died suddenly in September 2018. His vice-president, Dang Thi Ngoc Thinh, took over on an acting basis.

She is the first female head of state of the Republic of Vietnam.

The Communist Party holds the real power in Vietnam. It appointed Nguyen Phu Trong as its secretary-general in January 2011, replacing Nong Duc Manh, who retired after 10 years in the post.

He took over as Vietnam faced mounting economic problems, including rising inflation, a growing trade deficit and a weakening currency.

Nguyen Phu Trong is seen as a conservative.

Nguyen Xuan Phuc was elected to the post of prime minister by parliament in April 2016, after being picked to succeed outgoing leader Nguyen Tan Dung at the Communist Party’s congress in January.

Mr Phuc, 61, pledged to improve the business climate and crack down on corruption.

Unlike his charismatic predecessor, he is seen as a team player and a technocrat ready to stick to the party line.

The Communist Party has a strong grip on the media.

Media outlets and journalists risk sanctions for broaching sensitive topics and for criticising the government. But some press titles and online outlets do report on corruption in official circles.

There were 64 million internet users by the end of 2017, comprising around 66% of the population (Internetworldstats.com).

1954 – Vietnam is partitioned between North and South. Conflict between the two rival states rages for the next two decades, in what is known as the Vietnam War or the Second Indochina War. The US is heavily involved in support of the South.

1975 – Southern cities fall one by one until communist forces seize Saigon.

1976 – Vietnam is reunified as the Socialist Republic of Vietnam. Hundreds of thousands flee abroad, including many “boat people”.