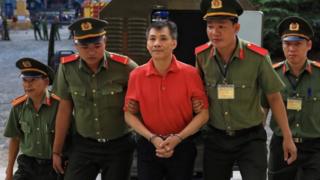 A court in Vietnam has sentenced a US citizen to 12 years in prison after finding him guilty of attempting to “overthrow the state”.

Michael Phuong Minh Nguyen, 55, had admitted he wanted to incite protests in Vietnam, his lawyer told the BBC.

But he denied more serious charges of planning to attack government offices in Hanoi and Ho Chi Minh City with petrol bombs.

Nguyen, who was held last year, will be deported after serving his sentence.

Despite major economic reforms in recent years, Vietnam remains a one-party Communist state where criticism of the authorities is not tolerated.

What happened in court?

Nguyen and the three other defendants were found guilty on Monday after the trial that lasted just half a day.

He said there was no evidence that the his client had planned to use petrol bombs to attack government offices.

It was not immediately clear whether the defendants would appeal.

Who is Michael Phuong Minh Nguyen?

He was born in Vietnam, but has lived in the US since he was a child.

The father of four was arrested in July 2018 during a private visit to Vietnam.

Soon after his arrest a petition was launched by activists in the US to demand his immediate release.