TOKYO — Every time Jiro Oshima wants to see his siblings, he must travel to North Korea.

Mr. Oshima, 79, a retired schoolteacher in Japan, takes a flight to Beijing, then another to Pyongyang, carrying small gifts like candy and underwear, and items that his siblings can sell: baby clothes, medicine, shoes.

He has made the journey more than a dozen times since the 1960s, when his parents and siblings moved to the Communist nation as part of a repatriation program that the world has largely forgotten.

Now, as President Trump and North Korea’s leader, Kim Jong-un, prepare for a second summit meeting, to be held in Vietnam this week, there is nervous anticipation that a political thaw could ease the North out of its long isolation. Perhaps nowhere is that hope stronger than among ethnic Koreans like Mr. Oshima in Japan — a community that embraced North Korea as the rest of the world cut it off.

An estimated 322,000 ethnic Koreans in Japan are members of families that arrived during Tokyo’s 35-year colonial occupation of Korea. Known as the Zainichi, most trace their roots to what is now South Korea.

Nevertheless, much of the population has long identified more closely with the North, which wooed them in the early years of the Cold War with propaganda and funding for community groups and schools.

Zainichi now live and work across Japan. Over the decades, the money they sent to relatives in North Korea helped keep the nation’s economy afloat, while spies targeted them to gather intelligence.

The Oshimas’ story is typical. Like thousands of other families, they were caught in a cul-de-sac of history, uprooted by the Second World War only to be split apart and stranded by the Cold War.

“For as long as I can remember, it has been the dream of the Zainichi people to see the North and South reunified,” Mr. Oshima said recently. “If only this could have happened a little earlier,” he added, inhaling sharply to suppress his emotions. 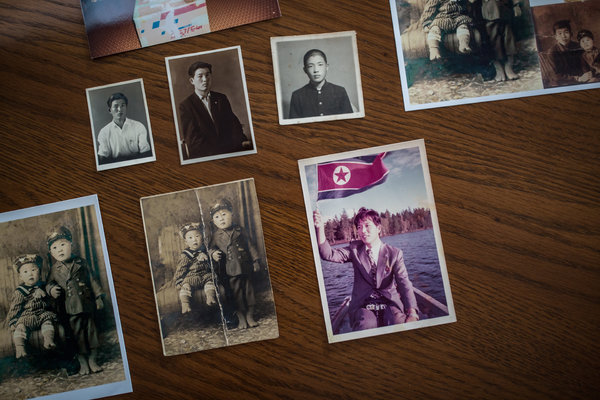 Close to two million Koreans came to Japan looking for work or were taken here as forced labor before and during World War II. Most returned after Japan’s surrender. But hundreds of thousands remained as the Korean Peninsula was divided into two nations and, a few years later, as it descended into the Korean War.

Beginning in the late 1950s, Japan offered to help repatriate the Zainichi, many of whom were attracted to North Korea’s socialist promises and an economy then larger than the South’s. Nearly 100,000 people moved, including Mr. Oshima’s parents and siblings.

Mr. Oshima, 20 at the time, had intended to follow them, and was just waiting for word from his family.

To circumvent censors, they used code. If they wrote in vertical script, as is typical in Japanese, it meant Mr. Oshima should join them. But if the writing was horizontal, that would be a warning to stay away.

When the first letters arrived, the words marched across the page, left to right.

Mr. Oshima’s parents set sail from a village in southeastern Korea in 1934, searching for work as Japan’s war machine was warming up.

They settled in a small town in southern Japan and raised five children. Mr. Oshima’s father supported them by chopping wood and selling charcoal. To disguise their heritage, they adopted a Japanese surname, which meant “big island.”

Discrimination was baked into the laws, which made it difficult for Zainichi to become citizens. Mr. Oshima hoped to study engineering but was barred from a specialized high school and ended up teaching at a Korean school.

Most of his first pupils were from families preparing to move to the North.

At the time, in the late 1950s, Japanese officials were quietly working with Pyongyang on a repatriation program.

“Their motives were economic and security concerns, enhanced by a large infusion of prejudice,” wrote Tessa Morris-Suzuki, a historian who published a book on the exodus. “They hoped to rid the country of those they saw as subversive and a welfare burden.”

North Korea saw an opportunity to replenish its work force after the devastation of the Korean War. But the South, governed by a military dictatorship at the time, was worried that an influx of Zainichi might damage its weakened economy.

Articles appeared in Japanese newspapers portraying the wonders of the North, where the authorities promised furnished apartments, jobs, rice and three months’ of coal to those who returned.

The United States quietly raised concerns that some Zainichi might be pressured into moving. But it did not object to the program, Ms. Morris-Suzuki wrote, because it wanted to protect its relationship with Japan.

Among those who left Japan was a young girl who would one day become the mother of Kim Jong-un, the North’s current leader.

Mr. Oshima’s family departed in 1960, boarding a ship from the port of Niigata on Japan’s west coast. They were going home, free at last from Japanese rule.

“We are Koreans,” Mr. Oshima recalled. “It’s about blood.”

He would never see his parents again.

“The most heartbreaking part was knowing that he lived so far from his brother and sisters, and knowing how hard it was for him,” said his wife, Keiko, 75, sitting in their Tokyo apartment, where black-and-white portraits of Mr. Oshima’s parents hang in the living room.

During that time, he taught in Korean schools run by Chosen Soren, the main Zainichi community organization, which received funding from North Korea in the early years and portrayed the nation’s founder, Kim Il-sung, as a heroic fighter against Japan.

Since 1957, North Korea has spent about $452 million to help finance Korean schools in Japan, according to Oh Gyu-sang, of the Zainichi Korean History Research Institute in Tokyo. Even now, it continues to send small amounts, Mr. Oh said.

Its schools, including a university, teach Korean language, history and culture alongside a Japanese curriculum. The Oshimas sent their three children to the schools, but Mr. Oshima grew disillusioned with their intense ideological allegiance to the North.

Mr. Oshima said he did not initially visit his family in North Korea because Zainichi were not given re-entry permits by Japan until 1974. He made his first trip the next year. His mother had died eight months earlier, his father in 1970.

A government escort accompanied him everywhere, even sleeping in the same room when he visited his siblings. Mr. Oshima paid the man 10,000 yen, about $30 at the time, to leave him alone for a night with his relatives.

North Korea let Mr. Oshima visit regularly after that first trip. But he declined to speak at length about his relatives or his travels to the country, which suffered a devastating famine in the 1990s and was squeezed by sanctions as it pursued nuclear weapons.

On some visits, Mr. Oshima helped organize humanitarian relief. Once, he worked with a group to arrange a shipment of 10 bags of rice, but saw only two on an aid flight. When he asked about the other eight, he recalled, “the official said, ‘This rice was given to us as a gift, and it is our decision what to do with it.’ ”

Mr. Oshima also sends regular packages and cash to his relatives, though Japanese sanctions limit each transfer to 100,000 yen, or about $915, and prohibit the shipment of luxury goods like jeans and lipstick.

Experts estimate that Zainichi have sent billions of dollars over the decades to North Korea. But the flow has fallen sharply because of tighter sanctions enforcement and because younger Zainichi feel less connected to the North, said an intelligence official in Japan, who requested anonymity because he couldn’t speak publicly.

Mr. Oshima made his last trip five years ago. He said he could never join his family, even in retirement. “I would not be able to make a life there,” he said.

In 1996, Mr. Oshima visited the seaside village in South Korea where his parents had lived before emigrating to Japan. During the stay, he accompanied his father’s eldest brother to pay respects to their ancestors.

Wandering among the graves, Mr. Oshima stopped short: His name, in Korean, was carved into a headstone.

To his astonishment, he learned that his relatives had declared him dead because he taught at schools run by an organization that they considered an enemy of South Korea.

“My uncle never thought that I would visit,” Mr. Oshima said, tearing up. “He said not to take it personally.”

Despite that rejection, Mr. Oshima became a South Korean citizen in 2006.

With each generation, the family’s link to North Korea fades.

One granddaughter, Misa An, 22, visited the Oshimas recently and browsed his photos from North Korea. “Do they have cellphones?” she asked. “Do they go out to eat?”

Ms. An said her grandfather never spoke much about the family’s history. But at a birthday celebration two years ago, she recalled, he talked about his parents, how they came to Japan and later left, and how he remained.

“He decided to stay behind and live alone,” she said. “And because of that, we are now all here.”