KABUL, Afghanistan — After four decades of grinding combat in Afghanistan, peace negotiations between the Afghan government and the Taliban have raised at least a possibility that the long cycle of violence might someday end.

But that milestone is a long way off. The most recent round of discussions, which began in September, have been riddled with bureaucratic hangups and monthslong debates over minor issues.

And though those talks resulted in an agreement on the principles and procedures that will guide the next round of peace negotiations, they came with a price. While the two sides met in Doha, Qatar, bloodletting on battlefields and in Afghan cities surged.

Now with peace talks scheduled to reconvene on Jan. 5, the details of what’s being negotiated next remain murky.

While both the Afghan government and the Taliban have said they will not publicly release their lists of priorities for the next round of negotiations, here’s what security analysts, researchers, and government and Taliban officials expect to be on the docket — and what hurdles these talks must overcome.

What are the end goals of these talks?

The ultimate goal of the negotiations is the creation of a political road map for a future government. The head of the government negotiation team, Masoom Stanikzai, said Wednesday that a cease-fire would be the delegation’s top priority. The Taliban, who have used attacks against security forces and civilians as leverage, seek instead to negotiate a form of governance based on strict Islamic law before discussing any cease-fire.

But getting to these larger fundamental issues will not be easy, as the two sides remain stuck on the meaning of basic terms like “cease-fire” and “Islamic.” There are many forms of cease-fire, from permanent and nationwide to partial and conditional, yet the public portion of the February agreement between the United States and the Taliban calling for the complete withdrawal of American troops mentions but doesn’t specifically mandate or fully define what it should look like. 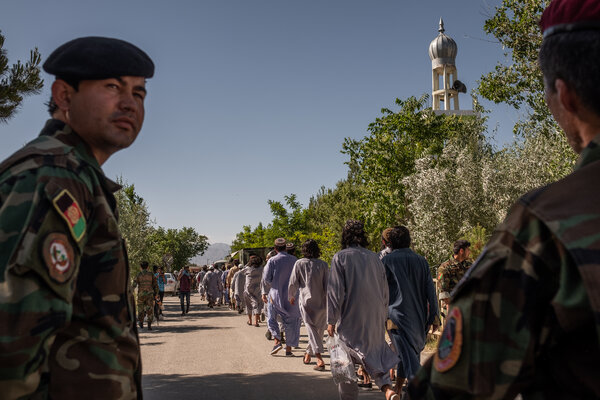 The Taliban also refuse to specify what they mean by “Islamic,” and the government’s own insistence on an “Islamic” republic has been a subject of intense debate.

“The Taliban say they want an Islamic system but they don’t specify what kind,” said Abdul Haifiz Mansoor, a member of Afghanistan’s negotiating team, pointing out that there are nearly as many systems as there are Islamic countries.

Also complicating the next round of talks is a Taliban demand that the government release more Taliban prisoners. The government’s release of more than 5,000 prisoners removed the last obstacle to negotiations in September, but President Ashraf Ghani has thus far refused to release any others.

Where does the fighting stand?

Both sides exploited violence on the ground in Afghanistan for leverage during negotiations in Doha, but the Taliban have been more aggressive in their assaults than the government, whose troops tend to stay on bases and at checkpoints, responding to persistent attacks.

The killing of security force members and civilians surged while talks were underway this fall, according to a New York Times tally, before dropping once Afghan government and Taliban negotiators announced in early December that they had reached an agreement on the procedures for future talks, though cold weather likely also contributed to the decline. At least 429 pro-government forces were killed in September, and at least 212 civilians were in October — the worst tolls in each category in more than a year.

“Killing and bloodshed have reached new peaks,” said Atiqullah Amarkhel, a military analyst in Kabul. “What kind of will for peace is this?”

“Their aim is to get into power and have a particular type of government system,” Mr. Bahiss said. “Whether they achieve it through talks or through fighting, both entail costs they are willing to bear.”

What role is the U.S. playing right now?

Though the Taliban have greatly reduced direct attacks on U.S. forces since February, the insurgent group has inexorably expanded the territory it controls by besieging local security forces.

In response, the Americans have launched airstrikes in instances where Afghan troops were under extreme duress during Taliban onslaughts. A Taliban official framed the group’s levels of violence as a direct response to airstrikes by the United States, or to military and ill-received diplomatic moves by the Afghan government.

U.S. airstrikes salvaged the crumpling defenses of Afghan units in Kandahar and Helmand provinces this fall, exposing, once more, deficiencies in Afghan ground and air forces that are under constant attack. The forces’ slumping morale has drawn increasing concern from Gen. Austin S. Miller, the commander of the U.S.-led mission in the country, according to U.S. officials.

At the same time, American troop numbers have dropped from about 12,000 in February to a projected 2,500 by mid-January, with a complete withdrawal planned by May if the agreement holds. That has left Afghan officials unsure of how their forces can hold ground without American support.

The importance of the talks to the United States was underscored in November, when Secretary of State Mike Pompeo visited Doha and met with negotiators, and again in mid-December, when the chairman of the Joint Chiefs, Gen. Mark A. Milley, did the same.

A Pentagon statement said General Milley had pressed the Taliban for “an immediate reduction of violence,” a term American officials have used several times this year that is open to a wide range of interpretations. U.S. officials are trying to establish an equilibrium on the battlefield.

Both sides are also waiting to see whether President-elect Joseph R. Biden Jr. will honor the troop withdrawal schedule or, conceivably, move to renegotiate the entire deal.

If Mr. Biden decides to leave a residual American military counterterrorism force in Afghanistan after May 2021, as some American lawmakers are proposing, Mr. Bahiss said, “the Taliban have made it clear that would nullify the entire agreement.”

What other obstacles could stall the negotiations?

Given the recriminations and suspicions in Doha, some Afghan analysts fear the talks could remain deadlocked for months.

“Mistrust between the two sides has led to an increase in violence, but nothing has been done to eliminate that mistrust,” said Syed Akbar Agha, a former leader of the Taliban’s Jaish-ul-Muslimeen group.

That could indefinitely delay serious attempts to address core government concerns like human rights, a free press, rights for women and religious minorities, and democratic elections, among others.

Taliban negotiators have said they support women’s rights, for example, but only under strict Islamic law. Many analysts interpret that to mean the same harsh oppression of women practiced by the Taliban when they governed Afghanistan from 1996 to 2001.

The deeply divided government in Kabul also worries that the Taliban will try to run out the clock until all American forces leave, whereas the Taliban contend that Mr. Ghani, who was re-elected in a bitterly disputed election last spring, is stalling to serve out his five-year term. If some form of government of national unity or a transitional government were agreed upon, Mr. Ghani would be unlikely to continue as president.

Another complication is division within the Taliban, from hard-line commanders in Afghanistan to political negotiators in Doha’s hotels. Some Taliban factions believe they should fight and defeat the Americans and the Afghan government, not negotiate with them.

Mr. Agha, the former Taliban leader, said little progress was likely unless an impartial mediator emerged who could break down the lack of trust in Doha.

“If not,” he said, “I don’t think the next round of talks will end with a positive result.”

Some analysts fear an even more ominous outcome. Torek Farhadi, a former Afghan government adviser, said, “One thing is clear — without a settlement, we are headed for a civil war.”