WASHINGTON — The State Department on Monday warned Americans against traveling to Japan as the country experiences an increase in coronavirus cases less than two months before the start of the Tokyo Olympics.

The move has little practical effect, as Japan’s borders have been closed to most nonresident foreigners since the early months of the pandemic. But the warning is another blow for the Olympics, which are facing stiff opposition among the Japanese public over concerns that they could become a superspreader event as athletes and their entourages pour in from around the world.

The Japanese authorities have insisted that they can carry off the Olympics safely. They have made clear that they intend to proceed with the Games regardless of public discontent and a state of emergency currently in place in much of the country.

Likewise, Japanese officials told the local news media that they viewed the American warning as separate from any considerations for the Games. The State Department declaration is unlikely to affect the United States’ decision to send its athletes to the Olympics. Presumably, most if not all have been vaccinated, although the Games’ organizers are not requiring participants to be inoculated.

The United States added Japan to a list of dozens of nations that have received its highest-level travel warning — “do not travel” — after the country’s virus incidence rate rose to a threshold that triggers such a declaration.

Starting in late April, large parts of the country entered a state of emergency as more contagious variants of the virus drove a rapid increase in case numbers, particularly in major cities. Osaka, part of Japan’s second-largest metropolitan area, is struggling to deal with the surge, which has put pressure on its health care system. 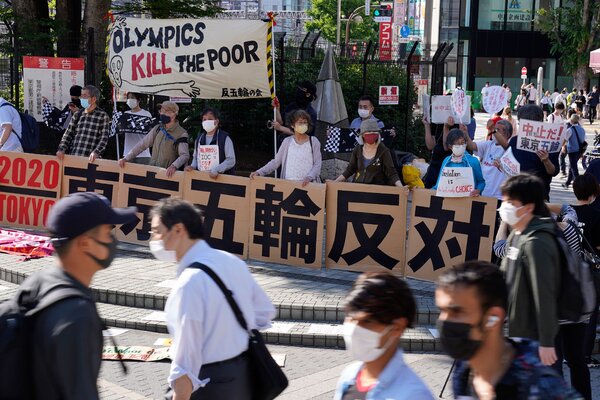 The state of emergency — under which residents are encouraged to restrict their movements and some businesses are asked to close early or suspend operations entirely — is scheduled to end on May 31. The Japanese media has reported that officials are likely to extend the declaration as virus case numbers remain elevated.

Although the numbers in Japan are low by the standards of the United States and much of Western Europe — the seven-day average was around 5,100 new cases as of Saturday — many in the country have been frustrated by the government’s response, including its slow vaccine rollout.

Less than 5 percent of residents have received a first shot of a coronavirus vaccine, putting Japan last among major developed nations in its vaccination campaign. Vaccines are not expected to be available to the general public until the end of the summer at the earliest.

The International Olympic Committee has offered to vaccinate many of the athletes and other participants who will be going to Japan. It has also offered inoculations for 20,000 people in Japan connected to the event.

But that has not allayed public concerns. About 80 percent of the Japanese public believes that the Olympics, which were delayed by a year because of the pandemic, should be canceled or postponed again, polls show. The approval rating for Japan’s prime minister, Yoshihide Suga, has fallen to the low 30s over his handling of the virus, according to a recent poll by Jiji Press.

Hundreds of thousands of people have signed a petition calling for the Games to be canceled, and protesters have taken to the streets to denounce the event as a threat to public health. In a poll conducted last week, nearly 70 percent of companies said that the Olympics should be stopped or delayed.