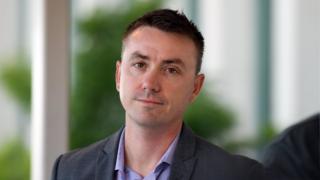 A right-wing party in Australia discussed softening the nation’s strict gun laws as it sought donations from a US lobby group in a bid for greater political power, video recordings show.

Representatives from One Nation, an anti-Islam minor party, met with the National Rifle Association last year.

One Nation has referred the media reports to police.

On Tuesday Mr Morrison asserted that Australia’s gun laws were the “world’s best”, adding “we will not be changing them”.

It comes in the aftermath of the killings of 50 Muslims in shooting attacks on mosques in Christchurch, New Zealand.

One Nation, led by Senator Pauline Hanson, won four seats in Australia’s 2016 election, but it has since been plagued by defections and infighting.

What are the allegations?

Mr Ashby is filmed saying he wants to raise A$20m (£11m; $14m). Mr Dickson says: “If we could get that amount of money, imagine, we could change Australia.”

He adds: “We are pro-guns and pro people in this party owning guns.”

It is unclear if the officials ultimately received donations.

Al Jazeera reported the pair had approached the NRA and other conservative groups in the US, such as Koch Industries.

What has been the response?

Many Australian lawmakers expressed concern on Tuesday and called on Ms Hanson to explain the videos.

Mr Morrison tweeted: “Reports that senior One Nation officials courted foreign political donations from the US gun lobby to influence our elections & undermine our gun laws that keep us safe are deeply concerning.”

An independent senator, Derryn Hinch, said it was an “obscene” attempt to water down Australia’s gun laws.

The government said it also raised questions over whether One Nation may have breached laws which ban political donations from foreign groups.

On Tuesday, One Nation said it “strongly supports the rights of lawful gun ownership within Australia”.

It criticised Al Jazeera as a “propaganda arm of the Qatari government”, and said it had referred the news organisation to Australian police over “foreign interference” concerns. The high-profile media network has defended its editorial independence in the past.

What are Australia’s gun laws?

Australia overhauled its gun laws after 35 people were killed in a mass shooting in Tasmania in 1996.

Firearms must also be registered, and owners must have a licence.

Gun control advocates have argued that aspects of Australia’s laws have been eroded in recent years.