SYDNEY, Australia — Prime Minister Scott Morrison of Australia was blindsided by reports that a state government had quietly sidestepped federal regulators and signed a deal with China to participate in that country’s contentious Belt and Road infrastructure initiative.

Mr. Morrison said this week that the agreement, signed last month between the governments of China and the state of Victoria, undermined the federal government’s ability to conduct foreign policy at a time when intelligence officials are concerned that China is trying to exert undue influence in Australia.

Mr. Morrison told reporters he was “surprised” that the Victorian government would involve itself in a “matter of international relations” without discussing it first.

“They know full well our policy on those issues and I thought that was not a very cooperative or helpful way to do things on such issues,” Mr. Morrison said.

Daniel Andrews, the premier of Victoria, said the deal would bring his state’s businesses “one step closer to unlocking the trade and investment opportunities of China’s ambitious Belt and Road initiative.” 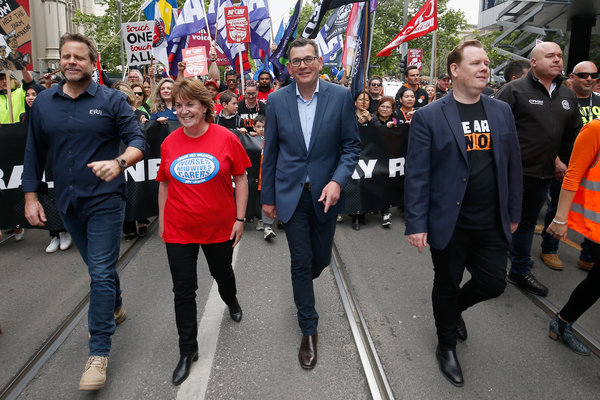 Critics, however, have characterized Mr. Andrews as naïve for failing to understand how China has used the initiative to deepen its global influence by promising to help construct grand infrastructure projects.

Others have said Mr. Andrews cut a deal with China for politically opportunistic reasons: His state government goes to the polls in less than two weeks.

Whatever his motivations, the deal sets a precedent for China to sidestep national leaders in Canberra and court states individually.

“I think this is a big part of Beijing’s agenda, to say to other states and territories that being the last to sign up will be bad,” said Michael Shoebridge, director of the defense and strategy program at the Australian Strategic Policy Institute, a think tank. “That would be consistent with Beijing’s approach with other negotiations internationally.”

It remains unclear exactly what the deal in Victoria will cover, but the Belt and Road projects in other countries have tended to be large in scale.

Under President Xi Jinping, China has pledged trillions of dollars over the past five years toward the construction of roads, power plants and ports throughout Asia, Africa and Europe. The Belt and Road initiative, a key foreign policy of Mr. Xi’s government, uses big infrastructure projects as way to win friends and spread influence.

But the money often comes with strings attached.

That money often comes with the requirement that Chinese companies be heavily involved in planning and construction, and Chinese employees are often brought in for the work, minimizing the immediate economic benefits to the country hosting the project.

Pakistan has accepted billions of dollars in loans from China in recent years for infrastructure projects, the terms of which remain largely undisclosed. China has pledged a total of more than $60 billion to Pakistan in the form of loans and investments for roads, ports, power plants and industrial parks.

But now Pakistan is seeking an emergency bailout loan of $8 billion from the International Monetary Fund, along with new loans from Saudi Arabia and China.

Sri Lanka, in debt over a port that was never viable, renegotiated the terms of its contract with China to repay billions for the investment and ended up signing the port over to Beijing under a 99-year lease. The deal last December crystallized international criticism depicting the Belt and Road Initiative as a debt trap for vulnerable countries.

Prime Minister Mahathir Mohamad of Malaysia recently canceled two major Chinese-linked projects, greenlighted by his since-ousted predecessor, that were worth more than $22 billion.

Australia has long had to balance its economic relationship with China against its strategic security alliance with the United States. Ever since John Howard was prime minister more than a decade ago, Canberra has tried to keep both powers happy.

“Howard famously argued that Australia didn’t have to choose between its economic relations with China and the alliance with the United States,” said Michael Clarke, an associate professor at the National Security College at Australian National University.

The federal government, Mr. Clarke said, needs to clarify its position on whether Australian states are allowed to receive funding for Belt and Road projects.

Canberra may object to Victoria’s decision to sign on to the initiative, but the federal government has also signed a memorandum of understanding with China, which it, too, has kept largely under wraps.

In September, Steven Ciobo, then the trade minister, signed an agreement that would allow Australia and China to cooperate on infrastructure projects in third countries under the Belt and Road Initiative. The federal government has yet to make the details of that agreement public.

The Victorian government initially refused to divulge the contents of the deal it had signed with Beijing. On Monday, however, it published a four-page document online.

“It says something about the culture of government and its distrust toward public transparency that both the federal and state governments chose not to disclose their MOUs,” said Euan Graham, a senior fellow at the Lowy Institute, a think tank. “And there is a broader point here about how the government conducts its business.”

The reaction from other politicians — the opposition leader Bill Shorten has said he supports Victoria’s deal — and their attempts to use the news for partisan politicking have created even more fissures for China to exploit, Mr. Graham said.

“What the government needs to focus on is what’s good policy,” he said. “Good policy toward China means a joined-up approach, and anything that allows those divides to be exposed is going to result in bad policy outcomes that China can at the very least rhetorically cash in on.”

Vicky Xiuzhong Xu covers the intersection of Australian and Chinese politics from Sydney, Australia. Born and raised in China, she was a producer for the Australian Broadcasting Corporation before joining The Times. @xu_xiuzhong