GOSFORD, Australia — The Rev. Rod Bower, Australia’s most famous gadfly in a clerical collar, strolled behind a crowd of demonstrators at a busy street corner, admiring their handmade protest signs.

The signs were all extensions of Father Bower’s confrontational ministry. Since 2013, he has used the small billboard outside the Gosford Anglican Church for pithy messages that merge theology with barbed liberal politics in ways that have tended to go viral.

From his perch in Gosford, a river-and-strip-mall town 50 miles north of Sydney, he was among the first clergymen in Australia to come out boldly for gay rights with a sign — “Dear Christians, some people are gay, get over it, love God” — that became a rallying cry shared millions of times online across the world.

Father Bower has also called out anti-Muslim discrimination on the signboard (“boycott the bigots and bullies, buy halal”) and poked at the far right (“we’re into Hail Marys not Heil Hitlers”).

And when some politicians criticized his stance on refugees — or when neo-Nazis swarmed his Sunday service — he fought back rather than back down.

“What they want is for Christians to support their domination system,” he said, sitting in his office where books and a guitar sit near a portrait of the Rev. Dr. Martin Luther King Jr. “They didn’t like that I challenged the system, but that’s exactly what Jesus did.”

Father Bower’s pugilism was, for a moment, just what he and the internet wanted. Social media made him a national sensation, a regular on the speaking circuit, the author of a book, “Outspoken,” and a target of scorn, not to mention death threats.

But now, after a year of pandemic reflection, something has changed. 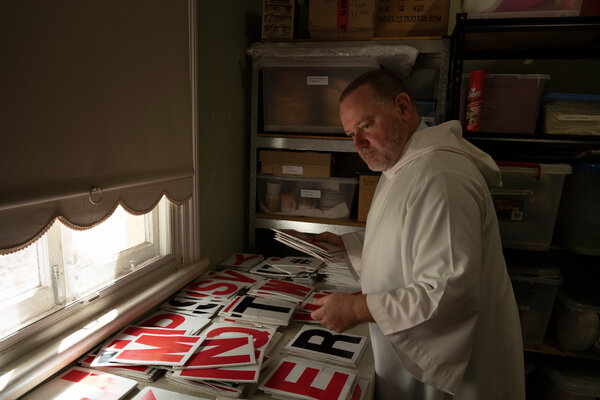 The so-called “rebel reverend” is thinking about deeper connections — maybe a one-year fellowship for young people who want to learn about Christian social justice.

He still uses the sign to communicate his convictions, just with maybe a little less spit and vinegar. Last Sunday, one side of the board read “keep Gosford nuclear free,” a position unlikely to stir up much controversy here. The other side, however, showed that he still isn’t averse to throwing a partisan punch: “put far-right on terror list.”

“You get caught up in the vortex,” he said of his time in the spotlight. “People appreciate what you’re saying and you become one of those voices.”

“Middle ground is hard,” he added, leaning back in his chair, revealing red socks beneath his black and white garb. “We only hear the extremes.”

With his short, spiky hair and tightly trimmed beard, Father Bower, 58, has something of the wombat about him — another bristly, if often lovable Australian of the wild. He’s not afraid to swear, joke about old hangovers or deliver a sermon barefoot. He’s a priest at home in the muck of existence.

He grew up in an agricultural area north of Sydney, adopted and raised by cattle farmers. His adoptive father died when Father Bower was 13, and his teenage years were mostly spent working — on the land, and as a butcher. It’s a history he has never fully left behind; “The Ethical Omnivore” sits beside religious texts on his office bookshelf.

The dislocation of being adopted, a fact he said he always knew but only began to fully process in his 20s, motivated him to seek God and the priesthood.

“It was part of my search for identity,” he said. “It came with a title and a uniform.”

Many of his parishioners found Father Bower and the church where he has served as rector for more than two decades by seeing the messages on the sign outside — not by passing by on the road, but by spotting them on Facebook.

“They really do resonate,” said Shayne Davy, a small-business owner in her early 60s who regularly attends the Monday protests.

And yet, what animates him most are connections with people, not politics, said Father Bower’s wife, Kerry Bower.

When they met in the late 1990s, she was a divorced mother of two working at a funeral home where he often came in for services. Compared to all the other priests and pastors, she said, “he was very different — far more approachable.”

He was also driven. At first, he wanted to become a bishop, but after a falling out with the church’s leadership at the time, he turned his attention to social justice.

For years before he became a national figure, he had opposed the government’s resistance to same-sex marriage and refugees in his sermons, on his church’s Facebook page, and at protests. His stance reflected his strong belief in the “radical inclusivity” of Jesus’s teaching, where there is room for outsiders, believers, doubters and misfits.

Then, people began photographing and sharing the messages posted outside the church.

The Bowers worked together to seize the moment. At one point, when attention started to peak in 2017, Mrs. Bower calculated that they were recreating the sign almost every day for more than a year.

They believed there were benefits. They had the support of their bishop (even if Anglican officials in more conservative dioceses were more skeptical), and what they wrote was being seen. Social media fame led to other platforms, from Ted Talks to international speaking opportunities.

But at times, Father Bower’s approach backfired. When he was running a long-shot campaign for the senate in 2019, Jewish groups rebuked him for comparing the processing of asylum-seekers in Australian offshore detention camps to the Holocaust.

Mrs. Bower said she now regrets at least one sign — the one calling Australia’s minister for home affairs a sodomite. Father Bower still argues that the sign’s use of the word was not meant as a sexual, derogatory term for gay men, but should have been read with biblical context, as a reference to people from the city of Sodom who did not welcome strangers. His wife has concluded that “it was just really insulting.”

There were also attacks from the far right they never expected. Soon after the “not Heil Hitlers” message in 2018, a group of neo-Nazis invaded Gosford’s Sunday service; one person carried sword. No one was hurt. Father Bower called it terrorism.

“I’m still hypervigilant because of that,” he said after a recent Sunday service. “I get nervous whenever I see a strange face heading up our driveway.”

Mrs. Bower said that even before the coronavirus, they were beginning to question their relationship to what she called the “gotcha sign” and internet fury.

“It felt like something had flipped,” she said. “It started to become counterproductive.”

When the coronavirus hit, Father Bower said he put aside his politics for the common good — even when it meant no Sunday services, then reduced gatherings.

The simple sanctuary at Gosford Anglican can still hold only 93 people legally, despite Australia’s overwhelming success in controlling the pandemic.

On a recent Sunday, there were about 50 people in masks, spread out in white chairs, with a mix of young families, retirees and visitors. The service started with guitar-led songs of praise. Just before the sermon, Father Bower fiddled with a phone on the lectern to record his message for the church’s Facebook page.

The internet, it seemed, could still be useful.

But what he had to say also reflected the push toward more discerning or considered choices that he and his wife described.

He connected a scripture verse about Jesus and people possessed by demons to online trolls and an Australian member of Parliament, Craig Kelly, who has long been notorious for spreading misinformation about climate change and Covid.

Instead of attacking Mr. Kelly, however, he preached about the need to block, delete and isolate the liars and trolls who seek to invade our lives. He told the story of an angry critic who had sent him 156 emails in a short period, leading him to report the man to the police.

“It seeped into my being,” he said.

The man turned out to be a retired teacher. What the experience revealed, Father Bowers said, was the appeal of the diabolical — and the need to keep dark forces from our psyches.

“We are told Jesus did not allow the demons to speak,” he said to his congregation. “We would do well to learn from his example.”