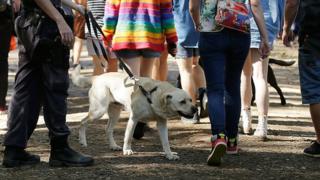 A 14-year-old boy was asked to hold his exposed genitals in one of at least 25 potentially illegal strip-searches at a Sydney music festival, an inquiry has heard.

Police carried out the strip-searches at the Lost City Music Festival, an under-18s event held at Sydney Olympic Park in February.

A public hearing into possible police abuses began in Sydney on Monday.

During the searches, none of the boys had a parent, guardian or support person present and no drugs were found, the inquiry heard.

Under Australian law, police can only carry out strip-searches if “the seriousness and urgency of the circumstances” means it is reasonable and necessary to do so.

In the case of minors, a parent or guardian must be present, unless an immediate search is necessary to protect the person or prevent the destruction of evidence.

At the inquiry, a senior police officer said an “insignificant number” of minors were strip-searched “with respect to the overall crowd” of 10,000 people.

The officer said the strip-searches should be understood in the context of concerns over drug use at the festival.

Testifying on the opening day of the Law Enforcement Conduct Commission (LECC) inquiry, lawyer Peggy Dwyer said the experience of being strip-searched had had “lasting negative effects” for some of those minors.

“Absent any legal justification, it [strip-searching] would constitute an assault punishable by imprisonment,” Ms Dwyer, who is assisting the LECC, told the inquiry.

“Little imagination is needed to understand how stressful and potentially embarrassing a strip search may be, even for law-abiding adults, even more so for young people with little experience of law enforcement in this context and limited understanding of their rights.”

What cases did the inquiry examine?

In her testimony, Ms Dwyer read out statements from the three boys that are the focus on the inquiry.

The first boy, a 14-year-old known as GEN13C, was strip-searched after a sniffer dog came close to him but did not sit down.

The boy was separated from his older brother, taken into a room and told to “hold your d**k and lift your balls up and show me your gooch [slang term for the perineum, area between the anus and genitals]”, the inquiry heard.

In his interview with investigators, the boy said he “froze” when asked to do this, leaving him “nervous” and “shaking”. He was allowed to leave and enter the festival when “nothing adverse was located”.

The second case involved a 16-year-old boy who was strip-searched after security staff spotted him fiddling with a bumbag.

The boy, known as GEN14C, was asked to “lift up his balls” and “squat and cough”, the inquiry heard. When asked to do so, GEN14C said: “Why is this happening?”

In the case of GEN15C, a 15-year-old boy, security moved him to a private area, where he was subjected to a strip-search.

The boy was told to lower his shorts, grab his penis and lift it up, the inquiry heard.

The officer, who was not wearing gloves, did not find any drugs during the search but GEN15C was ejected from the venue, Ms Dwyer said.

What did police say?

At the hearing, senior police officers testified that arrangements had been made to ensure that State Emergency Services (SES) volunteers were present for strip-searches of young people.

Asked about their suitability to do that role, one officer said “they are members of a very reputable organisation”.

In reply, the chief commissioner of the LECC, Michael Adams, replied: “Yes, but it’s not part of their ordinary duties to watch naked young people be searched by police.”

Another senior police officer said the law was too ambiguous on the question of strip-searching.

“It should be spelt out what seriousness and urgency is, because I’m sure everyone in this room would have a different opinion,” the officer said.

Asked about the government’s stance on strip searches, NSW Premier Gladys Berejiklian said reforms had been made, Nine News reported.

“We’ve put in a number of reforms, we’ve made a number of changes, we’ve involved more health and education experts,” Ms Berejiklian said.