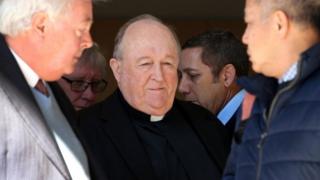 A former Catholic archbishop in Australia has had his conviction for concealing child sexual abuse quashed.

A judge in New South Wales said there were reasonable doubts about Philip Wilson’s conviction.

Mr Wilson, 68, had become the world’s most senior Catholic cleric to be convicted of covering up sexual abuse when his trial ended in May.

But he consistently denied knowing that paedophile priest James Patrick Fletcher had abused boys in the 1970s.

Mr Wilson launched an appeal at which Judge Roy Ellis was asked to consider whether prosecutors had proved beyond reasonable doubt that Mr Wilson had failed to report allegations against Fletcher after the priest had been charged.

Fletcher was convicted of nine child sexual abuse charges in 2004, and died in jail in 2006.

At the earlier trial, Magistrate Robert Stone said Mr Wilson had stayed silent out of a desire to protect the Church’s reputation. Mr Wilson avoided jail after his conviction and was serving home detention.

But Judge Ellis said Mr Wilson had been honest and consistent.

The judge said he had considered whether Mr Wilson had taken the “reasonable position of having an open mind about the allegations, so that he would not have reported them to police until he had a strong belief they were true”.

The Catholic Archdiocese of Adelaide released a statement saying: “We welcome the conclusion of a process that has been long and painful to all concerned.”

Mr Wilson resigned as archbishop in July, remaining an ordained bishop with no official role.