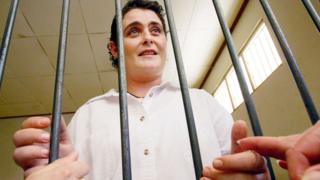 An Australian woman has become the first member of the “Bali Nine” drug smuggling ring to be released from jail in Indonesia.

The high-profile case began in 2005 when Indonesia caught nine Australians trying to smuggle heroin out of Bali.

Renae Lawrence, 41, was freed on Wednesday after spending almost 13 years in prison. She may be the only Bali Nine member ever to be released.

The two ringleaders were executed in 2015, sparking a row with Australia.

She left Bali’s Bangli prison on Wednesday afternoon to a media throng. She was expected to be taken directly from to board a plane home.

Lawrence faces the possibility of prosecution in Australia over an alleged high-speed car chase in New South Wales in early 2005.

However, Australian police say it is unlikely that she will be arrested on arriving home.

Who are the Bali Nine?

Lawrence was arrested at Bali’s Denpasar Airport in 2005 with 2.7kg of drugs strapped to her body.

Eight Australian men were also apprehended over the plot to smuggle a total of 8.3kg of heroin into their home nation.

Under Indonesia’s tough drug laws, ringleaders Andrew Chan and Myuran Sukumaran were given death sentences on conviction in 2006.

Chan and Sukumaran were executed by firing squad in 2015, despite repeated pleas by Australia for clemency.

The executions raised deep diplomatic tensions. Australia opposes the death penalty but deals heavily with Indonesia on security, trade and other matters.

Nguyen died of cancer in an Indonesian hospital earlier this year.

Why was Lawrence freed?

The other Bali Nine members also attempted to have their sentences reduced, but ultimately only Lawrence was successful. It is unclear why.

Since 2009, Lawrence has had additional cuts to her sentence at the discretion of Indonesian authorities. The tradition is granted to some prisoners on national and religious holidays.

The other Bali Nine members are ineligible for such reductions because they are serving life sentences.

Speaking to Australian media on Monday, Norman said he wished Lawrence “the best of luck”.

“She has done what she needs to do to get out,” he said.

“For me, I’m still here with a life sentence and I’m still doing all that I can to better myself. I still have hope that my sentence will come down.”