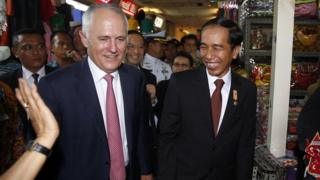 In the wake of Indonesia’s abrupt suspension of military ties with Australia, the relationship between the two countries is once again under strain.

Over the years, the execution of Australian drug traffickers, territorial breaches of Indonesian waters by the Australian Navy, spying revelations and the cruel treatment by Indonesia of live cattle imported from Australia have hit the headlines in both countries.

But a closer look at the links between Indonesia and Australia tells a more complicated story – one involving billions of dollars worth of two-way trade and tourism, co-operation on counter-terrorism and people smuggling, and strong educational and cultural links.

For all the political bluster emanating from Canberra and Jakarta, the two countries need each other. With a population of 260 million (to Australia’s 24.3 million), Indonesia is Australia’s nearest major neighbour, and its status as the world’s largest Muslim population is an important consideration for Australia’s counter-terrorism strategies.

Australia’s Department of Foreign Affairs and Trade (DFAT) describes the relationship with Indonesia as “one of Australia’s most important”.

The relationship reached a low point around East Timor independence, so it is no surprise West Papua seems to be at the centre of friction this week.

Some within Indonesia have clearly been stung by the Australian army “teaching materials”, which reportedly said West Papua was part of Melanesia and should have independence.

The matter of territory also caused hostility in 2014, when Indonesia demanded Australia cease naval incursions into its waters. Australia admitted it had entered Indonesian waters “on several occasions” while combating people smugglers. It sent a formal apology to Jakarta.

The nations’ militaries began working together more closely in the wake of the 2002 Bali bombings, which killed 202 people including 88 Australians, and the 2004 bombing of the Australian embassy in Jakarta. Defence exchanges, which stopped during the East Timor conflict, commenced again.

In December 2015, Indonesian police arrested nine people over an alleged terror threat after a tip-off that reportedly came from Australian Federal Police. The countries signed an anti-terror memorandum of understanding the same month.

In August last year, one expert rated the nations’ sharing of intelligence on counter-terrorism funding as among the best in the world.

The Indonesian island of Bali is a major tourist destination for Australians, with as many as one million visiting the island every year, according to the Bali Tourism Board.

It is not a two-way trade but Indonesia’s growing middle class of about 50 million people represents a major opportunity for Australian tourism.

Australia’s very high visa charges for Indonesians – about A$135 ($99, £80) for an individual compared to free entry for Australians – doesn’t help.

Australia’s major export was wheat, while its biggest import was crude petroleum.

Trade in services is growing – more than A$4bn in 2015-16 – with Australia exporting education and importing travel services.

Relations became strained in April 2015 when Indonesian President Joko Widodo ignored pleas from Australia to grant clemency to convicted drug traffickers Andrew Chan and Myuran Sukumaran, who were then executed.

But a successful visit by Australian Prime Minister Malcolm Turnbull to Jakarta later that year was viewed as thawing of tensions.

Former President Susilo Bambang Yudhoyono visited Australia four times during his presidency, more than any of his predecessors.

In 2010, he was accorded the honour of addressing a joint sitting of Parliament – the first by any visiting Indonesian.