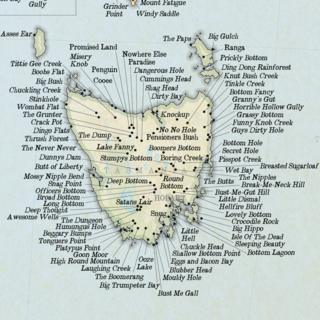 The country’s rudest and funniest place names have been highlighted by British company Strumpshaw, Tincleton & Giggleswick.

The Australian map follows similar renderings of Britain and the US.

“One of the things that I think make the Aussie map is that there are quite a few places that sound really, really Australian,” he told the BBC.

The idea came to Mr Butler after he escaped a corporate job in London and took a road trip around Britain in a “knackered old car”.

“When you’re travelling like that, you look at map and road signs and notice all these funny sounding place names,” he said.

The thought kicked in: how many of these places are there?

Mr Butler lists his personal favourites as Lovely Bottom in Tasmania, Humpty Doo in the Northern Territory and Windy Saddle in Victoria.

“There are a lot of Knobs in Australia,” he said.

“There are hundreds and hundreds of Knobs all over Australia but there is one called Prominent Nob in South Australia and that does make us laugh.”

Reporting by the BBC’s Greg Dunlop.