MELBOURNE, Australia — The sudden lockdown this summer of nine public housing towers in Melbourne that left 3,000 people without adequate food and medication and access to fresh air during the city’s second coronavirus wave breached human rights laws, an investigation found.

The report, released on Thursday by the ombudsman in the state of Victoria, of which Melbourne is the capital, said that the residents had been effectively placed under house arrest for 14 days in July without warning. It deprived them of essential supports, as well as access to activities like outdoor exercise, the report said.

The lockdown was not “compatible with residents’ human rights, including their right to humane treatment when deprived of liberty,” Deborah Glass, the Victorian ombudsman, wrote. The report recommended the state government apologize publicly to tower residents, as well as improve relationships and procedures at similarly high-risk accommodations in the city so that they might be better prepared for future outbreaks.

Though Australia has won global praise for successfully slowing the spread of the coronavirus in the country, the report was a scathing rebuke of state officials’ decision to apply stringent measures to the public housing residents, who said they felt trapped and traumatized and suspected discrimination. Several described it as a “nightmare.”

“We grew up here; we were born here,” one resident, who was not identified by his real name in the report, told investigators. “It felt like, ‘Are we in a safe place anymore, or not?’” he added. “We felt unworthy.”

The report was also a reminder that such measures were rarely applied equitably and have come at great cost to those who are economically disadvantaged. Many of the towers’ residents are minorities or immigrants. Some residents noted that police officers had swarmed around the towers, making it difficult to leave.

Speaking of the towers’ residents, the report noted: “Some had endured civil wars and dictatorships before settling in Australia, some even surviving torture at the hands of their former State. For them, the overwhelming police presence was particularly traumatic.”

When a second wave threatened to upend Australia’s progress in quashing the pandemic, the Victorian state premier, Daniel Andrews, enforced what would become one of the strictest and longest lockdowns in the world. It lasted 111 days, frustrating already exhausted and winter-weary Melburnians and earning him both vitriol and support from the public.

Mr. Andrew said that the government had no choice and that its actions were based on the best public health advice. 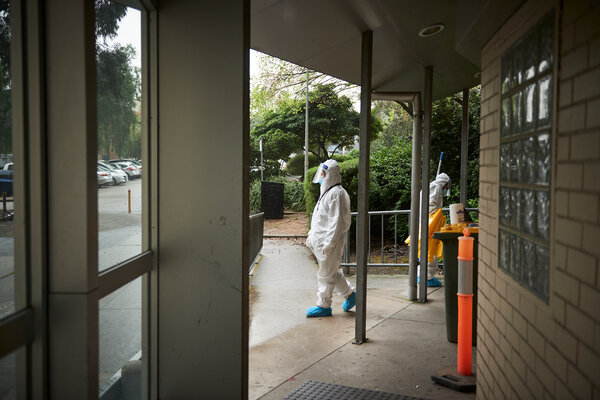 “There is no rule book for this, nobody in Victoria has done this before,” he said at a news conference in Melbourne on Thursday. “We took the steps that the experts said were necessary to save lives.”

Investigators found that although the state’s acting chief health officer had signed the order approving the lockdown, she was unaware of the government’s plans to put it into effect so suddenly. The report found that she was only given 15 minutes to consider the terms of several documents and their human rights implications before the details of the lockdown were made public.

“We may be tempted, during a crisis, to view human rights as expendable in the pursuit of saving human lives,” the report warned. “This thinking can lead to dangerous territory.”

Ebyon Hassan, 32, who lives in one of the towers in the suburb of North Melbourne and lost her father to the coronavirus in late July, said of the report, “It’s no surprise that human rights have been breached.”

She and other residents said that they had been extremely disappointed by the lack of government services in the lockdown’s aftermath.

“Everyone is just trying to heal and recover,” she added. “An apology is the least they could do.”

Australian officials have hoped that their handling of the virus would allow for a “Covid-normal” Christmas. The state of Victoria, which by late November had effectively eliminated the coronavirus for a second time, has now gone 48 days without any new, locally transmitted cases.

But this week, in a sign of the virus’s persistence, six new cases were confirmed in Sydney, Australia’s largest city, bringing to an end the city’s two-week streak without having any new, locally transmitted infections and forcing the closing of some care homes.

Despite the findings of the report, the Victorian state government maintained that its actions had been “integral” in helping to slow the spread of the disease.

The authorities “at all times acted lawfully and within the applicable legislative framework,” Richard Wynne, the minister for planning and housing, said in a statement released on Thursday.

“We make no apologies for saving lives,” he added.