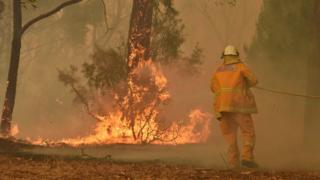 She said there was “not much left” of the town of Balmoral, south-west of Sydney, where about 400 people live.

Firefighters are struggling to contain wildfires burning across three states amid dry and hot conditions.

“I ran to my [vehicle] but my garden was already on fire here, and the driveway was on fire and the road was on fire, so I realised I couldn’t evacuate,” the 67-year-old artist told ABC.

“So the day before I had actually built myself a small kiln down the back. A coffin-sized kiln, just big enough for me to crawl inside. I hid in there for half an hour while the fire storm went over.”

Since September, Australia’s bushfire emergency has killed at least nine people, destroyed hundreds of homes and scorched millions of hectares of land.

On Saturday Australian Prime Minister Scott Morrison apologised for causing “great anxiety” by going on holiday during the mounting crisis.

What is the latest?

A number of small towns have reportedly sustained significant damage this weekend.

Balmoral was hit, for the second time in days, as wind conditions changed around the Green Wattle Creek fire on Saturday.

Residents are currently not allowed to return to the town, amid safety concerns, and an unknown number of homes have been destroyed.

“We want people to have access to their land, to their property, as soon as they can. But it has to be safe,” Ms Berejiklian said. “Even if people have lost their properties, they still want to go back to see what’s left and if there is anything they can salvage.”

It was a privilege to talk to residents from the Balmoral and Buxton areas today. Some have lost everything, some have received news their properties have been saved, & others are still waiting to find out.Their common message was deep gratitude for our amazing firefighters. pic.twitter.com/DzvXQQh6fU

Elsewhere, at least 72 homes have now been destroyed in the Adelaide Hills area of South Australia – where a 69-year-old man was found dead at his property on Saturday.

As of Sunday night there were still 98 fires burning in New South Wales, including 50 yet to be contained.

Just before 11pm, there are 98 bush and grass fires burning in NSW, 50 are still to be contained. More favourable conditions today have allowed firefighters to work on assessing the damage from the last couple of days and focus on containment options. #nswrfs #nswfires pic.twitter.com/up84cgPwCz

Officials said they were hoping to exploit cooler conditions over the coming days to try to contain the fires.

How are officials responding?

Australian Prime Minister Scott Morrison has apologised for taking a holiday to Hawaii during the crisis.

“I get it that people would have been upset to know that I was holidaying with my family while their families were under great stress,” he said on Sunday.

Speaking after a briefing with fire officials, he said he knew Australians were anxious about the fires but insisted that the emergency response was “the best in the world”. 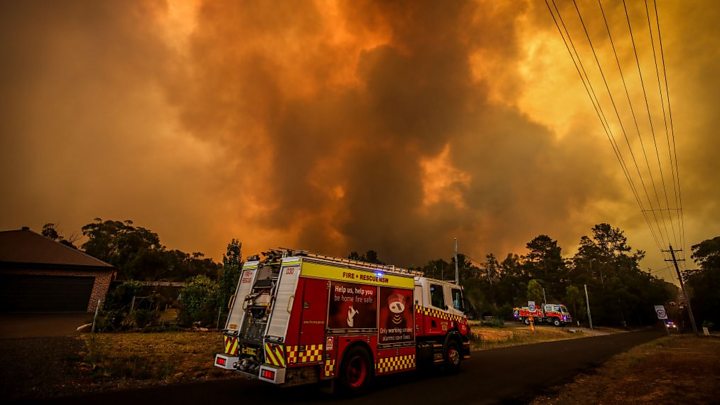 Many Australians have accused Scott Morrison’s government of inaction on global warming, with criticism growing as a heatwave broke records across the country and worsened the fires.

Although climate change is not the direct cause of bushfires, scientists have long warned that a hotter, drier climate would contribute to Australia’s fires becoming more frequent and intense.

Protesters gathered outside his home, before he cut his holiday short, to show their opposition to his policies.

The two men died when their truck was hit by a falling tree near a fire front, causing it to roll off the road.

“When our volunteers go out there, they do it for so many reasons – but I can’t help thinking they do it for love of family,” the prime minister said, in tribute. “Family is community, and they were out there defending their communities on that fateful night,.”

What is driving the fires?

A combination of record temperatures, low humidity and strong winds have worsened the struggle to deal with the bushfires.

“We are in a period of unbelievable drought and some areas haven’t seen rain for more than 12 months”, NSW Rural Fire Services Inspector Ben Shepherd told the BBC.

“These fires are likely to continue to spread well past Christmas”, he added. 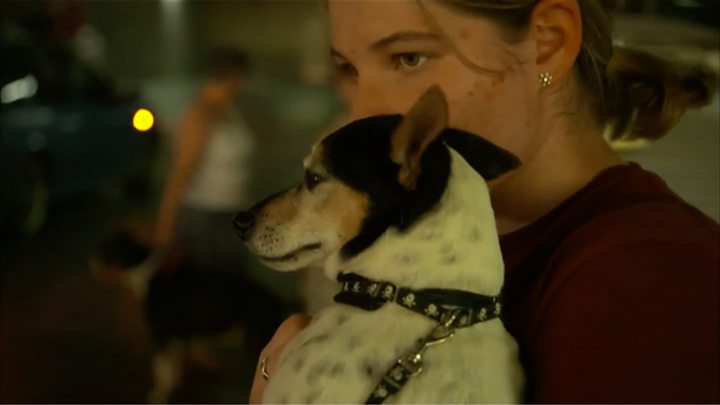 “We will not get on top of these fires until we get some decent rain – we have said that for weeks and months,” Mr Fitzsimmons said.

Rain is forecast in some fire-struck parts of New South Wales on Tuesday and Wednesday – but another period of dangerously hot weather is expected next week.

Weather officials say no major rainfall is expected in the next two months.

Are you in the affected region? If it is safe to do so, email [email protected].