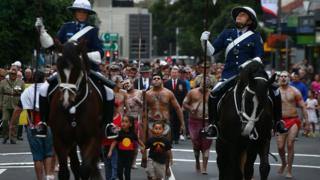 A decision to ban the Aboriginal flag and other forms of recognition from Anzac Day services in Western Australia (WA) has sparked widespread backlash.

Each year, solemn ceremonies are held on 25 April in Australia and New Zealand to commemorate veterans and soldiers.

But a veterans’ organisation said it would no longer allow Aboriginal displays at its services in the state.

It added that all content, except the NZ anthem, must be in English.

The Returned Service League (RSL) has previously been criticised for ignoring and diminishing the service of Aboriginal soldiers in World War One and other conflicts.

The decision follows a move last year where the Ode of Remembrance was read at a ceremony in an Aboriginal language, the Australian Broadcasting Corporation reported.

Critics, among them indigenous and non-indigenous lawmakers, have called the move “offensive” and demanded it be reversed.

The new policy for the state’s RSL also prohibits Welcome to Country and Acknowledgement of Country ceremonies – which have become commonplace around Australia.

The brief protocols acknowledge indigenous connection to the land, and are commonly read out or performed at the commencement of a formal gathering or event.

However, the RSLWA said such gestures at Anzac Day or Remembrance Day ceremonies would be inappropriate.

“While having utmost respect for the traditional owners of land upon which such sites and memorials are located, RSLWA does not view it appropriate that a Welcome to Country is used at sites that were specifically established to pay homage to those who died and who came from a wide range of cultural backgrounds,” their policy reads.

Anzac Day has become a flashpoint for controversy in Australia in recent years, and sparked debates on national identity.

Critics say the “Anzac” legend, which focuses on Australia and New Zealand’s campaign at Gallipoli in World War One, prioritises a white-Anglo narrative and glorifies a battle where many Allied soldiers died.

According to the Australian War Memorial, at least 1,000 indigenous Australians are recorded to have fought for their nation in WW1, and “the real number is probably higher”.

“It is not known what motivated Indigenous Australians to join the Australian Imperial Force (AIF), but loyalty and patriotism doubtless played a part,” says the memorial’s website.