MELBOURNE, Australia — On Nov. 9, a Somali-born man named Hassan Khalif Shire Ali set his car on fire in the heart Melbourne’s Central Business District, and then began to attack random bystanders with a knife.

Before the police shot and killed Mr. Ali, he managed to kill one man and seriously injure two others.

The man he killed was Sisto Malaspina. He was 74, and the longtime owner of Pellegrini’s, a cafe unlike any other in Melbourne, and perhaps all of Australia.

Two days later, I went and stood outside Pellegrini’s along with hundreds of other mourning customers and friends. The Red Cross was on hand with therapy dogs. Flower bouquets were piled around the building, and handwritten tributes papered the windows.

One note written in wobbly scrawl read: “Sisto, you are truly a Melbourne icon. Our hearts are broken.”

The attack, which is being treated by the police as an act of terrorism, was deeply shocking to Melbourne on a number of levels. It leaves the city grappling with the loss of two lives — that of Mr. Malaspina and his attacker — which between them encapsulated all of Australia’s greatest hopes and fears around immigrants and what they bring to our shores.

But the death of Mr. Malaspina is especially cruel and his life is worth contemplating.

A few years ago, after more than two decades living in the United States, I set out to write a loving tribute to my hometown of Melbourne. The resulting story was big and unwieldy and full of longing. Its central question was: what is it about Melbourne that is so magical?

The answer to that question might well be: Pellegrini’s.

In my ode to Melbourne, I told the story of the place. It was the city’s original espresso bar and when it opened in 1954, it paved the way for the incredible cafe culture for which the city (and this country) is now known. I quoted my father, who remembers the cafe’s opening as being “the beginning of Melbourne becoming what it is.”

The story of Pellegrini’s really is the story of Melbourne, the story of wave after wave of immigrants giving the city its multifaceted vibrancy. It helped build Melbourne’s European-style devotion to pleasure, where good food came from casual cafes as often as from fancy restaurants, where coffee and wine and conversation flowed across well-worn counters. 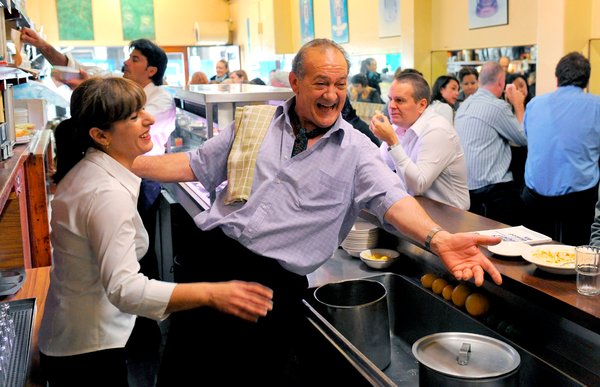 Pellegrini’s counter was long and narrow, a wooden ribbon between customer and creator. In almost every photo you see of it there is conversation between a customer and a smiling gesticulating Sisto. Usually, he is the photo. He was Pellegrini’s.

Mr. Malaspina was born in Italy in 1944, and came to Australia in the 1960s, one of hundreds of thousands of Italians who migrated here during the 20th century. Like many of his countrymen, Mr. Malaspina fell into the restaurant business, and in 1972 he and business partner, Nino Pangrazio, bought Pellegrini’s, the iconic espresso bar on Melbourne’s Bourke Street, just steps from Victoria’s Parliament House.

The cafe has barely changed since its opening. Its red sign is heritage listed. Its menu of simple pastas might as well be heritage listed as well — and for the last half century, the person likely to greet you when you entered was Mr. Malaspina.

Because of this, and because a visit to Pellegrini’s was such a rite of passage, Mr. Malaspina interacted with an uncommon number of locals and visitors. It’s hard to imagine one person in Melbourne who touched more lives. Whenever I returned to Melbourne, an espresso at the counter of Pellegrini’s was a necessity, and Mr. Malaspina’s hospitality and jaunty colorful kerchief were like beacons of home.

Much of Melbourne, a city deeply loyal to its own though less well known to the world than Sydney, felt the same way.

At the state funeral held for Mr. Malaspina on Tuesday, I sat with more than 1,300 attendees, who included dignitaries, state government leaders, and the wife of the prime minister.

The city’s Saint Patrick’s Cathedral provided overflow seating outside, and the service was broadcast on screens in Melbourne’s Federation Square.

—
‘Melbourne is a melting pot of these cultures’
—

A state funeral for the owner of a cafe might seem unlikely, but it gives you an idea of the love Melburnians have for this one restaurant and this one man, and the reverence Australians have for this particular type of immigrant story.

“Sisto Malaspina’s story is an Australian story,” said Victoria’s governor, Linda Dessau, during her welcoming remarks at the funeral. “He came to a country of new promise for himself and for his future family. He appreciated the opportunities that were offered to him, and he prospered from those opportunities because he worked so very hard.”

Throughout the ceremony, the violent circumstances of Mr. Malaspina’s death were only touched on in passing. Speakers focused on Mr. Malaspina’s love for his customers, and his wild sense of fashion was discussed extensively.

Harold Mitchell, a television executive who was one of several friends to provide eulogies, went so far as to tear off his black tie and jacket and don colorful alternatives in homage to Mr. Malaspina’s love of vibrant clothing.

Only Ms. Dessau, the governor, spoke directly of the attack.

“The mark of the man is that so much high praise had already been written about him well before last week’s terrible tragedy could ever have been imagined,” she said. “And, indeed it was a tragedy, and one that we need every voice to condemn, to condemn such a wicked act and the perpetrator of it.”

“But these are the times when we need to stick even closer to one another, to seek unity not conflict, and to hold to our hopes much more closely to our fears, even when it’s hard.”

For many Australians, that trick — of holding out against fear — is hard. Polls show support for immigration waning. Prime Minister Scott Morrison is now proposing stricter limits on immigration, and has been accused of using this particular tragedy as a political tool to vilify Muslim immigrants.

In contrast, Mr. Malaspina’s son, David Malaspina, struck a tone of inclusivity during his remembrance. He stressed that his father made sure to treat every customer the same, regardless of race, religion, or social standing.

Many Melburnians who knew and appreciated Sisto will remember that forever.