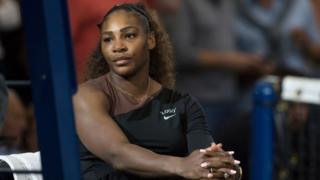 A controversial cartoon of Serena Williams published in an Australian newspaper last year did not breach media standards, a press watchdog says.

The cartoon depicted Williams jumping above a broken racquet next to a baby’s dummy in the US Open final.

Critics complained that the caricature used racist and sexist stereotypes of African-American people.

The Australian Press Council noted that some had found the image “offensive”, but accepted the publisher’s defence.

Williams sparked controversy during her loss to Naomi Osaka in September for her on-court behaviour where she accused the umpire of sexism and being a “thief”.

The Herald Sun newspaper and cartoonist Mark Knight have consistently called their depiction a comment on Williams’s behaviour, denying it was racist or sexist.

The press watchdog said the newspaper had “sufficient public interest in commenting on behaviour and sportsmanship”.

The cartoon went viral in September, drawing criticism globally. The National Association of Black Journalists in the US denounced it as “repugnant on many levels”.

Public complaints centred around the portrayal of Williams with “large lips, a broad flat nose… and [being] positioned in an ape-like pose”, said the watchdog.

This contrasted with the depiction of Osaka, whose father is Haitian and mother Japanese, “as white with blonde hair”.

However, the watchdog ruled that the cartoon did “not depict Ms Williams as an ape, rather showing her as ‘spitting the dummy’, a non-racist caricature familiar to most Australian readers”.

Spitting the dummy is an Australian colloquialism for someone who reacts to a situation in a bad-tempered or petulant manner.

Knight told the Australian Broadcasting Corporation he was “very happy” about the watchdog’s ruling.

The Australian Press Council is the chief watchdog for complaints about Australian media, but does not have the power to issue or enforce penalties.

We will use your email address only for sending you newsletters. Please see our Privacy Notice for details of your data protection rights. Detectives believe…