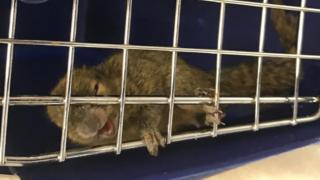 A man was intercepted at an Australian airport after flying from Indonesia with two live squirrels smuggled in his luggage, authorities say.

The Australian resident may face criminal charges after the animals were detected at Brisbane Airport last week.

Both squirrels were put down after being deemed a biosecurity risk, Australian authorities said.

The nation has strict quarantine laws that famously caught out actors Johnny Depp and Amber Heard in 2015.

The squirrels allegedly travelled in checked-in luggage from Bali, which is about six hours by plane from Brisbane and a popular holiday destination for Australians. Authorities have not named a possible motive.

“The frightening thing around that case around the two squirrels is that half of his Instagram followers thought it was a great idea to do that,” Agriculture Minister David Littleproud told the Australian Associated Press.

“These animals bring pests and diseases that could actually hurt many Australians so it’s important that we aren’t ignorant to biosecurity.”

People who violate Australia’s biosecurity laws face fines or up to five years in prison, according to the Australian Border Force.

In 2016, Depp and Heard had to record an apology video after smuggling their dogs, Pistol and Boo, into Australia and becoming embroiled in a row that drew much attention.

Last month, former NBA player Lamar Patterson was also stopped at Brisbane Airport with his pet dog. The dog was seized and deported.

Temperatures are expected to remain bitterly-cold this week with a new weather system moving in from the north on Wednesday. Thermometers could tumble to as…