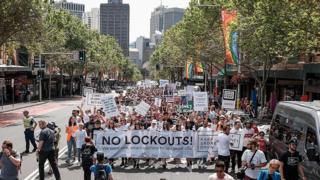 The so-called “lockout” laws, enacted in 2014, installed bar curfews in popular areas and restricted when alcohol could be served.

While the laws reduced the rates of drunken violence, critics accused them of changing the fabric of the city.

The laws will be wound back in all precincts except one – Kings Cross.

“We need to ensure we have a strong and vibrant night-time economy that reflects our position as Australia’s only truly global city,” said New South Wales Premier Gladys Berejiklian.

She said the changes would begin on 14 January.

The laws were introduced in 2014 following immense public anger over the deaths of two 18-year-old men in the Kings Cross entertainment district.

Both men died from separate, random acts of alcohol-related violence after being hit – or “coward punched”, as it became known locally – by strangers.

Under the laws, the public has been prevented from entering bars or nightclubs after 01:30. Takeaway alcohol sales at shops are banned after 22:00.

Police and health authorities reported the rates of public violence had dropped after the laws were brought in.

But it also damaged late-night trade, with critics accusing the laws of directly forcing the closure of 180 licensed venues.

The changes mean people will now be able to enter bars after 01.30, and order alcoholic drinks until 03:30.