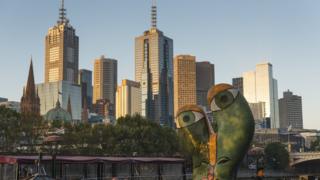 Australian police say they have arrested three men who were plotting to commit a terror attack in Melbourne.

The group had been attempting to source a semi-automatic rifle to kill as many people as possible in a crowded place, authorities said.

The suspects – aged 21, 26 and 30 – were allegedly inspired by the Islamic State group.

There was no ongoing threat to the public, said Chief Commissioner Graham Ashton.

Mr Ashton said the men had not settled on a location for the alleged attack, but their planning had “escalated” in recent days.

“There was a view towards a crowded place, a place where maximum people would be attending, to be able to kill, we allege, as maximum an amount of people as possible,” he told reporters on Tuesday.

Earlier this month, a knife-wielding attacker killed one man and injured two others in Melbourne in what police said was a terror attack.

Mr Ashton said the suspects arrested on Tuesday had become “more energised” in the past week, but it was unclear whether this was due to increased public discussion about terrorism.

The three men, all Australian citizens of Turkish descent, were arrested in police raids in Melbourne’s north-west on Tuesday.

They had been tracked by authorities since last year and recently had their passports cancelled, Mr Ashton said.

Police said the men had been in the process of acquiring a semi-automatic .22 calibre rifle.

“If we had not acted early in preventing this attack, we’ll allege the consequences would have been chilling,” said Australian Federal Police Assistant Commissioner Ian McCartney.

The three men were expected to charged with terror-related offences later on Tuesday.

Australian police have charged 90 people in counter-terrorism investigations since 2014, when the nation’s terror threat level was raised to “probable”.