Three US firefighters who died when their air tanker crashed while battling blazes in Australia have been identified.

The cause of the C-130 Hercules crash is not yet known.

It crashed in an active fire zone in the Snowy Mountains, south of Canberra, said the NSW Rural Fire Service.

Since September, Australia has battled a bushfire crisis which has now killed at least 33 people. More than 70 bushfires are still raging across NSW alone.

Who were the victims?

Mr Fitzsimmons said the experienced and “well known” crew had been contracted to Australia to help fight the unprecedented bushfires this season.

Mr McBeth, from Great Falls in Montana, was a “highly qualified and respected C-130 pilot with many years of fighting fire” in the military and privately, Coulson Aviation said.

His love for his wife Bowdie and children Abigail, Calvin and Ella was “evident for anyone who spent time around him”, it added.

Mr Hudson, from Buckeye in Arizona, had previously served for two decades in the US Marine Corps, including as a C-130 pilot. He is survived by his wife, Noreen.

Mr DeMorgan Jr, from Navarre in Florida, had spent 18 years in the US Air Force as a C-130 flight engineer.

His passions had been “always flying and his children” Lucas and Logan, Coulson Aviation said.

What’s been the reaction?

Mr Fitzsimmons said on Thursday: “[The plane] was operating as it routinely does with water bombing activities…there is no indication at this stage of what’s caused the accident.”

The state government ordered flags to be flown at half-mast on Friday, in tribute to the three men.

The RFS tweeted that other North American firefighters in Australia had held a minute’s silence.

Crews from the US and Canada, who are wrapping up their deployment to the #nswfires, have held a minutes silence as a mark of respect for the three American crew members killed in yesterday’s Large Air Tanker crash. We thank these crews for their support. #nswrfs pic.twitter.com/UNCt9APUMA

In another fire-hit state, Victoria, the Country Fire Authority (CFA) tweeted its thanks to US firefighters who had just arrived on deployment.

Thank you to the 41 firefighters from across the US who have arrived today to assist in managing Victoria’s ongoing and significant fire threat. Following briefing and training sessions, they will join local crews fighting fires in East Gippsland. pic.twitter.com/VMOCa5btPK

Australian Prime Minister Scott Morrison said he was “deeply saddened” by the tragedy, and offered his condolences to the men’s families.

Fires in southern Australia are expected to peak in February and continue into April. 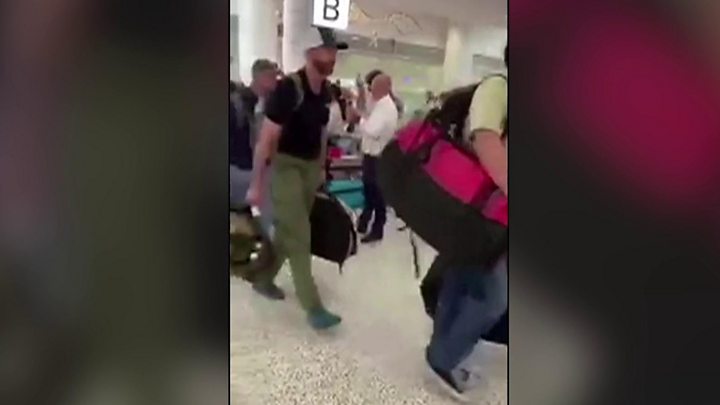 We will use your email address only for sending you newsletters. Please see our Privacy Notice for details of your data protection rights. King Willem-Alexander…

We will use your email address only for sending you newsletters. Please see our Privacy Notice for details of your data protection rights. Meghan became…

CORONAVIRUS cases are now above 20 per 100,000 of the population in every local authority in England, data from Public Health England (PHE) has revealed.…

A creep repeatedly slapped a 15-year-old boy’s buttocks inside a Brooklyn subway station this week, police said. The boy was walking on the platform of…

Sending large files and opening 'dodgy' links when connected to someone else's network are among the top 'Wi-Fi-faux pas', new research has revealed. A study…