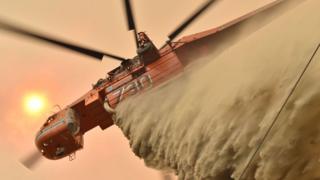 Large parts of Australia have been devastated by the worst wildfires the country has seen in decades, with huge blazes tearing through bush, woodland and national parks.

Record-breaking temperatures and months of drought have helped the fires burn an estimated 10 million hectares (100,000 sq km) of land since 1 July.

What are the Australian authorities doing to stop the fires and could anything have been done to prevent them?

Fighting the fires is a huge task

Bushfire conditions eased over the weekend, giving fire crews a period of temporary respite. But authorities say the huge fires will persist until there is substantial rainfall. More hot weather is expected next week and the risk was far from over, they said.

Thousands of firefighters are still battling blazes across large swathes of Australia – ranging in size from small fires to infernos burning across hectares of land.

Entire towns have been engulfed and residents across several states have lost their homes. At least 28 people have died.

State and federal authorities have been working together to try to stem the spread. While they have managed to contain some within a matter of days, the biggest blazes have been burning for months.

Many people are involved in the battle

At least 3,700 firefighters are on the ground at any one time across the country during the worst periods, according to the country’s state fire services. Most are in the worst-hit states of New South Wales (NSW) and Victoria.

When fires have been at their worst, about 2,700 firefighters have been battling the blazes at any one time in NSW alone.

Ben Shepherd, of the NSW Rural Fire Service, said his colleagues had dealt with 4.2m hectares of burning land this season, compared with the typical 300,000 hectares.

“It’s been an incredibly long campaign,” he said.

Fire crews across the country have been joined by 3,000 army, navy and air force reservists who are assisting with search and rescue and clean-up efforts.

Further support coming from the US, Canada, and New Zealand, who have sent additional teams and equipment to help.

They’re using a lot of kit

Fire crews are using a combination of aircraft and land-based equipment to fight the fires.

NSW Rural Fire Service says it has about 100 aircraft in the skies every day when the fires are bad, while Victoria Country Fire Authority says it has more than 60.

They include helicopters, fixed-wing aircraft and larger air-tankers, most of which can be used to “firebomb” water onto fires or drop retardant from the sky above.

Overall, more than 500 aircraft are available for firefighting across Australia, according to the National Aerial Firefighting Centre, which has its own fleet of about 130 aircraft ready to help boost a state’s response when required.

The dangers facing crews were highlighted on Thursday, when a waterbombing helicopter crashed into a reservoir in the Bega Valley Shire region as it was refilling. The pilot, contracted by the Rural Fire Service, survived.

On the ground, teams are also using firefighting trucks and “heavy plant” equipment, such as bulldozers and excavators, in order to move earth, clear areas of debris and create “firebreaks” – gaps in vegetation that help slow the advance of flames.

NSW Rural Fire Service says it has more than 750 vehicles on the ground on a given day.

The army said it had sent supplies, personnel, and vehicles to the devastated Kangaroo Island, near the city of Adelaide in South Australia.

The army also sent out reconnaissance and assistance missions in NSW and Victoria.

But the government has faced criticism for its response

The prime minister – a keen supporter of the country’s coal industry – has faced fierce criticism over his apparent failure to anticipate the crisis, his slow response to the disaster and his reluctance to accept a link between the bushfires and climate change.

Mr Morrison was forced to apologise for going on a family holiday to Hawaii last month as the crisis escalated and he has been heckled by locals in NSW and Victoria.

In response, the Australian leader has expressed regret over his handling of the crisis and said he would seek a royal commission review – a type of public inquiry – into the country’s response. He has also promised A$2bn ($1.4bn; £1.1bn) in aid to help the country recover

But the prime minister is being urged to do more to cut Australia’s carbon emissions and tackle climate change, which is seeing the country’s average temperatures rise.

The latest figures from Australia’s Bureau of Meteorology show 2019 was the country’s hottest and driest year on record.

The conditions were caused by a climate phenomenon called a positive Indian Ocean Dipole (IOD), which was unusually strong, a rare Sudden Stratospheric Warming event, which pushed weather systems northward, as well as climate change, the bureau said.

Australia’s state of the climate report, published last year, warned that warming temperatures meant there had been a “long-term increase in extreme fire weather” as well as an extension in the “length of the fire season”.

But there have been warnings of Australia’s increased levels of fire risk since 1988 – and a 2007 report by Australia’s federal science agency predicted more intense fires would be seen by 2020, says Dr Tim Curran, senior lecturer in ecology at Lincoln University in New Zealand.

The scale and intensity of this year’s fires and the fact they are now more likely to become a common phenomenon means the Australian authorities may well have to take further steps to prepare in future years.

Professor Dale Dominey-Howes, director of the Asia-Pacific Natural Hazards and Disaster Risk Research Group at the University of Sydney, argues the current bushfire crisis – and the fact it is affecting multiple states and territories simultaneously – represented a “new normal” and the government needed to act.

“We need new approaches to disaster management – a professional paid workforce, capable of round the clock, round the year and around the country deployment, capable of responding to multiple disaster types,” he says.