The Australia Letter is a weekly newsletter from our Australia bureau. This week is written by Isabella Kwai, an Australian reporter with the bureau. Sign up to get it by email.

At first, the American preacher blended with the quiet commuters on the Sydney train. That is, until he opened his mouth. As the American, Phillip Blair, began a sermon about unborn children, an Australian reading a book interjected.

“Mate if you ask for our time, we have the right to say: no, we’re not giving it to you,” the Australian, Malcolm Frawley, said. “Why don’t you just shut up?”

The recorded exchange that followed, in which Mr. Blair plunged forward despite insistent requests from Mr. Frawley, went viral last week. Many on the internet cheered Mr. Frawley’s response, but as I watched, I wondered if there was something especially Australian about it.

A slightly different form of resistance to preaching emerged this week when a protest by vegan activists halted morning traffic in Melbourne. The protest was called “un-Australian” by the prime minister, exposing a rift between a growing population of non-meat eaters and farmers who are considered the lifeblood of Australia.

Clearly, if there’s one thing many people here dislike, it’s being told what to do or how to think. But in a country where the major political parties tend to be moderate, the secular population is growing, and the population is diversifying, are Australians becoming more frustrated with extremes, and more willing to confront deep but challenging beliefs?

After all, it’s not as if Australians aren’t activists. Last month, students across Australia joined those around to world to demand action on climate change. And in the 2017 lead-up to the passage of same-sex marriage, many campaigned fiercely both for and against.

Still, for a country that has been known to embrace its iconoclasts (see: egg boy) we can be far more suspicious of extreme individual behavior than our American counterparts. In New York and elsewhere, subway preaching is ignored rather than challenged; while there are exceptions, many Americans accept that their First Amendment brings with it a degree of uncomfortable speech.

Mr. Frawley described a different, perhaps more Australian, sensibility. In an interview with The Project, he said he spoke up because he thought faith was a private thing that shouldn’t be inflicted on others in public.

“In the age of Trump, I don’t think it helped that it was another loudmouthed American,” he added.

The vegan protest also seems to have backfired. While it convinced some to reconsider their diet, many others said that the intrusion had only encouraged them to eat more meat.

Which is why I’d like to hear from you: What makes some public protests acceptable and others more problematic? Do you think there is a right way to express strongly held beliefs in public, or should we all just leave each other alone?

Let me know what you think at [email protected]

Also, if you enjoyed our blockbuster investigation into the influence of the Murdoch family last week, the media columnist Jim Rutenberg, one of the writers behind it, will answer questions in our Facebook group today. The reporting involved visits to three continents, including Australia, and interviews with more than 150 people.

Have a question about the story? We invite you to join the group or email us your questions at [email protected]

Now, on to the biggest stories of the week. 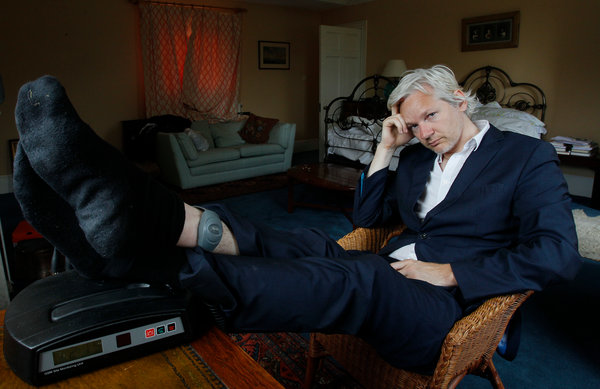 The WikiLeaks founder Julian Assange was arrested on Thursday in London to face a charge in the United States of conspiring to hack a Pentagon computer network. It’s an abrupt end to a seven-year period in which he lived in isolation at the Ecuadorean Embassy to avoid capture.

To supporters, Mr. Assange was a champion of free speech. To the United States government, he was a pariah.

But to the Ecuadorean government, he had become an unwanted houseguest.

Read how Mr. Assange became a target for the United States government, and why this case raises concerns about press freedom.

And we’re off. The federal election has been set for May 18. What’s happening next? Here’s an explainer.

• The Australian actor Geoffrey Rush won his defamation case against the parent company of a newspaper that published articles accusing him of sexual harassment.

• As Americans worry about their economy, our winning streak is about to turn 28. Still, Neil Irwin writes, Australians are aware that the good times could end.

• The hyper-realist drawings of Australian artist Cj Hendry leave viewers in awe on Instagram. But can she woo the art world?

• Australia’s lo-fi wine movement: Meet the winemakers who are part of a global effort to reject conventional thinking.

• Restaurant Shik in Melbourne has closed. In our review last year, Besha Rodell called it “such a significant leap forward for Korean food in Australia that it’s in danger of missing its audience entirely.”

Here are four of our best-read stories this week.

• Health|A Mysterious Infection, Spanning the Globe in a Climate of Secrecy: The rise of Candida auris embodies a serious and growing public health threat: drug-resistant germs.

• Science|Darkness Visible, Finally: Astronomers Capture First Ever Image of a Black Hole: Astronomers at last have captured a picture of one of the most secretive entities in the cosmos.

• Middle East|It’s Netanyahu’s Israel now: Benjamin Netanyahu’s re-election as prime minister of Israel attests to a starkly conservative vision of the Jewish state and its people.

• U.S.|In San Francisco, Making A Living From Your Billionaire Neighbors’ Trash: One of the world’s richest men and a trash picker, living a few minutes’ walk from each other.

Are there stories that have resonated with you? You can send them to me at [email protected]

… And over to you

Many shared with us your top issues for the coming federal election. Thanks to all who wrote or shared in our Facebook group. Here’s one response from a reader whose vote is based on climate change.

“Undoubtedly my vote will be based on climate change policies. As far as I can see the two parties are not so dissimilar on infrastructure/social financial policies, but the coalition is studiously ignoring the quite obvious impact of climate change — heads literally in the sand perhaps?

Neither party appears to have a comprehensive and considered let alone creative policy on the many facets of this enormous and critical issue. Labor is best of the two major parties. Unfortunately I don’t warm to the Green’s leadership but unless a local independent candidate comes up with a more holistic scheme I will vote for them — as a protest vote. At least I know that in another three years, a whole lot more young people will be eligible to vote and I imagine that even the deaf and blind will recognize that climate policy is likely to become as important budget issue and health and education. Sadly three years is a long time.”