SYDNEY, Australia — President Xi Jinping of China and Vice President Mike Pence pushed back against criticism of each of their countries’ trade practices in speeches on Saturday at an Asia-Pacific trade summit meeting in Papua New Guinea, while seeking to assure allies of their commitment to the region.

Mr. Xi and Mr. Pence spoke ahead of what is likely to be a tense meeting between President Trump and the Chinese leader at the Group of 20 conference in Argentina later this month, where they will attempt to defuse a trade war.

The Trump administration has accused China of unfair trade practices, including restricting market access, pushing American companies to hand over valuable technology and engaging in cyberespionage and intellectual property theft. It has put tariffs on hundreds of billions of dollars worth of Chinese goods; China has retaliated with tariffs of its own.

Mr. Pence, echoing warnings from Mr. Trump, said the United States could “more than double” the tariffs it had placed on $250 billion in Chinese goods.

“The United States, though, will not change course until China changes its ways,” Mr. Pence said.

China has offered a list of concessions in recent days, which Mr. Trump has called “not acceptable.”

Mr. Pence and Mr. Xi spoke at the annual Asia-Pacific Economic Cooperation summit meeting in Port Moresby, the capital of Papua New Guinea. The 21 Pacific Rim countries and territories participating in the APEC forum account for 60 percent of the global economy.

He urged Asian nations to avoid investment offers from China and to choose instead a “better option” — working with the United States — which, he said, would not saddle them with debt, a quandary some countries are facing as a result of their partnerships with Beijing. 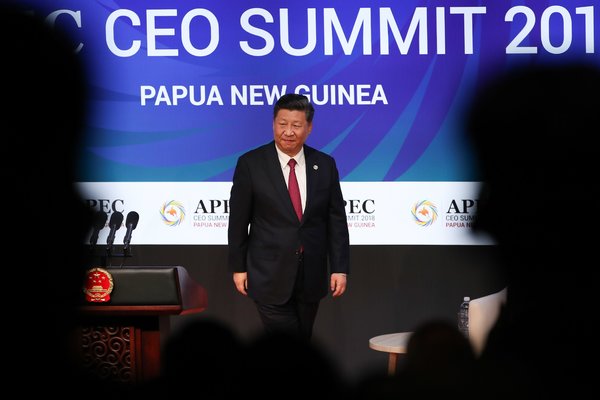 “Let me say to all the nations across this wider region, and the world: Do not accept foreign debt that could compromise your sovereignty,” Mr. Pence said.

“We don’t drown our partners in a sea of debt,” he added. “We don’t coerce or compromise your independence. We do not offer a constricting belt or a one-way road. When you partner with us, we partner with you, and we all prosper.”

Mr. Xi, perhaps anticipating the criticism, spoke before Mr. Pence and disputed the notion that accepting Chinese investment as part of the initiative called “One Belt, One Road” would compromise a nation’s sovereignty.

The initiative “is not for geopolitical purposes; it will exclude no one; it will not close a door and create a small circle,” Mr. Xi said. “It is not the so-called trap, as some people say. It is the sunshine avenue where China shares opportunities with the world to seek common development.”

Mr. Xi sought to paint China as continually opening its markets to the world.

He described the trade dispute as a choice between “win-win progress or a zero sum game.”

“Mankind has once again reached a crossroads,” Mr. Xi said. “Which direction should we choose? Cooperation or confrontation? Openness or closing doors?”

Mr. Pence and Mr. Xi may have been sending mixed messages with their speeches, said Brendan Taylor, an associate professor of strategic studies at the Australian National University.

“The extent to which Mr. Xi tried to reassure the region that he didn’t have any geopolitical ambitions — I don’t think that’s particularly convincing,” Mr. Taylor said.

He described Mr. Pence’s speech as having a “very strong ‘America First’ tone,” adding, “There’s quite a big gap between his rhetoric and what’s actually happening in the region.”

Other nations in the region were hedging their bets, he said. “The moves those countries are making relate to their uncertainties about the U.S. and the Trump strategy or lack thereof,” Mr. Taylor said.

On Friday, the Japanese prime minister, Shinzo Abe, met with Prime Minister Scott Morrison of Australia in the northern Australian port city of Darwin, the first time a Japanese leader has visited the city, which was pummeled by Japanese air raids in World War II.

The two leaders discussed economic cooperation and the possibility of the Japanese military participating in training exercises in Darwin, where about 2,000 American Marines rotate through each year.

In his speech on Saturday, Mr. Pence lauded the economic and military cooperation between the United States and its Asia-Pacific allies, and he warned China that American ships and jets would sail and fly anywhere allowed by international law.

Chinese military forces have confronted American and other foreign navies and aircraft that have entered waters in the South China Sea that China claims as its own.

“The United States of America will continue to uphold the freedom of the seas and the skies, which are so essential to our prosperity,” Mr. Pence said.

He said the United States would support efforts “to adopt a meaningful and binding code of conduct that respects the rights of all nations, including the freedom of navigation, in the South China Sea.”

He also announced that the United States would participate in an Australian-Papua New Guinea initiative to develop a naval base on Manus Island in the Bismarck Sea, in northern Papua New Guinea.

Australia and Papua New Guinea announced last month that they would upgrade a base in Lombrum, a port on Manus Island that has a strategically vital position overlooking key trade routes.