Located on a sprawling campus adorned with hanging kayaks, the 80-year-old retailer has long protected its outdoor gear from the whims of Washington by engaging in what the company calls “tariff engineering” — adjusting its products to lessen import taxes on materials from outside the United States like rubber soles, zippers and waterproof nylon.

But now Columbia worries that its approach is under threat from a president whose trade strategy leaves little room for American companies that make and sell products globally. 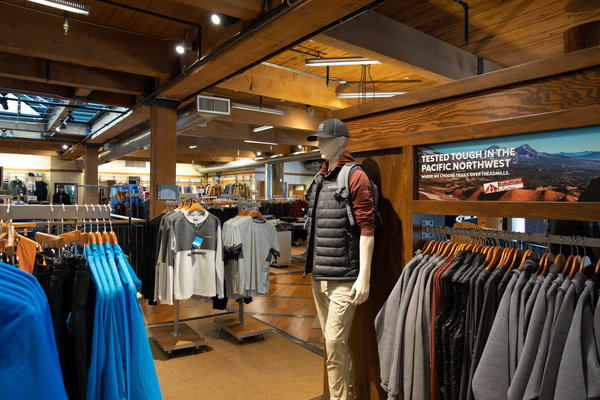 Mr. Trump’s use of tariffs as a cudgel to revitalize manufacturing in the United States is forcing changes across large multinational companies, though they may not always be the changes the president seeks. Harley-Davidson and Micron are moving production to factories in Europe or parts of Asia, while other companies have put off expansion plans amid trade uncertainty.

At Columbia, the response is to lean heavily on the company’s long experience in navigating the thicket of trade restrictions it has faced in the United States and abroad. Every fleece vest and waterproof glove stamped with the Columbia logo is manufactured abroad, and the company has come to rely on a system of pairing its designers with its team of trade experts, who recommend work-arounds that can help an item of clothing circumvent tariffs.

In a conference room filled with samples, Jeffrey W. Tooze, Columbia’s vice president for global customs and trade, showed how a small change in design can mean big money for a given product.

The addition of a super-thin sheath of fabric to the sole of a boot or shoe can help circumvent an existing 37.5 percent tariff on rubber soles imported into America. A fabric sole, by contrast, is taxed at 12.5 percent. (Customers find that the fabric wears off within days, revealing the rubber sole beneath.)

A water-resistant jacket triggers a 7.1 percent tariff, while a jacket that has not been waterproofed gets hit with a 27.7 percent tariff. A jacket filled at least 10 percent, by weight, with down, brings about a tariff of only 4.4 percent.

Those distinctions don’t reflect national security or economic concerns — they are the result of long-past lobbying campaigns intended to protect or exempt certain manufacturers. Recognizing them, and designing around them, has become part of Columbia’s corporate culture since Mr. Tooze joined the company in 2001.

What Columbia is not doing, to any large degree, is bringing production jobs to the United States, as Mr. Trump would like.

Tim Boyle, Columbia’s chief executive, said in a recent interview that there was nothing the president could do to entice the company to make its products in the United States, where costs would be higher and apparel manufacturing expertise has withered through decades of outsourcing.

Peter J. Bragdon, Columbia’s general counsel, agreed with that assessment. “We’ve got huge tariffs on things already,” he said, adding that they have yet to bring manufacturing jobs back to the United States.

Columbia used to make all its products in Portland. But as it grew from a company with $1 million in annual sales to one with $2.5 billion, it turned to cheaper overseas labor to make its hats, mittens, winter jackets, hiking boots, camping pants and ski equipment.

Mr. Boyle said the firm emulated another Oregon retailer, Nike, adopting the approach that it should “design, market merchandise from a central location — America, Portland, whatever — and make it where you should make it in the world and sell it everywhere in the world.”

Today, just under 40 percent of Columbia’s business is outside the United States, and all of its products are made abroad. It sells heavily to Asia, Europe and Canada. It has a joint venture in China and is in the process of buying out its Chinese partner. Vietnam is its largest supplier. A quarter of its footwear comes from China.

At every turn in the supply chain, it is faced with tariffs.

To import the finished products to retail stores across the United States, Columbia must navigate the remnants of a 1930 trade bill, the Smoot-Hawley Tariff Act. That 1930 law raised tariffs rates in an effort to protect American businesses, only to end up being blamed by later economists as a key contributor to the Great Depression. Many of its measures have been scrapped, but some remain, particularly those affecting the clothing business.

In addition to imposing levies on foreign steel and aluminum, the Trump administration has placed tariffs on $250 billion worth of Chinese goods, while dangling the prospect of taxing all imports from China. Other countries have retaliated, including China, Europe, Canada and Mexico, taxing American-made products that flow into their countries, including apparel.

So far, Columbia has gone mostly unscathed, in part because Mr. Trump’s initial round of Chinese tariffs has largely avoided clothing. But the company has braced itself for the next wave, which would probably hit many of their imports, particularly Chinese-made footwear.

Columbia is preparing itself for every contingency. Among the questions the company is contemplating: Can it move products out of its factories and into stores quickly enough to beat any new tariffs before they go into effect? Can it change how it manufactures its goods — by, say, ramping up production in Vietnam and slowing it down in China?

“We’ve had probably two meetings a day on that, every day, for the last two months,” said Emily Vedaa, Columbia’s global trade manager. “How can we soften the blow?”

Mr. Trump has been unapologetic about his approach, arguing that any short-term economic pain will lead to long-term growth. He has also called out companies like Apple, telling them to move their production plants if they don’t like his plan.

“Make your products in the United States instead of China. Start building new plants now. Exciting!” Mr. Trump said in a tweet in September.

But companies like Columbia say they cannot adjust the way they do business on the fly to deal with policy changes, particularly when they are not settled. For instance, Mr. Trump has dangled the threat of additional tariffs on China while also saying a compromise could be reached. He plans to meet with President Xi Jinping of China for a high-stakes meeting at the G-20 in Buenos Aires later this month. And while the new tariffs are predicated on trade law, they have come about through executive, not congressional, action and could easily be undone by an administration that looks more kindly on global trade.

Thomas B. Cusick, Columbia’s chief operating officer, said the company has received its entire fall shipment already, as well as the “lion’s share” of merchandise for the Christmas season. In addition, it has bought all its products for next spring and reserved factory capacity for its fall 2019 line. Any changes it makes in response to moves out of Washington would not go into effect until 2020 — and that would mean large investments that the company would make only if they were certain to pay off in the long run.

Nearly every large American retailer is in a similar situation: 98 percent of the footwear bought by Americans is made overseas, and 97 percent of clothing sold in the United States is produced in other countries.

“This migration to Asia has been happening since the ’60s,” Mr. Boyle said. “And so everybody who made investments in machines to make fabric or extreme, you know, plastics to make nylon or any kind of textile products — all those investments have been in Asia. All the technology.”

Along with the factories, the manufacturing expertise has moved overseas.

“It’s one thing to design a shirt like you’re wearing,” Mr. Boyle said. “You can sketch that out on a piece of paper. But to make it fit somebody, that’s a technical expertise in tailoring that doesn’t exist here anymore. You could come up with some stuff that nobody could wear.”

Mr. Boyle conceded that if Mr. Trump does hit China with more tariffs, Columbia will have no choice but to charge more, despite the company’s long expertise in navigating trade winds.

“The prices will go up — we’re going to pass those along,” he said. “We have no other option.”

Jim Tankersley covers economic and tax policy. Over more than a decade covering politics and economics in Washington, he has written extensively about the stagnation of the American middle class and the decline of economic opportunity. @jimtankersley