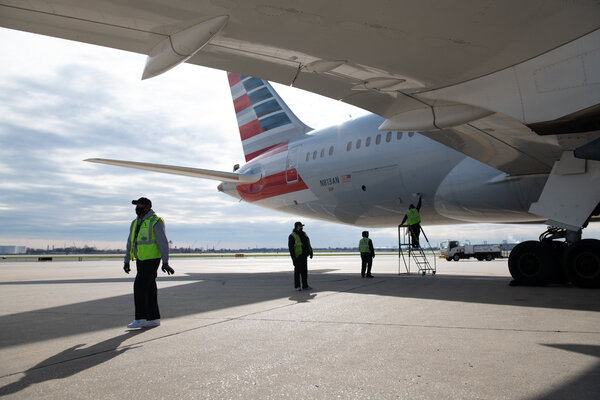 American Airlines’ share price jumped on Thursday as small investors who have roiled other stocks in recent days turned their attention to the struggling airline.

The company’s stock was up as much as 30 percent at one point before giving up most of those gains. American was trading at about $18, up around 10 percent, as of 11 a.m. The airline also reported financial results for 2020 on Thursday, saying it lost nearly $8.9 billion last year.

On the social media site Reddit, traders on the Wall Street Bets page, a community known for irreverent market discussions, have caused shares in other troubled companies, such as GameStop and AMC, to surge in recent days as they sought to take on some of Wall Street’s most sophisticated investors. In one post on Wednesday night, a Reddit user suggested American should be next because many professional investors had bet against its stock.

On a call with analysts and reporters on Thursday, American’s chief executive, Doug Parker, said the airline would not comment on the stock activity.

“Before I begin my prepared remarks, I want to pre-emptively state that we will not be commenting nor answering questions on the recent activity in our stock price,” Mr. Parker said. “As a rule, we don’t speculate on the day-to-day movements in our stock price and we’re going to stick to that rule today.”

The Reddit traders have focused on companies that are the focus of short sales, a maneuver investors use to bet that a company’s share price will fall.

If they are right, short sellers can reap handsome profits. But if the stock prices soar, they can run up huge losses. By driving up the price of stocks that have been heavily shorted, small investors coordinating on Reddit, Discord and other online platforms have squeezed professional investors and forced some to give up their short trades to cut their losses.