What can office desk salads tell us about the state of the pandemic?

To Sweetgreen, which has been selling $10 to $15 salads to lines of office workers for more than a decade, they say the end is in sight.

“Covid’s over,” Jonathan Neman, chief executive of Sweetgreen, said in a recent Zoom interview from Culver City, Calif., where the company is based, and where employees are being asked to return to the office on July 19. “At this point, it’s just getting people back in.”

Sweetgreen, which has 129 restaurants across more than a dozen states, is among the businesses that have been obsessively tracking coronavirus case numbers on sites like Axios and The New York Times throughout the pandemic. It has also been monitoring car traffic and OpenTable reservations to gauge consumer activity.

The company and its meals are connected to the status of office workers in cities, particularly millennials and those in Generation Z. Sweetgreen has raised more than $450 million in funding since it was founded in 2007 and has cultivated a loyal following thanks to its fresh ingredients, digital savvy and sharp branding, which extends to the design of its stores and celebrity partnerships with the likes of the tennis star Naomi Osaka. But it has also bet heavily on serving many white-collar workers in cities like New York and Los Angeles, a once-ubiquitous slice of urban life that was upended by the pandemic.

“It has definitely been challenging, especially in the cities that had a full shutdown,” Mr. Neman said.

Before the pandemic, he said, the company had set up more than 1,000 “outposts” — its name for salad pickup locations at places like corporate offices and hospitals. Sweetgreen now has about 250 up and running. 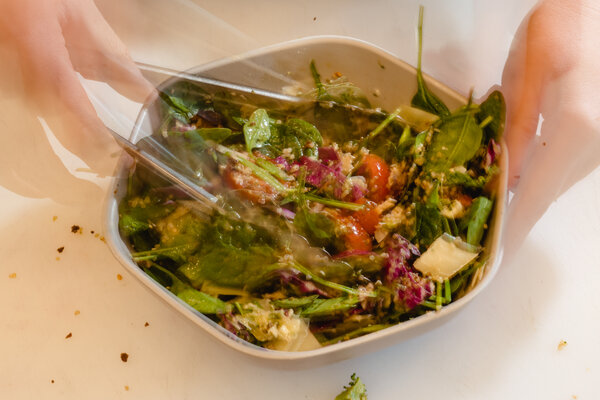 “We’re definitely not fully back from an office perspective,” Mr. Neman said, though he added that the company has experienced a steady rise in business since many mask mandates were dropped in May and the Memorial Day weekend.

“You’re starting to see these really nice increases as people are slowly returning to the office,” Mr. Neman said. He said that he planned to watch for a similar bump after July Fourth, though Labor Day “is going to be a very big moment.” Many companies have signaled that early September will be when they bring most workers back to the office, at least for part of the week.

With more than 30 locations in Manhattan and many customers who order salads digitally, Sweetgreen has had insight into the movements of its customers, even if they are not yet fully back to eating at their desks again.

The company has seen neighborhoods “start to really light up, like the Upper East Side and Upper West Side,” Mr. Neman said. “The true Midtown office has been the slowest to return, so we have a store in Rock Center, Bryant Park, those sorts of areas which have definitely been the slowest.”

Sweetgreen is also beginning to set up more restaurants outside of the city in areas like Westchester County and around Greenwich, Conn., as well as regions of New Jersey and Long Island. “There’s definitely some following customers in their dispersion,” Mr. Neman said. The company had been planning a suburban expansion before the pandemic, but it has accelerated those initiatives.

Although Sweetgreen said it had been insulated from some of the shocks of the past year because of its online ordering capabilities and its robust delivery service, the future of work matters for its business. The company was recently valued at $1.78 billion and, according to a report by Axios, it has confidentially filed for an initial public offering. Sweetgreen does not share its financials but has said its revenue exceeded $300 million in 2019.

Third-party research firms have found that the company is still recovering from the past year. In the New York metro market, transactions at Sweetgreen were down 20 percent in May 2021 relative to 2019, according to Earnest Research, a data analytics company that monitors millions of debit and credit card payments made in the United States.

“As higher-vaccinated markets continue to drag, the impact of the lunch crowd heading back to the office will likely be a key factor on this I.P.O., especially with fewer folks returning from the urban exodus,” said Zach Amsel, a senior data analytics director at Earnest Research.

Mr. Neman is expecting companies to go back to in-office work for three to four days per week, especially after Labor Day.

“The office is not dead — I do think that sitting behind a screen all day created burnout,” he said. “I land a little bit more in a moderate world, where the world’s probably not going 100 percent back to where it was, but I also don’t think the world is going full-on work from home.”

As for Sweetgreen’s return to office plan this month, the company said that it had been encouraging vaccinations but it will not mandate them for employees. The topic has been fraught, with companies like Saks and BlackRock requiring vaccines for employees who are returning in person and others hesitating to establish those guidelines.

“These decisions get so loaded these days,” Mr. Neman said. “We are trying to find the balance between creating this place that everyone feels safe but also not overstepping in terms of pure personal decisions.”