WASHINGTON — President Biden will seek new taxes on the rich, including a near doubling of the capital gains tax for people earning more than $1 million a year, to pay for the next phase in his $4 trillion plan to reshape the American economy.

Mr. Biden will also propose raising the top marginal income tax rate to 39.6 percent from 37 percent, the level it was cut to by President Donald J. Trump’s tax overhaul in 2017. The proposals are in line with Mr. Biden’s campaign promises to raise taxes on the wealthy but not on households earning less than $400,000.

The president will lay out the full proposal, which he calls the American Family Plan, next week. It will include about $1.5 trillion in new spending and tax credits meant to fight poverty, reduce child care costs for families, make prekindergarten and community college free to all, and establish a national paid leave program, according to people familiar with the proposal. It is not yet final and could change before next week.

The plan will not include an up to $700 billion effort to expand health coverage or reduce government spending on prescription drugs. Officials have decided to instead pursue health care as a separate initiative, a move that sidesteps a fight among liberals on Capitol Hill but that risks upsetting some progressive groups.

News of the tax provisions appeared to unnerve investors on Thursday, with stock markets giving up gains as investors absorbed details of Mr. Biden’s capital gains tax plans. The S&P 500 closed down 0.92 percent.

The plan will set up a clash with Republicans and test how far Democrats in Congress want to go to rebalance an economy that has disproportionately benefited high-income Americans.

Mr. Biden’s advisers are eyeing a wide range of possibilities for how to move the president’s economic agenda through Congress. They are holding out hope of reaching bipartisan agreement on at least some provisions, while preparing to bypass a Republican filibuster and pass much of the tax and spending agenda on a party-line vote using the parliamentary process known as budget reconciliation.

The president has broken his economic plan into two parts. The first centers on physical infrastructure, like bridges and airports, along with other provisions such as home care for older and disabled Americans. The second part, details of which emerged on Thursday, focuses on what administration officials call “human infrastructure” — helping Americans gain skills and the flexibility to contribute more at work.

The challenges for Mr. Biden are apparent. The administration has already disappointed key Democrats, including Speaker Nancy Pelosi of California. “Lowering health costs and prescription drug prices will be a top priority for House Democrats to be included” in the plan, she said.

Republicans have shown some willingness to negotiate with Mr. Biden on the first part of his agenda, including spending on roads, waterways and broadband internet. But they have vowed to fight his tax plans, and they have shown little interest in the spending provisions contained in his latest proposal.

That contrasts with the president’s $2.3 trillion American Jobs Plan, which Mr. Biden outlined last month. Republicans cast Mr. Biden’s proposed increases as an attack on their party’s signature economic achievement under Mr. Trump, a sweeping collection of tax cuts passed at the end of 2017.

Lawmakers should work together to improve the nation’s infrastructure “without damaging the tax reform that gave us the best economy of my lifetime,” said Senator Patrick J. Toomey of Pennsylvania, the top Republican on the banking committee.

The president’s latest proposals call for hundreds of billions of dollars for universal prekindergarten, expanded subsidies for child care, a national paid leave program for workers and free community college tuition for all. 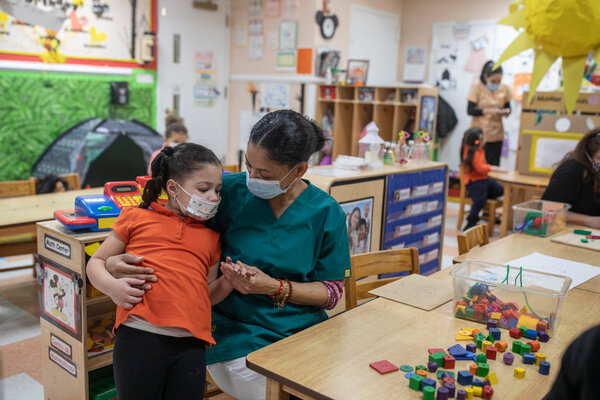 The plan also seeks to extend through 2025 an expanded tax credit for parents — which is essentially a monthly payment for most families — that Mr. Biden signed into law last month.

Democrats on Capitol Hill have urged Mr. Biden to make that credit permanent. Analysts say the credit would drastically cut child poverty this year. Those pushing Mr. Biden include Senators Michael Bennet of Colorado, Cory Booker of New Jersey and Sherrod Brown of Ohio, along with Representatives Rosa DeLauro of Connecticut, Suzan DelBene of Washington and Ritchie Torres of New York.

“Expansion of the child tax credit is the most significant policy to come out of Washington in generations, and Congress has an historic opportunity to provide a lifeline to the middle class and to cut child poverty in half on a permanent basis,” the lawmakers said this week in a joint statement. “No recovery will be complete unless our tax code provides a sustained pathway to economic prosperity for working families and children.”

Mr. Biden also wants to incorporate some type of extension for an expanded earned-income tax credit, which was included in the earlier aid package on a one-year basis.

The plan’s spending and tax credits will total around $1.5 trillion, according to administration estimates, in keeping with early versions of the two-step agenda first reported last month by The New York Times.

To offset that cost, Mr. Biden will propose several tax increases he included in his campaign platform. That starts with raising the top marginal income tax and the tax on capital gains — the proceeds of selling an asset like a stock or a boat — for people earning more than $1 million. The plan would effectively increase the rate they pay on that income to 39.6 percent from 20 percent.

Capital gains income would also still be subject to a 3.8 percent surtax that helps fund the Affordable Care Act. It was unclear if the tax increase would also apply to income earned from dividends.

The president will also propose eliminating a provision of the tax code that reduces taxes for wealthy heirs when they sell assets they inherit, like art or property, that have gained value over time. And he would raise revenue by increasing enforcement at the Internal Revenue Service to bring in more money from wealthy Americans who evade taxes.

Administration officials this week were debating other possible tax increases that could be included in the plan, like capping deductions for wealthy taxpayers or increasing the estate tax on wealthy heirs.

Previous versions of Mr. Biden’s plan, circulated inside the White House, called for raising revenues by enacting measures to reduce the cost of prescription drugs bought using government health care programs. That money would have funded a continued expansion of health coverage subsidies for insurance bought through the Affordable Care Act, which were also temporarily expanded by the economic aid bill this year.

Mr. Biden’s team was under pressure from Senator Bernie Sanders, independent of Vermont and the chairman of the Budget Committee, to instead focus his health care efforts on a plan to expand Medicare. Mr. Sanders has pushed the administration to lower Medicare’s eligibility age and expand it to cover vision, dental and hearing services.