The owner of Cadbury has announced plans to cut the sizes of products in its chocolate bar multi-packs – but not reflect the downsizing in its prices.

Mondelez, which aims to introduce the change from next year, wants to keep popular products within multi-packs including Wispa, Twirl and Crunchie, below 200 calories each.

But the company told Sky News it was up to individual retailers how they charged customers as it had no plans to reduce its own list prices.

It said the shift was part of anti-obesity efforts to ensure “portion control”.

The company also confirmed bars and other products sold individually would not be affected to maintain choice.

A consumer group responded by saying customers would feel “frustrated” by the multi-pack change at a time of pressure on incomes from the coronavirus crisis, branding it a clear example of so-called ‘shrinkflation’ when consumers essentially get less bang for their buck – paying the same amount for less.

The move builds on earlier recipe shifts and a previous announcement that biscuits and other chocolate products typically bought for children would come in at under 100 calories each by the end of this year. 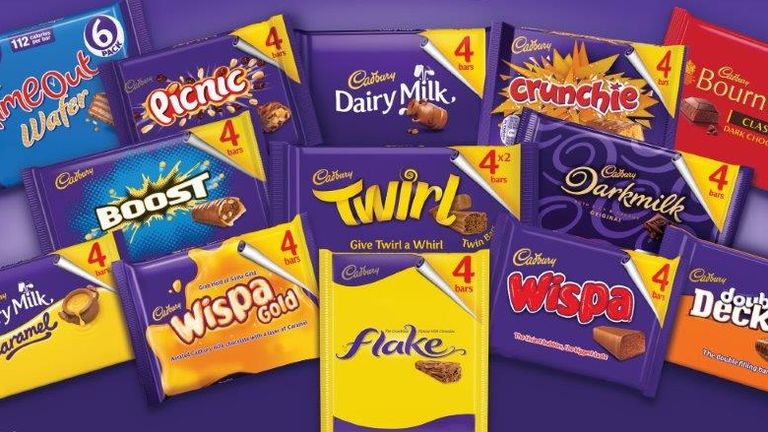 Louise Stigant, UK Managing Director at Mondelez International, said there was a “strong sense of duty” to protect the Cadbury brand.

She added: “We also recognise we must play our part in tackling obesity and are committed to doing so without compromising on consumer choice.

“That is why we have been focusing on the areas we know will make the greatest impact and have been backed up by consumer research and nutritional science.”

Adam French, the consumer rights expert at Which?, said: “It’s good that Cadbury is being upfront about this change and laudable that Mondelez wants to help to tackle the obesity crisis – but some customers will rightly wonder why the prices of these products aren’t coming down along with the size.

“In recent years, we’ve repeatedly seen this trend of popular products shrinking while the prices stay the same, and it is understandable that households, many of them facing a squeeze on their finances, feel frustrated by it.”