It is a rescue for Thomas Cook’s network of high street stores, though will not save the 178-year-old brand name.

But have John and Irene Hays, the husband and wife team whose company is buying the 555 shops, bitten off more than they can chew?

Mr Hays founded his business selling Butlins holidays out of the back of his mother’s shop in 1980.

But its purchase of the Thomas Cook network for an undisclosed sum represents a huge expansion for a company that is also much less well known than its failed larger rival.

And it comes at a time when the way consumers buy holidays has been changing – with many choosing to book online rather than having the hassle of a trip to the shops.

The background to Thomas Cook’s collapse suggests it is a daunting task.

The seeds of the demise were sown more than a decade ago when Thomas Cook itself embarked on a major expansion, swallowing up package holiday firm MyTravel and later buying the Co-op’s network of high street travel agents.

That legacy left it saddled with debts of £1.6bn and, for all management’s efforts to refocus the business, unable to survive an increasingly tough trading environment – with demand hit by factors ranging from political uncertainty to last year’s heatwave summer.

The acquisition of the stores by Hays has the benefit of not being funded by debt.

Julie Palmer, partner at restructuring specialists Begbies Traynor, thinks that in many ways it looks like a “savvy deal” for Hays, picking up the shops for a good price from liquidators and leaving the new owners in a position to renegotiate rents with landlords.

But she said there were question marks over the logic behind it.

“You have to wonder what Hays’ plan is and how they make it a success,” she said.

“Has the travel firm been gung-ho in trying to secure a cheap deal without assessing the viability of taking on these stores?”

Thomas Cook’s most recent annual results, covering the year to the end of September 2018, showed the UK tour operator division of its business grew revenues to just under £2bn.

But the division turned loss-making in what was an increasingly competitive market for last minute summer deals – and over the period it closed 100 underperforming stores.

Prior to its collapse, Thomas Cook was being lined up for a complex rescue involving Chinese conglomerate Fosun which would have separated the tour operator side of the business from its more profitable airline – a deal that in the end did not make it over the line.

Its liquidation was surrounded in controversy over the millions in salary and bonuses paid to the company’s bosses over the years.

The new owner of Thomas Cook’s stores looks like a very different prospect. 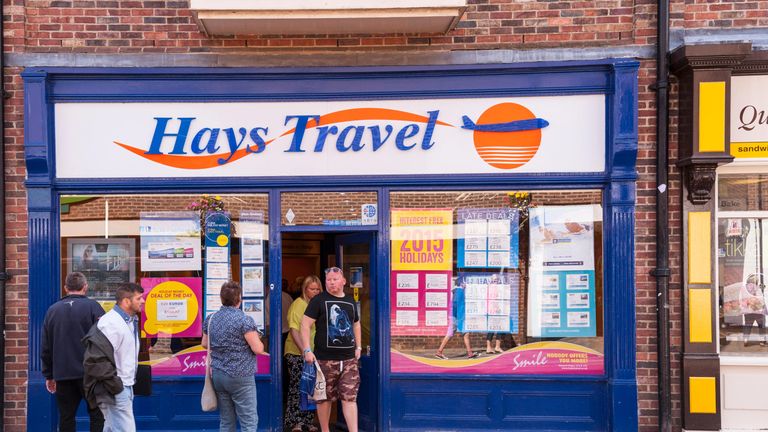 Founded in Seaham, County Durham, Hays Travel boasts of having grown sales from £812 in its first year of business to more than £1bn last year.

Now based in Sunderland, Irene Hays notes that it does not have a “grandiose head office in the City” and that she and her husband “don’t pay ourselves a lot of money”.

While acknowledging doubts over the deal and the sector as a whole, she thinks the expansion will be a success.

A previous enlargement six years ago saw Hays double in size with the purchase of the more upmarket southern-based Bath Travel.

Mr and Mrs Hays recall that it was described in the trade press as the equivalent of Greggs buying Patisserie Valerie – a comparison not intended as a compliment but evidently a badge of pride for them.

It is an anecdote that suggests a confidence in a further and much bigger expansion.

The couple acknowledge “some issues” about the business they are now buying, having looked through its accounts.

They say they will “have a look” at the stores but there are no plans to close any.

“We are asked about the death of the high street a lot – we have been asked for many years,” Mrs Hays told reporters on a call after the deal was announced.

“But we think we do something different to other people.”