In a rambling conversation, Mr. Van Winkle praised the poses of the 1990s band Bell Biv DeVoe and demurred when asked about his relationship with Madonna. He dispensed advice on real estate and life, saying, “You got to protect your happiness to protect your life.” At one point, an attendee serenaded the gathering with an a cappella version of his hit “Ice Ice Baby.”

Several hours later, Mr. Van Winkle confessed that he needed to leave before the mother of his child got angry.

It was the kind of freewheeling and unpredictable event that has been happening around the clock on Clubhouse, an 11-month-old social media app that has exploded in popularity with the tastemakers of tech and popular culture and that is quickly becoming a town square for debates over free speech and politics. 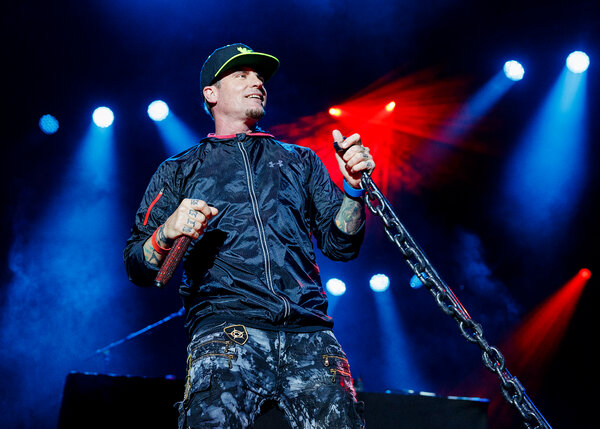 The app, which lets people gather in audio chatrooms to discuss different topics, has been downloaded nearly four million times in the last month alone, according to Apptopia. Public figures as various as Elon Musk, Ai Weiwei, Lindsay Lohan and Roger Stone have joined it, and the unconstrained conversations it has enabled have incurred the wrath of China, which banned Clubhouse last week.

In the process, Clubhouse has generated debate about whether audio is the next wave of social media, moving digital connections beyond text, photos and videos to old-fashioned voice. In thousands of chatrooms every day, Clubhouse’s users have conducted unfettered conversations on subjects as varied as astrophysics, geopolitics, queer representation in Bollywood and even cosmic poetry.

“This is a major change in how the social internet works,” said Dave Morin, who founded the social network Path more than a decade ago and has invested in Clubhouse. “I believe it’s a new chapter.”

Clubhouse’s trajectory has been rapid — it had just a few thousand users in May — even though the app is invitation-only and not widely available. The invitations are so coveted that they have been listed on eBay for as much as $89. Media companies such as Barstool Sports have also set up Clubhouse accounts, and at least one firm has said it plans to hire a “senior Clubhouse executive.”

The attention has overwhelmed the tiny San Francisco start-up, which has around a dozen employees and was founded by two entrepreneurs, Paul Davison and Rohan Seth. While Clubhouse raised more than $100 million in funding last month and was valued at $1 billion, it has struggled to handle the surging traffic. On Wednesday, the app crashed. Also, Facebook and Twitter are working on similar products to compete with it.

Clubhouse is also contending with rising complaints about harassment, misinformation and privacy. In one incident last month, a user promoted conspiracy theories about the coronavirus vaccines and discouraged people from getting the shots, leading to harassment of a female doctor.

This month, German and Italian regulators publicly questioned whether Clubhouse’s data practices complied with European data protection laws. And China blocked the app after political conversations popped up on it outside the country’s tight internet controls.

Clubhouse is following a classic Silicon Valley start-up path that social media companies like Twitter, Snapchat and Facebook have also trod: viral growth followed by the messy issues that come with it. It is the first American social media company to break out in years. The last global social networking hit was TikTok, a Chinese-owned app that catapulted 15-second videos into the cultural discourse.

Mr. Davison, 40, and Mr. Seth, 36, declined to be interviewed. In a Clubhouse discussion on Sunday, Mr. Davison said the company was rushing to hire, build new features and release an Android version of the app.

“It’s just been crazy, we’ve had so many people joining,” he said.

Mr. Davison and Mr. Seth, who both attended Stanford University, are repeat entrepreneurs. Mr. Davison created several social networking apps, including Highlight, which allowed users to see and message people nearby. Mr. Seth was a Google engineer and co-founded a company, Memry Labs, which built apps. Those start-ups were either bought or shut down.

In 2019, the two men — who had met through tech circles in 2011 — built a prototype podcasting app, Talkshow, which they called their “one last try.” But Talkshow felt too much like a formal broadcast, so they decided to add a way for people to spontaneously join the conversation, Mr. Davison said in an interview with the “Hello Monday” podcast last month.

Last March, Mr. Davison and Mr. Seth started Clubhouse. They added a way for multiple speakers to broadcast at once and allowed people to bounce between digital rooms as if they were going from stage to stage at a music festival or business conference. To avoid overwhelming their start-up, they doled out invitations slowly.

The app caught on as people sought new ways to connect with one another in the pandemic. Some of its earliest users were Silicon Valley venture capitalists such as Marc Andreessen and his business partner Ben Horowitz, who introduced Clubhouse to their networks. Oprah Winfrey, MC Hammer and John Mayer joined.

“There’s this feeling of access that’s really hard to replicate,” said Andy Annacone, an investor at TechNexus Venture Collaborative, which operates a fund that invested in Clubhouse.

In May, Mr. Andreessen and Mr. Horowitz’s venture firm, Andreessen Horowitz, put $10 million into Clubhouse, valuing it at $100 million. It had two employees at the time.

TikTok influencers, YouTube stars and cast members of “The Bachelor” soon became active on the app. It also spawned its own stars, with some people on its “suggested user list” amassing more than one million followers. In December, Clubhouse unveiled an invitation-only “creator pilot program” to help so-called power users make money on the app.

“People are already building brands,” said Sheel Mohnot, 38, founder of Better Tomorrow Ventures, who has 1.2 million followers on the app. “There’s all these Clubhouse shows. Some of those shows I’ve seen are sponsored.” (Mr. Davison and Mr. Seth have said the company plans to make money through ticketed events, subscriptions and tipping, but will not sell ads.)

The growth has been accompanied by criticism that women and people of color are frequent targets of abuse and that discussions involving anti-Semitism, homophobia, racism and misogyny are on the rise.

Porsha Belle, 32, a Clubhouse influencer in Houston, said that after she spoke up about misogyny on the app, people formed rooms to encourage one another to report her account so she would be barred. Her account was suspended last Monday.

She said she had tried appealing to the company, but found little recourse. “My page is suspended while the bullies get to roam free,” she said.

Rachelle Dooley, 40, a social media manager in Austin, Texas, who is deaf, said she had been blocked and kicked out of some Clubhouse rooms.

“I can see it show up on the closed caption, people saying, ‘Why is this deaf lady on an audio app?’” she said. “I’d freeze and start crying.”

Clubhouse has a “blocking” feature to give users more control over their spaces. That has in turn sometimes created disputes about access, including with a New York Times journalist.

Kimberly Ellis, 48, an American and Africana studies scholar at Carnegie Mellon University who leads workshops on digital safety, said she had also been in Clubhouse rooms where people appeared to dispense financial advice but were instead “doing multilevel marketing.”

“Some want to coach you and get money from you for their courses,” she said.

In Sunday’s Clubhouse discussion, Mr. Davison said the company has explicit rules against spreading misinformation, hate speech, abuse and bullying. The start-up said last year that it was adding advisers and safety features and empowering moderators.

Yet Clubhouse has also enabled people living under strict censorship in countries such as China and Turkey to speak freely about many topics. Some users said they were hooked.

Brielle Riche, 33, a brand strategist in Los Angeles, said Clubhouse had opened up her world since she started using it in November.

“Clubhouse gives us the opportunity to connect with strangers,” she said. “Only Clubhouse can get you off TikTok.”

A week after Clubhouse announced its newest funding last month, Mr. Musk set off a frenzy when he appeared on the app and interviewed Vlad Tenev, the chief executive of the stock trading app Robinhood. Mr. Musk has promised to return to Clubhouse with Kanye West and has invited President Vladimir V. Putin of Russia to the app.

A few days later, Mark Zuckerberg, Facebook’s chief executive, turned up to chat about virtual and augmented reality. Then China banned the app.

On Sunday, 5,000 people — the maximum in a Clubhouse room — attended a weekly “town hall” session with the founders. Mr. Davison joined late because he had been in another room welcoming Senator Tim Kaine, Democrat of Virginia, to the app.