David Newhouse, who as the editor guided The Patriot-News in Harrisburg, Pa., to a Pulitzer Prize for breaking the story that led to the conviction of the Penn State assistant football coach Jerry Sandusky for sexually abusing young boys, and to the firing of Joe Paterno, the school’s once-beloved head football coach, died on Wednesday at a hospital in Hanover, N.H. He was 65.

The cause was complications of leukemia, his brother Mark said.

Mr. Newhouse, a member of the powerful publishing family whose best-known media holding is its Condé Nast magazine division, led a modest central Pennsylvania outpost in the Newhouse empire.

But his small city daily gained national attention in March 2011 when a staff writer, Sara Ganim, reported that Mr. Sandusky was being investigated by a grand jury for allegations that he had “indecently assaulted a teenage boy.” The scandal mushroomed that November, when Mr. Sandusky was indicted on charges of sexually abusing eight boys over a 15-year period.

That first article and nine others were cited by the Pulitzer board in 2012 for “courageously revealing and adeptly covering the explosive Penn State sex scandal.”

Ms. Ganim said that Mr. Newhouse had encouraged her from the start to pursue the story, even as she covered the police beat in Harrisburg, about 90 minutes from Penn State’s campus.

“He was very good,” she said, “at saying, ‘OK, everyone from all the news organizations will be at the press conference, but what you should be doing is thinking of how to move the story forward.’”

Mr. Sandusky was ultimately convicted on 45 counts of assaulting 10 boys. Mr. Paterno, who was accused of doing too little to stop Mr. Sandusky from preying on boys, was fired. And Penn State’s image and reputation were badly tarnished.

Cate Barron, who succeeded Mr. Newhouse as editor in 2012, said he had reminded the reporting team to keep its focus on Mr. Sandusky’s victims, the men who had been raped as boys.

“It was a criminal story, about victims,” she said. “He was the beacon on that.”

During his 11 years at The Patriot-News, David Newhouse was drawn to journalism “that gave voice to the voiceless,” Ms. Barron said, like articles by the investigative reporter Peter Shellem that led to the release of five wrongly convicted prisoners.

“That whole speaking truth to power, he believed it in his soul,” she said.

In November 2011, Mr. Newhouse wrote a column for his newspaper that criticized The New York Times for its handling of an article about one of Mr. Sandusky’s victims. To protect his identity, the individual was referred to as Victim 1 in The Times, as he was in the indictment. But Mr. Newhouse said the article “was so detailed that, even though they do not name him, Googling certain information in the profile results in the young man’s name within seconds.”

Editors at The Times defended the article, but Arthur S. Brisbane, The Times’s public editor at the time, disagreed. Though he acknowledged that certain details about Victim 1 gave readers “a deeper understanding of the boy,” he asked: “Was that reason enough to include them and put his privacy at risk? I don’t believe so.”

About a month after the Pulitzer was awarded, Mr. Newhouse left The Patriot-News to become the editor at large of the family-owned Advance Local, helping to develop websites as the family’s newspapers evolved into digital operations. 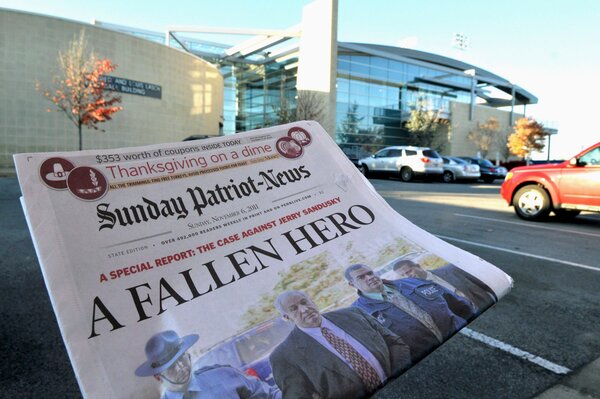 David Anthony Newhouse was born on Sept. 29, 1955, in Manhattan and grew up in Great Neck, on Long Island, and in New Orleans. His father, Norman, was the editor of the Queens-based Long Island Press and later oversaw The Times-Picayune in New Orleans and other Southern papers owned by his family. Norman was a brother of Samuel I. Newhouse, who started the family in the publishing business. David’s mother, Alice (Gross) Newhouse, was a homemaker.

“We all idolized our father,” Mark Newhouse, the executive vice president of newspapers for his family’s Advance Publications, said in a phone interview. “We grew up thinking that being a newspaperman was the best thing you could aspire to be.”

David Newhouse originally took a different path, however. He graduated from Cornell University with a bachelor’s degree in theater in 1977 and earned a master’s in film production from Boston University in 1980 and a second master’s, in education, from Tufts University three years later

He owned a bookstore in Harvard Square in Cambridge, Mass., and a children’s clothing store in Arlington, Mass. He also taught English at Newton North High School in Newton, Mass., before asking his family to find him a job at one of its newspapers.

He started at The Times of Trenton, N.J., in 1993 as a municipal reporter and rose to business editor and assistant managing editor before becoming executive editor of The Patriot-News in 2001. He was promoted to editor in 2010.

He was a strong voice on the newspaper’s editorial board; after Mr. Sandusky was indicted, Mr. Newhouse argued strongly for the resignations of Mr. Paterno and Graham Spanier, Penn State’s president, for doing too little to stop Mr. Sandusky. The editorial took up the entire front page.

In addition to his brother Mark, Mr. Newhouse is survived by his wife, Alice Stewart; his daughters, Lily, Hope and Magdalena Newhouse, and Macrina Ringling; two other brothers, Peter and Jonathan; a sister, Robyn Newhouse; and three grandchildren. His marriage to Katherine Call ended in divorce.