WASHINGTON — McDonald’s, Chipotle and Amazon are all raising pay as companies try to fill jobs faster than they can find workers. Airplane tickets and hotel rooms are becoming more expensive as demand rebounds thanks to newly widespread vaccinations. Supply shortages are making it tougher to buy a house or a new car.

Republicans look at the economy and see a political liability for the Biden administration. Inflation is taking off, they warn, and worker shortages are threatening the viability of long-suffering small businesses.

President Biden and his advisers assess the same set of conditions and reach a vastly different conclusion. The dislocations that are causing prices to rise quickly are likely to be temporary, they say. And while both the speed of the economic snapback and the power it has conferred on workers have come as something of a surprise, White House economic officials see a lot to like in the evolving trends.

That disconnect in views could shift as the reopening proceeds and it becomes clearer how the economy is doing. But the disagreement is already helping shape the political debate over Mr. Biden’s infrastructure and jobs proposals, which would inject another $4 trillion into the economy, offset by tax increases on corporations and high earners.

Four months into Mr. Biden’s term, Republicans say his economic agenda is already failing the country. The president’s team says the state of the economy shows how he can deliver for workers.

“It is good policy and good for everyone to increase those wages a little,” Anita Dunn, a senior adviser to Mr. Biden, said in an interview. “You see some very large employers already starting to do that, and that’s good for the country. And that is certainly in line with what President Biden believes, which is that working Americans, middle-class Americans who haven’t been the beneficiaries of trickle-down economics for the last 40 years, deserve a raise.”

The Federal Reserve likewise sees its policies — rock-bottom interest rates and monthly purchases of government-backed debt that are fueling lending and spending — as helping heal the labor market and the overall economy. Its top officials have maintained that the period of higher inflation expected this year will be temporary. And while policymakers have been surprised by some recent data points, they emphasize that is to be expected: After all, nobody has reopened the economy from a pandemic before.

Critics, including some liberal economists, look at the confidence coming from the White House and the Fed and see a risk: that policymakers will be too slow to change course in the face of a fast-changing backdrop. If companies continue to struggle to find workers and prices shoot even higher, they warn, the economy could overheat, hurting businesses and consumers and maybe even leading to another recession.

Republicans are faulting the White House for not ending a more generous unemployment benefit that they say is keeping workers on the sidelines, citing anecdotes from business leaders around the country. At least 21 Republican-led states have already announced they will cease offering the $300 supplement.

“We should be on track for a fantastic American comeback summer, full steam ahead,” Senator Mitch McConnell of Kentucky, the Republican leader, said this month on the chamber floor. “From vaccinations to job growth, the new Biden administration inherited favorable trends in every direction.”

“But in several important ways, the decisions of elected Democrats have contributed to slowing the return to normalcy,” he added.

Critics have also questioned the wisdom of the Fed’s commitment to keeping interest rates low and buying bonds even as prices begin to rise. Senator Patrick J. Toomey, Republican of Pennsylvania, said last month that while the Fed “maintains that this bout of inflation will be mild and temporary,” it “may be time for the central bank to consider the alternative.”

Mr. Biden’s aides say they continue to monitor the threat that consumer prices could spiral upward, forcing a rapid policy response that could slam the brakes on economic growth. They say that those risks remain low, and that they see no reason to change course on the president’s agenda, including proposed infrastructure and social programs that the president asserts will bolster the economy for years to come. That agenda could prove a more difficult sell, even among congressional Democrats, if job growth continues to disappoint and inflation soars higher than expected.

Fed officials also remain undaunted. They show no sign of raising interest rates soon and are continuing to buy $120 billion in government-backed bonds each month. Officials have given only the earliest hints that they might begin to tiptoe away from that emergency policy setting. They argue that their job is to manage risks, and the risk of withdrawing help early is bigger than the risk that the economy will overheat.

“I don’t think it would be good for the industries we want to see thriving as the recovery continues for us to close off that recovery prematurely,” Randal K. Quarles, the Fed’s vice chair for supervision, said at a House committee hearing this week as lawmakers pressed him on the threat of inflation. The Fed is independent of the White House, but responsible for keeping prices in check.

Voters give Mr. Biden high marks for his economic stewardship thus far. A solid majority of Americans — including many Republicans — approve of the president’s plans to raise taxes on high earners and corporations to fund new spending on water pipes, electric vehicles, education, child care assistance, paid leave and other programs, according to polling for The New York Times conducted by the online research firm Survey Monkey from May 3 to 9.

But recent financial data has created an uncomfortable moment for the White House — and the Fed — and sharpened the political and economic risks if Mr. Biden’s advisers are proved wrong. 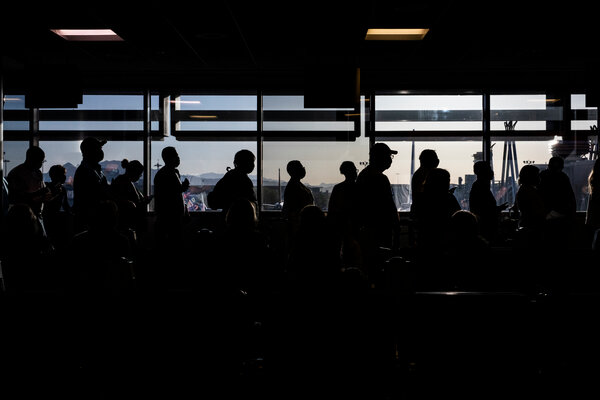 The Consumer Price Index surprised economists by rocketing 4.2 percent in April from a year earlier as technical data quirks, supply bottlenecks and resurgent demand combined to push the data point far above the 3.6 percent gain that analysts had expected. Airfares and hotel rates jumped as demand for travel rebounds, for instance, and used car prices picked up sharply as shortages of semiconductors and other parts limit new vehicle production.

Businesses added 266,000 net jobs in April, far short of the one million economists had predicted. That came as hiring slowed across many sectors and the number of jobs in employment categories including couriers, temporary help workers and grocery store employees actually declined.

Administration officials have stressed caution, and patience, in interpreting those numbers. They say the economy is in for an uncertain and likely uneven stretch of growth, while pointing to the continued drop in new jobless claims as evidence the recovery is continuing apace.

Many consumers are suddenly more flush with cash, thanks to savings built up during the pandemic and direct checks of up to $1,400 sent to most Americans as part of the economic aid bill in March. That money is helping fuel demand in hard-hit sectors, especially travel and hospitality. But the younger workers who often populate those industries were among the last to be eligible for vaccines, the officials stress, and many more are feeling cautious about when and how to return to work.

“We put the economy in a medically induced coma, and you don’t come out of a coma and run a marathon the next day,” Cecilia Rouse, who leads the White House’s Council of Economic Advisers, said in an interview. “We don’t just flip the switch and the economy comes back. And I would say that even more so for workers, where for a year we have said, ‘Do not venture out, there is a virus out there that could kill you.’”

Reasons for the slowdown remain a matter of dispute. Companies surveyed by the Fed have cited various reasons for the worker shortage, including health concerns, early retirements, child care responsibilities and the increased unemployment benefits.

Republicans are increasingly demanding the White House move to scrap its additional $300-per-week benefit for the unemployed, which is scheduled to end in September. “It creates an additional disincentive to go to work,” Senator Rob Portman, Republican of Ohio, said this week on the chamber floor.

White House officials disagree, based on their own analysis of employment data. They say vaccination rates and other concerns for workers, like child care availability, are very likely playing a bigger role than the unemployment benefit.

A new working paper from the Federal Reserve Bank of San Francisco suggests that the current $300 benefit might be keeping some workers from accepting jobs that they otherwise might — though the disincentive is not especially large.

The authors, drawing on their past research into the effect of a more generous $600 supplemental benefit last year, estimate that about seven of every 28 unemployed people received job offers they would normally accept in each month of early 2021, averaging across January to April. Of those seven, one declined the job because of unemployment insurance, wrote Nicolas Petrosky-Nadeau and Robert G. Valletta, who noted that the figures were imprecise, since both the benefits and the labor market have changed since last year.

White House officials acknowledge that the extra jobless benefit could be helping workers demand more money from employers, which effectively means that they are unwilling to take jobs that they would have otherwise accepted. Mr. Biden stressed this month that unemployed Americans should lose their benefits if they turn down a job offer from a workplace safe from the pandemic.

Still, the administration is welcoming what appears to be at least a brief surge of worker bargaining power.

Many large companies have announced plans to raise pay as they try to lure workers, and some are offering other benefits or one-time bonuses to draw applicants in. Bank of America and Tyson Foods have announced that they are increasing minimum pay rates or have talked about paying more during recent public events.

“We want to have economic growth where the benefits of that growth are more broadly shared,” Brian Deese, who leads Mr. Biden’s National Economic Council, said in an interview. “That should come as no surprise.”