If you liked Wonder Woman and Moana in part because they were films led by strong female characters, then it looks like you weren’t alone.

Conventional wisdom in Hollywood is that male stars are a bigger box office draw, often the reason given for their higher salaries.

But that may have been a miscalculation according to new analysis, showing films with female leads earn more.

The correlation was true irrespective of how big the production budget was: films where female stars had top billing, made more money than those with male stars. 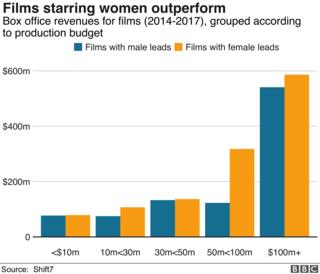 The period included the animation Trolls, with the lead character voiced by Anna Kendrick, Beauty and the Beast, starring Emma Watson, as well as Captain America: Civil War starring Chris Evans, and two films from the Star Wars series.

The research on behalf of the Creative Artists Agency (CAA) and innovation consultancy shift7, divided the films into five different categories based on how much they cost to make, starting with those that were made on a budget less than $10m (£8m) and up to those made for $100m or more.

They then looked at whether the top-listed performer was male or female. At every budget level, films with female leads performed better in worldwide box office averages.

They also found films which passed the Bechdel test, which looks at whether women are given roles other than those revolving around romantic liaisons with men, outperformed those that failed it.

“This is powerful proof that audiences want to see everyone represented on screen,” said Amy Pascal, head of Pascal Pictures and former chairman of Sony Pictures, who leads a working group of prominent women in the film industry. “Decision-makers in Hollywood need to pay attention to this.”

CAA and shift7 came together as a result of the TimesUp movement that called for a change in gender relationships in the film industry.

The Bechdel test was developed as a rule of thumb for whether women are being portrayed as rounded human beings in films and in order to pass the film must contain at least one scene where women talk to each other about something other than a man.

The last movie to make more than $1bn that did not pass the Bechdel test was The Hobbit: An Unexpected Journey in 2012.

“The Bechdel Test is a low bar to clear, and it’s surprising how many movies don’t clear it,” said another of the group’s members, Founder of 3dot Productions Liza Chasin. “Understandably, the studios think about the bottom line, so it’s great to see a growing body of data that should make it easier for executives to make more inclusive decisions.”

The backers of the research said they hoped the message would get through that it was important to represent women in more diverse roles so that in future they will aspire to a broader range of roles in the economy, including in science, technology, engineering and maths.

“What we see on screen affects how we see ourselves and each other,” said chief executive of shift7 Megan Smith.

“When people who have been traditionally under-represented are stereotyped, or left out of the story entirely, we diminish confidence and deprive people of role models and directly hold back the country’s economic and social potential.”

Actor Geena Davis, who starred in the 1991 film Thelma and Louise, and who now produces films as well as acting said: “I started commissioning data back in 2004, realizing there is so much unconscious bias in this space. The truth is that seeing women and girls on screen is not only good for everyone – especially our children – it’s also good entertainment and good business.”