The pandemic has upended the circuit, meaning smaller movies face an even greater challenge in attracting deep-pocketed distributors. 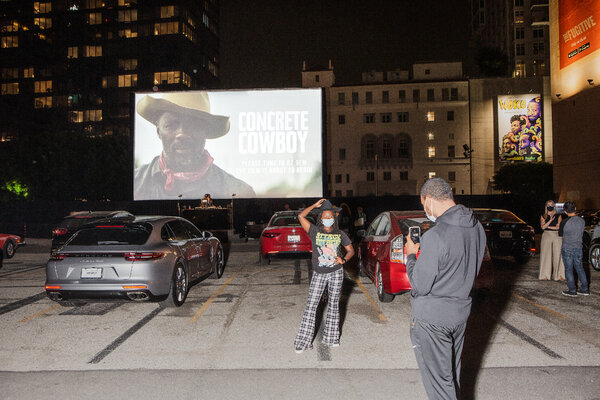 “It is a dream come true,” Ricky Staub, the 37-year-old white filmmaker making his directorial debut, said with a big grin while standing in front of a huge screen. “I don’t know when you dream of releasing your movie it’s at a drive-in. But I never dreamed that my first movie would be an all-black western set in Philly.”

Mr. Staub had ambitious plans when “Concrete Cowboy” landed coveted spots in the Telluride and Toronto film festivals. He envisioned his cast of real cowboys descending onto Telluride’s red carpet in Colorado on horseback this month before flying north to be regaled in Toronto’s 2,500-seat Roy Thomson Hall theater — a choice venue for garnering all-important buzz in front of a packed crowd of industry luminaries and eager moviegoers.

That all changed when Telluride was canceled because of the coronavirus pandemic and Toronto opted for a hybrid model that features in-person screenings for Canadian audiences and a virtual version for everyone else.

“Everyone told me the best part of finishing your movie was when you started going to the festivals,” Mr. Staub said in an interview. “I don’t get to experience that at all. I have huge amounts of gratitude, but I’m sad I don’t get to go. It’s all just different degrees of being bummed.” 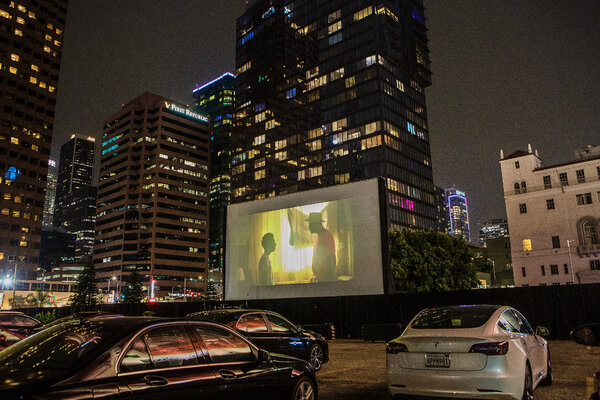 The loss of traditional film festivals means more than missing out on cocktail parties and the red carpet, however. For small indie films like “Concrete Cowboy,” which cost under $5 million to make and is still seeking a distributor, not having a chance to build word-of-mouth momentum at the festivals could be the difference between becoming an unlikely Oscar darling or another also-ran in the video-on-demand market. At the Venice Film Festival, held in person with certain safety restrictions and concluding this week, “One Night in Miami” — the directorial debut of the Oscar-winning actress Regina King — has already generated early awards chatter. Amazon recently bought it in a bidding war.

“The eventized nature of what festivals are and what they do, from building momentum around a film and often a filmmaker, make what we do possible,” said Tom Quinn, the chief executive of Neon, which distributed “Parasite.” That film first caught audiences’ attention at the Cannes Film Festival last year before making its unlikely march to the Oscar stage, where it was named best picture.

“We lose all of that,” Mr. Quinn added. “It’s not as quantifiable. It’s hard to believe it’s really there if you can’t see it.”

Toronto is trying to create that enthusiasm in the virtual world. Between a select number of online question-and-answer sessions with filmmakers, and both drive-in showings and 50-person theater screenings in Toronto, the event will showcase 50 films instead of the 333 it programmed in 2019. “Concrete Cowboy” will be shown at the festival Sunday — though the filmmakers won’t be there — and online on Monday.

Cameron Bailey, artistic director and co-head of the festival, admits that it’s “strange,” especially without the usual throngs crowding the streets during the 10-day international event. But he said the festival was still able to propel new filmmakers and films, even in a virtual world.

“A festival’s primary currency is intangible — it’s buzz,” Mr. Bailey said. “Buzz is not a physical thing. It doesn’t have to happen in a particular place, at a particular time. It can happen in all different ways, as we know from the internet on a daily basis."

Film festivals have long been incubators of talented filmmakers. Steven Soderbergh pioneered the modern indie film movement when his first feature, “Sex, Lies, and Videotape,” debuted in 1989 at what is now the Sundance Film Festival, and Barry Jenkins and “Moonlight” began their march to the Oscars in Telluride in 2016.

Lee Daniels, a producer of “Concrete Cowboy,” saw his own career take off after debuting the second feature he directed, “Precious,” at Sundance in 2009. That early screening helped propel his movie to two Academy Awards, including one for Geoffrey Fletcher, who became the first Black screenwriter to win an Oscar.

“These festivals give birth to young voices, and they celebrate them,” Mr. Daniels said. “They nurture you.”

Mr. Daniels came aboard “Concrete Cowboy” as a producer because he was attracted to the story, centered on a Black father and son, and believed that he had found a new talent in Mr. Staub. He’s pleased that both Telluride and Toronto agreed.

He said he was confident the film would find an audience even without the traditional festival mechanisms. “The work speaks for itself,” Mr. Daniels said. “It’s strong.”

“Concrete Cowboy” takes place among Black cowboys trying to preserve the last urban horse stable in an area that was once filled with them. It tells the story of Cole (Caleb McLaughlin from “Stranger Things”), a troubled 15-year old sent to live with his estranged father (Mr. Elba), a subdued horseman more comfortable with his animals than with other people.

The producers are hopeful that with so much production still paused and content companies, especially streamers, eager for more, the movie will find a buyer. (On Friday, Netflix bought Halle Berry’s directorial debut, “Bruised,” which is premiering in Toronto as a work in progress, for $19 million.) Also, the Oscars have been pushed back to April, meaning an award campaign could be started if the film receives positive critical response.

Even buyers like Neon, which prefers to have films play in theaters first, are planning on opening their wallets if they find a movie worth purchasing. “We are coming to Toronto to buy, definitely,” Mr. Quinn said. “Nothing has changed.”

In 2017, he bought “I, Tonya” after seeing it at Toronto. That film generated $54 million at the worldwide box office and earned Allison Janney an Oscar for best supporting actress.

Mr. Elba, who is also a producer of “Concrete Cowboy,” acknowledged that the conditions for the film weren’t ideal, but he still embraced the thought of being involved with the festival. “It’s a very special film during a very special time,” he said in a recorded video message that played ahead of the Los Angeles drive-in event, which was hosted by the film’s sales agent, Endeavor Content.

“It’s a shame we are not there, but sometimes you’ve just got to shape shift and move and that’s what we did,” Mr. Elba said in a phone interview from New Mexico, where he is about to resume shooting on a Netflix movie that was postponed this year when he was infected by the coronavirus. “We, as a group, are thankful we get the opportunity to put it out there even if it isn’t with the bells and whistles we would like.”