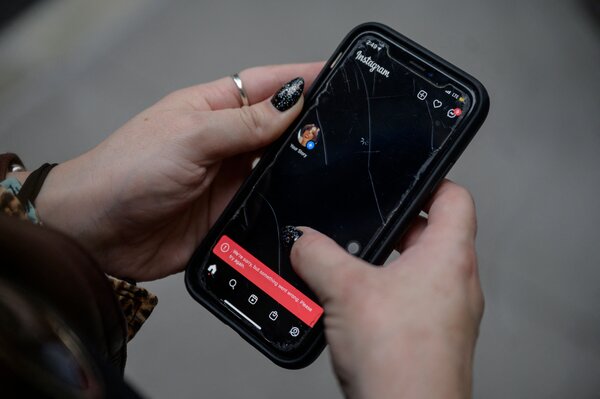 Many thought the big news for Facebook today would be the Senate testimony of a whistle-blower who has been the source of uncomfortable revelations about the company’s business practices.

But then, just before noon Eastern yesterday, the tech giant’s family of apps — Facebook, Instagram and WhatsApp — went down in a global outage that lasted more than five hours. It left more than 3.5 billion users locked out, lopped off 5 percent from Facebook’s stock (its worst daily decline this year) and cut $6 billion from the personal fortune of Mark Zuckerberg.

In the time it took to identify the issue — Facebook said the culprit was changes to underlying internet infrastructure — and reset servers at a data center in Santa Clara, Calif., the world was reminded just how far the social media giant has embedded itself into people’s lives. That puts the company’s current travails into perspective.

Speaking of which, Frances Haugen, a former Facebook product manager who leaked internal documents to The Wall Street Journal, will soon take the stand at a Senate hearing to argue for stricter regulation of the company. Proceedings are scheduled to start at 10 a.m. Eastern. Here’s what to expect, from The Times’s Cecilia Kang:

Haugen will focus on the company’s push to obtain younger users. Some of the research she leaked to The Journal showed that Instagram harmed teenagers by worsening self-esteem and stoking anxiety.

Lawmakers will embrace Haugen’s testimony. Republicans and Democrats are united in their anger at Facebook for failing to protect young users and for allowing misinformation to spread.

Senators will drill into what Facebook’s executives knew. They will probably ask if Zuckerberg and other leaders were aware of but ignored the research on Instagram’s effect on children and other issues like the spread of far-right and hate groups ahead of the Capitol riot.

They will probably ask how the company’s systems work to promote toxic content. They could also focus on how tools like beauty filters, comments and the “like” button can hook young users to Instagram.

Read more about Haugen’s testimony in The Times’s live briefing about the hearing.

In other Facebook news, the company filed a motion yesterday to dismiss an antitrust case brought by the F.T.C. The judge has until mid-November to respond.

Oil prices hit their highest levels since 2014. OPEC and its allies declined to significantly increase supplies, despite pressure from President Biden and other leaders to ramp up production to stem rapidly rising energy prices. Analysts expect tight supplies to continue to push up prices through the end of the year.

Another Chinese property developer misses a bond payment. With markets on edge about Evergrande, the smaller luxury apartment developer Fantasia missed a $206 million bond payment, catching some investors by surprise and raising concerns about the broader health of China’s heavily indebted property industry.

Scrutiny grows over Fed officials’ personal trading practices. Senator Elizabeth Warren, Democrat of Massachusetts, called for an insider trading investigation by the S.E.C., asking the agency to look into transactions by three Fed officials last year. Hours later, the Fed said that it had asked its Office of Inspector General to conduct an independent review.

A jury orders Tesla to pay $137 million to a former employee over racist treatment. Owen Diaz, a Black former worker for the carmaker, had accused Tesla of ignoring racial abuse he faced. Separately, the top auto-safety regulator in the U.S. declined to open an investigation into whether Tesla’s batteries were prone to catching on fire, after receiving reports of fires in China.

Is Ozy Media open or closed? The digital media company said on Friday that it would shut down after a series of reports about misleading practices. Yesterday, Ozy’s C.E.O., Carlos Watson, insisted in TV interviews that the outlet was “going to open for business.” Ron Conway, an early Ozy investor, told The Times that he was troubled to hear what Watson had to say, and that he had urged him to direct Ozy’s remaining funds to employees.

Last week, President Biden’s push to spend $3.5 trillion on social programs and climate measures stalled in Congress, facing united opposition by Republicans and disagreement among Democrats. Corporate America is also ramping up its lobby spending to fight parts of the bill, reports The Times’s Luke Broadwater.

More than 4,000 lobbyists are working on budget and spending issues, according to the nonprofit watchdog group OpenSecrets. Ten major industries have spent nearly $700 million on lobbying this year, with health care and finance leading the way.

The U.S. Chamber of Congress is trying to block the spending bill because of concerns that it would increase taxes. (It also withdrew its support for a $1 trillion bipartisan infrastructure bill, after it was linked to the $3.5 trillion social bill and amid a falling out with Republicans.)

The pharmaceutical industry is fighting a provision that would allow Medicare to negotiate drug prices.

The banking industry is trying to stop a proposal that would expand reporting requirements to the I.R.S., citing privacy fears.

The corporate lobbyists say they have the country’s interest in mind. Ken Frazier, the executive chairman of Merck, said allowing the government to force drug prices down would also result in less money available for R&D into new treatments for diseases.

But others see disruption. “We’re seeing an unprecedented level of lobbying by the powerful special interests that want to defeat us,” said Senator Bernie Sanders, independent of Vermont, who is one of the architects of the spending bill.

“It is increasingly clear that China’s plans do not include meaningful reforms to address the concerns that have been shared by the United States and many other countries.”

—Katherine Tai, the U.S. trade representative, in a speech in which she laid out some of the first details on the Biden administration’s approach to trade with China. The countries will begin talks soon, and Tai gave few specifics on the U.S.’s intentions, beyond enforcing the Phase 1 trade deal signed under President Donald Trump.

Qualcomm announced yesterday that it had acquired the automotive tech company Veoneer for $4.5 billion, breaking up a deal Veoneer had signed with the auto parts group Magna. The acquisition will bolster Qualcomm’s aspirations in autonomous driving, as well as advance the deal making aspirations of SSW Partners, a new investment firm founded by three influential Wall Streeters, which joined Qualcomm on the bid.

It is the first major deal for SSW Partners, which will take Veoneer’s traditional auto-parts business, while Qualcomm will retain Veoneer’s drive-tech division. The star trio behind SSW highlights the interconnectedness of Wall Street’s power circles:

Joshua Steiner, a former chief of staff at the Treasury Department, who founded Quadrangle Group with Steve Rattner, before later heading to Bloomberg.

Antonio Weiss, the former global head of investment banking at Lazard, who went on to work as counselor to Treasury Secretary Jack Lew during the Obama administration.

Eric Schwartz, who worked at Goldman Sachs on the management committee and as co-head of the partnership committee.

Gary Gensler, the S.E.C. chair, recently called people “one of the most critical assets of a company.” He is proposing new rules for reporting on human capital, which could include measures on turnover, training, diversity and more.

Public companies now have a lot of leeway on what to report about their workforces, and according to a new report by Just Capital, they aren’t saying much. That means that if the S.E.C. imposes rules, or investors push for more information, executives could have a lot of work ahead of them.

Just Capital combed through reports by the 100 largest employers to look for information about 28 key human capital measures. Among the findings: 20 percent disclosed their minimum wage, 15 percent reported their employee turnover and 13 percent published the minority share of new hires.

Is more disclosure needed? Just Capital is unequivocal: Without consistent reporting across companies, “investors can’t make well-informed decisions about where to direct their holdings, potential hires can’t factor a company’s treatment of workers into their employment choices and customers can’t shift their purchasing practices to support companies leading the way.”

Cryptocurrency supporters say that their innovations promote financial freedom and inclusion. But the process of creating, or “mining,” Bitcoin and other cryptocurrencies is very energy-intensive, drawing criticism.

What happens when crypto and environmental consciousness collide? Possibly good things, according to a new report from the Center for American Progress. Todd Phillips, director of financial regulatory and corporate governance at the center, said the S.E.C. could reduce the environmental impact of digital assets by characterizing more crypto tokens as securities. This would require more environmental disclosures from companies in the crypto industry and new rules that would limit issuers’ impact on the climate.

The crypto industry won’t like this: It argues that many cryptocurrencies should not be deemed securities. (An S.E.C. case against Ripple, creator of the token XRP, will influence this debate.) But however its assets are defined, the fast-growing, $2 trillion crypto industry is not going away, making its environmental footprint more urgent to address.

Let’s talk about it: Today, at 1 p.m. Eastern, join us for a “DealBook Dialogue” call about cryptocurrency and the environment. DealBook’s Andrew Ross Sorkin and Ephrat Livni will be joined by Alex de Vries, a data scientist who tracks crypto’s energy use; Paul Prager, the C.E.O. of the Bitcoin mining company TeraWulf; and Kathleen Breitman, whose company Tezos is making nonfungible tokens more energy-efficient. You can submit questions live or when you R.S.V.P. Register here.

GlobalFoundries, the Abu Dhabi-owned chip-maker, is planning to list on the Nasdaq as it expands its operations in the U.S. (CNBC)

Sky Mavis, the maker of a crypto-based game that uses nonfungible tokens, was valued near $3 billion in a funding round. (The Information)

Rent the Runway filed for an I.P.O., revealing mounting losses but improving subscriptions for its clothing lending service as the pandemic progressed. (CNBC)

Xi Jinping is remaking China’s business world in his own image. (NYT)

New Zealand has given up on its “Covid zero” strategy. (NYT)

Best of the rest

Forbes’s latest list of the richest Americans is out, with few surprises at the very top. (Forbes)

JPMorgan Chase will ban business travel and in-person meetings for employees who aren’t vaccinated against the coronavirus. (Bloomberg)

William Shatner will boldly go where few have gone before. (NYT)

We’d like your feedback! Please email thoughts and suggestions to [email protected]