Ms. Venkataraman, the editor of The Globe’s editorial page, asked Dr. Kendi, the author of a book called “How to Be an Antiracist,” why he decided to found the Center for Antiracist Research in a city known for the backlash to busing and “where sports fans boo athletes of color,” she recalled in an interview. They started talking about their shared obsession with a different Boston history, 19th century abolitionist newspapers. Then they wondered what it would mean to found, in 2021, a newspaper in the spirit of William Lloyd Garrison’s legendary The Liberator.

In particular, they wondered, what would it mean to bring to American racism the sense of urgency with which Garrison, in 1831, started the newspaper, abandoning a more gradualist approach to slavery. “On this subject, I do not wish to think, or speak, or write with moderation. No! no!” he famously began, saying that would be like telling “a man whose house is on fire, to give a moderate alarm.”

Now, with the backing of their institutions and a seven-figure budget, they plan later this year to start an online publication that blends reportage, opinion and academic research, some of which will appear in The Globe. They hope to revive the tradition of a generation of media that predates the formal division of news and opinion in 20th-century American journalism. And they want to channel the energy that has produced a year of newsroom conversations and arguments about racism.

“If you don’t have people agitating for urgent change, it becomes easy to just turn to other problems,” Ms. Venkataraman said in an interview. “And I think that’s sort of an inspiring framework for thinking about why you need a publication or platform like this now, because you need to keep it on people’s minds past the news cycle.”

This is not, of course, a simple project. The politics of the two venerable institutions means that the new publication will be hiring two editors in chief, one with a more academic bent and one more journalistic, amid a national scramble for editorial talent. The founders said they’d had preliminary conversations with CBS’s Wesley Lowery and Errin Haines of The 19th, a new nonprofit group focused on gender and politics that is serving as a model for The Emancipator. The project has backing from the university and the newspaper but also is seeking to raise money from foundations and individuals.

And then there’s the matter of the name. A Christian nonprofit organization best known for fighting against marriage equality, Liberty Counsel, has trademarked “The Liberator” for its newsletter. So Dr. Kendi and Ms. Venkataraman had to dig into somewhat more obscure corners of the past for an available historical publication: The Emancipator, which for a time during the 19th century was the newspaper of the American Anti-Slavery Society.

But perhaps the most interesting challenge will be defining what it means to start fresh after a year of internal debate in American newsrooms over, among other things, when to use the word “racism,” and what it even means. Should it be reserved for Nazis and Klansmen, and used with extreme caution because it carries such power? Or should it be applied, as a new generation of writers have argued, to daily features of American injustice? Dr. Kendi has played a central role in the debate with his 2019 book.

“If there was ever a body of people who should be arguing out the definition of a term, particularly a seemingly politically charged term like ‘racism,’ why would it not be journalists?” Dr. Kendi said in an interview on Thursday. “They should define the term based on evidence.”

Dr. Kendi’s book, a memoirish argument that Americans of all races must confront their roles in a racist system, has drawn attention, and controversy, for pulling the word “racist” away from its current usage as a hypercharged word reserved for the clearest cases. He thinks the word should be attached to actions, not people, and used to describe supporting policies — like standardized testing — that produce a racially unequal outcome. The focus on outcomes helped put Dr. Kendi at the center of the long-running argument about the roots of inequality. But when he published his book, he said, he was bracing for criticism from the left. It had become an axiom in some circles that Black Americans can’t be racist by definition. But the people committing racist acts in his book include President Barack Obama and Dr. Kendi himself.

And so Dr. Kendi’s work has influenced a growing newsroom debate over using the word descriptively, as an assertion about policy, rather than as a hazy, charged personal epithet. The 2019 book, and the intense focus on racism after the killing of George Floyd the next year, also transformed Dr. Kendi from a well-regarded but low-key academic networker into a mainstream, best-selling author whose book is sold at Logan Airport. He’s become what one of his friends called “Captain Black America” — a Black academic or journalist who becomes a lightning rod for the right and the object of white liberal adulation, as Ta-Nehisi Coates did after his 2014 Atlantic article making the case for reparations.

“If he didn’t exist, his critics would need to invent him, because he’s a person they can target,” said The New Yorker writer Jelani Cobb.

Self-promotion doesn’t come naturally to Dr. Kendi. But on his way home to put his daughter to bed Thursday, he gamely submitted to a short interview in the lobby of a Boston University building, double masked and wearing three layers of wool against the cold rain. While I waited, I read on Twitter about Alexi McCammond, a young Black woman forced to resign as the new editor of Teen Vogue after a controversy regarding racist tweets about Asians she sent as a teenager. I asked him about how his view that “racist” isn’t a permanent label for an individual squares with an unforgiving social media culture and a growing corporate culture that has translated his work into formalized training sessions — the subject of a recent critical opinion piece in The Globe.

Dr. Kendi said he would not “police” how people use his work. “People should be held accountable when they’re being racist, but I think people should be able to repair the damage,” he said. “I don’t view ‘racist’ as a fixed category.” He added that he did not believe that “if someone said something racist 20 years ago or even two days ago that right now, in this moment, they’re also racist.”

That’s not how most Americans, or most reporters, use the word. But it has a clarity and flexibility that make it valuable whether you buy into Dr. Kendi’s broader worldview, which includes sweeping criticism of American capitalism. And The Emancipator is interesting in part because it’s an opportunity to put his ideas into journalistic practice. 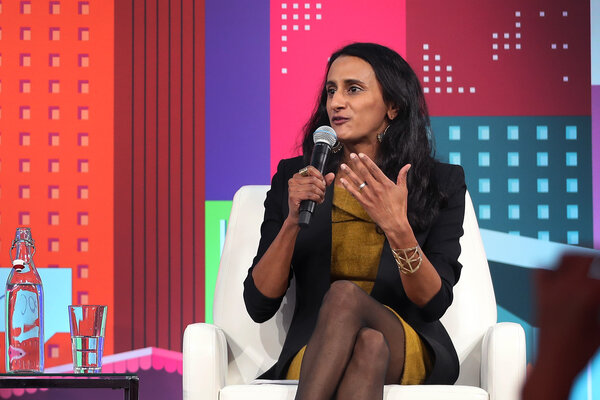 But The Emancipator’s biggest opportunity — and challenge — may simply be to find and grip an audience. That’s not easy: It’s noisy and competitive out there, and translating academic ideas for popular consumption can be harder than it sounds.

The Emancipator has one of the great advantages in American journalism, though: It’s starting from scratch. As mainstream newsrooms wring their hands over what it means to be neutral, The Emancipator can — in theory — offer the growing number of journalists who seem to be asking for it a chance to erase the 20th-century divide between news and opinion, and blend reportage, data and argument about how to change society now. As a model, Ms. Venkataraman cited a recent Washington Post project on rethinking public safety by going beyond police reform.

“For some of this stuff, trying something new is a more efficient way to address some of the frustrations people have,” said Ms. Haines, who said she’d be staying at the 19th. (Mr. Lowery declined to comment on an inquiry about the project.) “Turning the ship around at a legacy institution — that is hard.”

And Dr. Kendi and Ms. Venkataraman said they were not expecting to hew to a party line, or to take Dr. Kendi’s work as orthodoxy. I asked him, for instance, about criticism that his calling standardized tests racist could give easy cover to bad instruction for Black students.

One thing that won’t be debated, Ms. Venkataraman said, is “that racism exists and is in many ways ingrained in American society.” She compared it to coverage of global warming.

“When you stop debating whether climate change or systemic racism is real and whether it’s a problem, you can then debate the more salient question what to do about it,” she said. “To me that is reality-based journalism, not advocacy journalism.”