The school bus rolled through Beverly, a Boston suburb, early last month. The city’s fleet of buses and minivans makes similar trips every weekday, but here two things were different. First, the ride was eerily quiet because there was no noisy diesel under the hood, and second the socially distanced passengers were not students but local officials and reporters. Beverly was welcoming its first battery electric school bus.

The city wants to convert all 27 of its full-size school buses to electric. That would have been a financial stretch, since electric school buses can cost three times as much as a diesel version. What jump-started the project was a major, if not well known, part of Volkswagen’s diesel settlement.

In federal court settlements from 2016 and 2017, Volkswagen admitted that it had fouled the air by equipping about 590,000 diesel vehicles with “defeat devices” to cheat on federal emissions tests. In addition to compensating U.S. owners (more than $11 billion) and investing $2 billion in charging infrastructure for electric vehicles (a project named Electrify America), VW had to offer up $2.9 billion for a mitigation trust fund that would compensate states for excess nitrogen oxide pollution.

The settlement is proceeding, and will undoubtedly lead to cleaner skies. But much of that money is set to pay for new diesels — much cleaner than the vehicles they replace, but still diesels. Some of it is also now trickling out to projects like the Beverly bus.

“Yes, diesel engines are far cleaner than they used to be,” said Daniel Sperling, founding director of the Institute of Transportation Studies at the University of California, Davis. “The question is: How strongly should we support this interim solution to NOx reduction, as opposed to the more permanent solution of electrification?”

The VW scandal came to light in large part because of the efforts of a small American nonprofit, the International Council on Clean Transportation, and an engineer there, John German. Investigating the emissions of American-model diesel cars and trucks, the council and testing partners from West Virginia University found VWs that were as much as 35 times in excess of federal standards. The researchers thought they had made a mistake, but repeated testing produced the same results.

Mr. German sees some value in replacing older diesels with new ones. “Before 2010, diesel trucks and buses had no particulate filters, and particulates are by far the largest health hazard from vehicle emissions,” he said. Mr. German also said that “the charging infrastructure is one of the more neglected pieces in the transition to electric vehicles,” and that he was glad to see some of the funds going there.

The number of affected diesel Volkswagens in each state was the primary factor in deciding the funding allocations, ranging from $423 million for California to a little more than $8 million each for North Dakota and South Dakota. About $700 million had been awarded or made available nationwide through early September, according to statistics from Atlas Public Policy.

The Beverly bus is one of four such vehicles funded in Massachusetts. “Our goal is to transition to as clean and renewable a transportation fleet as is possible,” Mayor Michael P. Cahill said at the Oct. 8 ceremony, pointing out the gap in costs for electrics and diesels. He called this “the first step in a lot of steps.”

Funds from this trust can be used to replace diesel engines (2009 or older) with new ones, or electrics, for all manner of vehicles: a bus or heavy truck, a ferry or tugboat, or airport ground equipment, port forklifts or freight switchers. In the state plans, diesel-to-diesel replacements — which can stretch the money further — account for more than 70 percent of the available funding, said the Diesel Technology Forum, a trade group.

That trend distresses some clean-energy advocates, who argue that it’s time to retire diesel technology.

“We are obviously very disappointed that VW settlement money has been spent on nonelectric technology,” said Katherine Stainken, policy director at Plug In America. “These funds should be spent on technologies that emit zero tailpipe pollution. The future of transportation — in both the light- and heavy-duty sector — is electric all around.”

A new diesel truck could be on the road for 20 years or more. But the Diesel Technology Forum points to federal regulations that mandated much cleaner diesels, and a study claiming that nitrogen oxide emissions in new vehicles have been reduced 94 percent. According to the Environmental Protection Agency, “New heavy-duty trucks and buses are roughly 99 percent cleaner than 1970 models.”

“The largest source of NOx is from heavy-duty diesel trucks, construction equipment and marine engines,” said Allen Schaeffer, the diesel forum’s executive director. “It makes sense to go after the biggest sources.” Replacing the engine in an old diesel tugboat would be the equivalent of taking 74,000 cars off the road, he said. 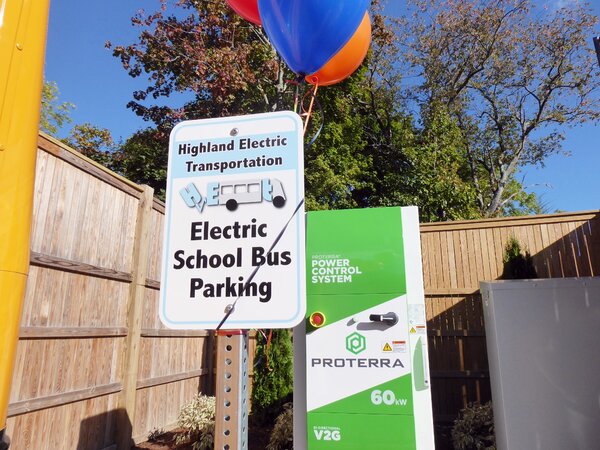 According to Ken Adler, senior contributing scientist at the Environmental Defense Fund, “It depends on what you think is the biggest problem.

“If you think it’s the existential threat posed by climate change, then you’d want to spend the settlement money on electric school buses,” Mr. Adler, a former E.P.A. official, continued. “But diesel engines can be very dirty, and replacing them with newer diesels is much cheaper.”

E.V. advocates concede that battery technology for heavy trucks is embryonic, but they say that’s why the VW settlement money is important: It can push early adoption.

“Battery electric and hydrogen technology have momentum in the marketplace,” said Cristiano Façanha, global director at CALSTART, which works to further zero-emission technology.

Tesla Motors has announced an electric semitrailer truck with 500-mile range, and orders are being taken, but the date for first deliveries has been pushed back to 2021. In September, General Motors announced a strategic partnership with Nikola, a maker of electric and zero-emission fuel-cell heavy trucks, but Nikola’s technology has since come under scrutiny.

The states are making sharply divergent decisions about where their settlement money is going, under guidelines that give them a fair amount of leeway. The U.S. Public Interest Research Group developed a scorecard for the state plans, based on its conviction that spending the money on diesel or other fossil-fuel technology would be a “wasted opportunity.”

Washington State and Hawaii received A-plus grades, and Rhode Island and Vermont were rated A. California, Massachusetts and New York got B’s, but many states fared poorly: 21 plus Washington, D.C., were rated D, and 14 plus Puerto Rico failed (meaning they did not put a priority on any electric projects).

“Our argument is that we have to think in the long term, and we can’t continue to double-down on the same technologies that got us into these problems in the first place,” said Matt Casale, director of environment campaigns at U.S. PIRG and a co-author of the study. He added that many states with low grades were replacing diesels that would have been retired anyway through the normal procurement process, so there was no net gain from the settlement funds.

Some states leaned heavily on electrification. New York’s Truck Voucher Incentive Program reimburses operators for as much as 95 percent of the incremental cost of a battery or fuel-cell truck over its diesel equivalent (compared with 90 percent subsidies for hybrid-electric, propane or compressed natural gas). Zero-emission transit buses get 100 percent coverage, and electric school buses 80 percent.

The New York State Department of Environmental Conservation has contracts for an estimated $90 million of the state’s $127.7 million from the trust fund, said Jared Snyder, the agency’s deputy commissioner for air resources, climate change and energy. And more than $16 million is pending to pay for charging equipment or vehicle delivery, and to scrap existing vehicles as required by the VW settlement.

“The good news is that the slow rollout will now include new technologies that were not available two years ago, when the program was established,” he said.

Obviously, companies with a stake in the E.V. world would like to see the process move more quickly.

“We’re excited to help the states meet their ambitious climate reduction goals by reducing emissions,” said Cathy Zoi, the chief executive of EVgo, a fast-charging company that is working with VW settlement projects in Virginia, Pennsylvania, North Carolina, Washington and Florida. “But if people are going to buy electric cars, they have to feel comfortable they can charge them. The peanut butter of E.V.s has to go with the jelly of charging infrastructure.”

The electric solution has the strong support of Brian Foulds, who was on board for that bus ride in Beverly. Mr. Foulds is an E.V. advocate and a resident of nearby Concord, which is also expecting an electric school bus through the VW settlement. Concord has had a battery bus since 2016, as well as a large 5.5-megawatt solar array installed in 2017 near the town school bus depot, and its own municipal utility.

“Getting off fossil fuels is where we need to be,” he said.