Howard J. Rubenstein, who softened life’s blows and polished the tarnished images of the rich, the famous and the flawed for more than 65 years in becoming New York’s pre-eminent public relations impresario, died on Tuesday at his home in Manhattan. He was 88.

A spokeswoman, Nancy Haberman, confirmed the death. No cause was given.

In a profession often regarded with skepticism, Mr. Rubenstein, the founding chairman and president of Rubenstein Associates, was sometimes called a spin doctor, a charlatan or worse. But with a little help from his friends in the news media, he publicized the triumphs of many achievers, and when crises struck celebrities, politicians, corporations or cultural institutions, he was a fixer of choice, called in at a moment’s notice to control the damage and restore reputations.

His hundreds of clients were among the best-known names in town: Donald J. Trump, Rupert Murdoch, the late Yankees owner George M. Steinbrenner 3rd, Columbia University, the Metropolitan Opera, the New York Philharmonic and constellations of entertainers, civic and religious leaders, and Wall Street tycoons, their signed pictures lining the walls of Rubenstein Associates in a midtown Manhattan skyscraper.

His business was lucrative. Corporate clients often paid retainers of $10,000 a month, while the largest paid $750,000 or more a year, according to senior associates of Mr. Rubenstein. He did not publicly discuss his company’s billing practices or revenues. Estimates ranged from $30 million to $75 million in revenues a year. In any case, they made Mr. Rubenstein wealthy. He was said to earn $4 million to $7 million a year. 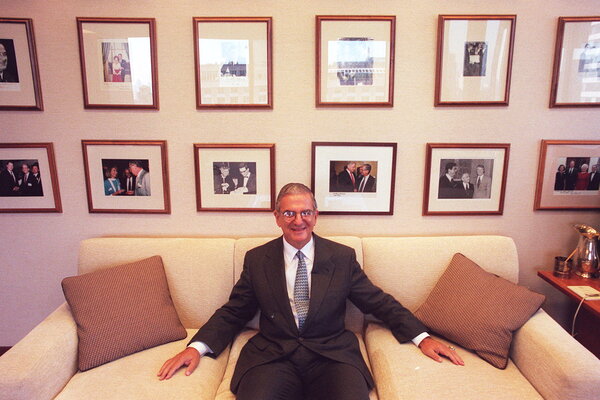 With mild manners and a soft voice, Mr. Rubenstein was the antithesis of the swaggering press agent caricatured in films like “The Sweet Smell of Success” and denigrated in newsrooms as a “flack” or “mouthpiece.” He did not inhabit nightclubs for gossip. He lived on Fifth Avenue overlooking Central Park, where even in his 60s and 70s he liked to jog daily. He dined often with corporate, cultural and political leaders.

He employed hundreds of people, preached ethics in speeches and articles on public relations, and impressed clients as diplomatic and trustworthy, although some rivals accused him of using underhanded tactics. He had been a friend of every New York mayor, governor and United States senator since the 1970s, and made seamless nonpartisan transitions between Democrats and Republicans.

“It doesn’t matter who it is,” former Mayor Edward I. Koch once explained. “It could be Caligula.”

Indeed, with his vast contacts in government, business, the news media and the arts, Mr. Rubenstein was often more power broker than public relations man, making connections among people and institutions for mutual benefit. He advised politicians, devised corporate strategies to shape public opinion, represented real estate interests and brought leaders of business, government and unions together to make deals.

His power lay hidden in countless favors, large and small. But his most visible stock in trade was trouble — a marital fight, a star blurting a racist remark, a drunken toot. His customized rehabilitation plans often involved simple public admissions or apologies, then silence to contain the imbroglio. The task, he said, was not keeping a lid on bad publicity. It was controlling its flow, tone and volume. He cautioned against lying, although his selective “truths” favored clients: People were never fired; they left to seek new opportunities.

“When you have a crisis, you first have to ask, what’s the right thing to do and say,” he told The New York Times in 1995. “Not what kind of spin can we put on, but what’s the right thing to do. You don’t let the facts dribble out. Sometimes you do it by holding a news conference. Other times you do it with a written statement, depending on how the client feels or the ability of the client to conduct himself or herself in a tough situation.”

For the sports broadcaster Marv Albert, a tough situation arose in 1997, when his dalliances with a cross-dresser and a prostitute-dominatrix were exposed by his guilty plea to a misdemeanor assault charge for biting a woman during a sexual encounter. After conferring with Mr. Rubenstein, he submitted to a news conference and a weeklong tour of the talk shows — Larry King, David Letterman, Katie Couric and Barbara Walters — elaborating his denials. Then he refused to talk about it anymore. Almost nothing new about the matter emerged, except a perception that Mr. Albert had forcefully defended himself, and after a period of withdrawal and rehabilitation, his career resumed virtually intact.

In 1996, the talk-show host Kathy Lee Gifford was caught in a scandal after a human rights organization reported that child sweatshop labor in Honduras was being exploited to manufacture a clothing line in her name. The Rubenstein prescription in her case was deflection and rehabilitation. Ms. Gifford went on national television to say she was not involved in factory management processes, then called for investigations and campaigned for new laws against sweatshop conditions. She even appeared at the White House with President Bill Clinton to support initiatives against child labor abuses.

Howard Joseph Rubenstein was born in Brooklyn on Feb. 3, 1932, to Samuel and Ada (Sall) Rubenstein. His father was a police reporter for the Standard News Association, which served New York City papers, and later for The New York Herald Tribune. Howard and his sister, June, grew up in the Bensonhurst section. He graduated from Midwood High School and in 1953 from the University of Pennsylvania, where he majored in economics.

At his mother’s urging, he applied to all the Ivy League law schools and was accepted at Harvard. But he dropped out after two months and went home, uncertain what to do. He declined his father’s idea of a copy boy’s job but was more receptive to another. Like some reporters then, his father did a little public relations work on the side, and he taught Howard how to write news releases and pitch story ideas to reporters. He also helped find his first client, the Menorah Home and Hospital for the Aged and Infirm.

Howard set up shop at the kitchen table in 1954. But after his mother refused to answer the home’s telephone with the greeting “Rubenstein Associates,” he rented an office. His next client was Vito Battista, an anti-tax Republican whose perennial quest for office eventually landed him a New York Assembly seat. Mr. Rubenstein rented a camel to plug Mr. Battista’s mayoral candidacy and draped it with a sign saying its back would be broken by another city tax.

Still drawn by the idea of being a lawyer, he took night classes at St. John’s University and earned a law degree in 1959. Through Representative Emanuel Celler, a Brooklyn Democrat who was chairman of the House Judiciary Committee, Mr. Rubenstein became the panel’s assistant counsel, but quit after six months to resume his public relations career.

In 1959, he married Amy Forman. She survives him, along with three children, Roni, Richard, and Steven Rubenstein, and seven grandchildren. David, another child, died in 1971 at the age of 9.

Mr. Rubenstein continued to be involved in his business in recent years, but his son Steven oversaw the day-to-day running of Rubenstein, as the company is now known, as its president. Richard Rubenstein founded his own agency, Rubenstein Public Relations, in 1987.

Mr. Rubenstein, nominally a Democrat, signed up a host of politicians as clients, many of them — like Abraham D. Beame, Hugh Carey and Stanley Steingut — starting careers that would lead to seats of power in City Hall, the Governor’s Mansion and the State Legislature. Through real estate contacts he recruited developers like Fred Trump (Donald’s father) and Lewis and Jack Rudin.

By the 1970s he was representing hundreds of the city’s most prominent people and organizations. He also served international celebrities, including Sarah Ferguson, the divorced Duchess of York. Occasionally he had to drop clients — notably four state agencies after Mr. Carey was elected governor in 1974, and the Brooklyn Museum of Art in 1999 after his friend Mayor Rudolph W. Giuliani condemned an exhibit there. In both cases he was caught in a conflict and deemed his friendship and loyalty to the officeholders to be the greater interest.

The 1990 breakup of Donald and Ivana Trump put a clash of public relations rivals on display, each with an eye on the bottom line. John Scanlon, known as an aggressive crisis manager, portrayed Mrs. Trump as an integral part of the Trump business empire. Mr. Trump, coached by Mr. Rubenstein, played down her responsibilities. So who won? Her settlement topped $20 million. But Mr. Trump’s net worth at the time was estimated at $1.7 billion to $4 billion.

Mr. Steinbrenner, whose harsh treatment of Yankee players and managers was a publicist’s nightmare, often left Mr. Rubenstein resorting to “no comment.” Starting a decade before Mr. Steinbrenner’s death in 2010, the publicist orchestrated a tactical retreat for “the Boss.” Reporters said he was shielding an aging man from public view, but Mr. Rubenstein offered a more benign interpretation, saying Mr. Steinbrenner’s lowered profile “just comes with maturity — he just doesn’t relish publicity the way he used to.”

Another difficult client was Leona Helmsley, the hotel and real estate magnate who was convicted of income tax evasion in 1989. She became a symbol of arrogance when a former maid quoted her in testimony as saying, “Only the little people pay taxes.” Mr. Rubenstein visited Mrs. Helmsley in prison, and after she died in 2007 and left $12 million to her dog, Trouble, a Maltese, prompting lawsuits and death threats against the pet, he became a spokesman for Trouble, too, as interest peaked in its life of luxury.

“The dog is being well cared for in an undisclosed location,” he said tactfully.

After Mr. Trump became president, Mr. Rubenstein distanced himself for him. “While I haven’t worked with him for more than 20 years,” he told PRWeek.com in 2017, “it was clear even back then that he was a highly astute communicator.”