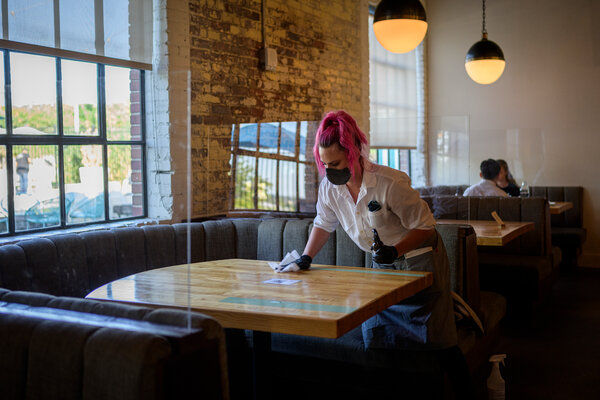 About 825,000 people filed for state unemployment benefits last week, the Labor Department said Thursday. That figure, which does not reflect seasonal adjustments, is far below the more than six million a week who were filing as layoffs peaked in the spring, but higher than in the worst weeks of many past recessions. Millions are relying on unemployment benefits to meet their basic expenses.

Worse, progress is slowing: Applications for state jobless benefits rose last week, and have been falling only slowly since midsummer.

“Compared to April, they’re trending down, but if you’re comparing to the pre-Covid era they are still so high,” said AnnElizabeth Konkel, an economist for the career site Indeed.

The recent loss of momentum is particularly worrisome, Ms. Konkel said, because restaurants and other businesses that had shifted operations outdoors are likely to begin laying off workers again as colder weather hits Northern states in the weeks ahead.

“We’re losing steam, which is definitely not good heading into the winter,” she said.

In addition to the filings for state jobless benefits, the Labor Department recorded 630,000 initial filings for Pandemic Unemployment Assistance, an emergency federal program that covers freelancers, self-employed workers and others left out of the regular unemployment system. That program has been plagued by fraud and double-counting, and many economists say the data is unreliable.

In recent weeks, California and Arizona in particular have reported a flood of fraudulent claims. On Saturday, California announced it would stop accepting applications for unemployment benefits for two weeks while it took steps to cut down on fraud and address other issues.