John Lewis and Waitrose have said they will stop putting plastic toys inside Christmas crackers.

The John Lewis Partnership, which operates both retailers, made the decision as part of plans to cut down on single-use plastic.

The usual Christmas cracker fillers such as yo-yos, rings and mini combs will be replaced by toys made from recyclable materials.

However, customers will not see the change until Christmas 2020.

The retailer is also banning the use of plastic glitter on the crackers and will instead use stencilling or embossing.

It has already cut glitter by two thirds on its own-brand advent calendars, wrapping paper and gift bags.

Dan Cooper, head Christmas buyer at John Lewis, said: “Reducing the amount of single use plastic in products and packaging is really important to us and our customers.”

He said the company is “always searching for new, more sustainable products which will make Christmas sparkle but won’t end up spoiling our environment” but that it may take time for them to appear in shops as they plan a year and a half in advance.

Earlier this month, the retailer revealed that consumers were “more mindful than ever” about the damaging effect of single-use plastic.

It said that sales of resuable stainless steel straws had increased by 1,573% over the last year following a crackdown on plastic straws. 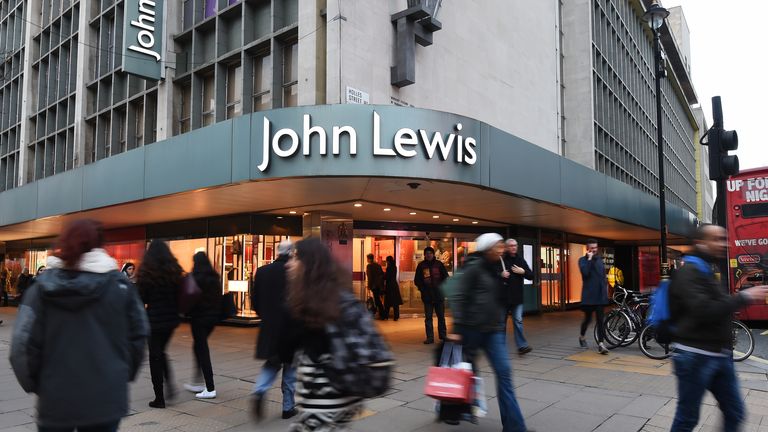 Sales of resuable water bottles were up 15% and portable cutlery 176%.

Other retailers have also made moves to be more environmentally-conscious.

Tesco is switching to degradable plastic-free glitter in its Christmas plant products and will be removing glitter from its own-brand wrapping paper, tags and single Christmas cards.

:: Sky News is broadcasting a Brexit-free channel, weekdays 5pm to 10pm on Sky 523