Galen Gilbert knows just what he will do with the check he gets from Washington as part of the pandemic relief package, whatever the amount: put it in the bank.

“I’ve got more clients than I can handle right now and I’ve made more money than I usually do,” said Mr. Gilbert, a 71-year-old lawyer who lives in a Boston suburb. “So I’m not really suffering financially.”

Cheryl K. Smith, an author and editor who lives in Low Pass, Ore., isn’t in a rush to spend the money, either. She plans to save a portion, too, while donating the rest to a local food bank. “I’m actually saving money right now,” Ms. Smith said.

President Trump’s demand to increase the already-approved $600 individual payment to $2,000, with backing from congressional Democrats, has dominated events in Washington this week and redefined the debate for more stimulus during the pandemic. Mitch McConnell, the Senate majority leader, said on Wednesday he would not allow a vote on a standalone bill increasing the checks to $2,000, dooming the effort, at least for now.

Whatever the amount, the reality is that most Americans right now are much more likely to save the money they receive.

Of course, the money will be a lifesaver for the roughly 20 million people collecting unemployment benefits and others who are working reduced hours or earning less than they used to. Yet, for the majority of the estimated 160 million individuals and families who will receive it, spending the money is expected not to be a high priority.

After an earlier round of $1,200 stimulus checks went out in the spring, the saving rate skyrocketed and remains at a nearly 40-year high. That largely reflects the lopsided nature of the pandemic recession that has put some Americans in dire straits while leaving many others untouched.

Economists on the right and left of the political spectrum said that when otherwise financially secure people receive an unexpected windfall, they almost invariably save it. The free-market economist Milton Friedman highlighted this phenomenon decades ago.

Many experts said a truly stimulative package would have earmarked the payments for those who need it most — the unemployed.

“We know where the pockets of need are,” said Greg Daco, chief economist at Oxford Economics. “Putting it there would be a much more efficient use of the stimulus.”

And because the money will immediately be put to work — the jobless don’t have the luxury of saving it — it would also have a much bigger impact on the overall economy, through what experts refer to as the multiplier effect. In essence, each dollar given to a person in need is likely to benefit the economy more because it would be used to pay for, say, groceries or rent.

“Providing $2,400 to a family of four in the same financial situation as they were at the end of 2019 doesn’t do much to boost the overall economy right now,” Mr. Daco said. “It’s not whether it’s a positive or not. It’s their potency that’s in question.”

Individuals with an adjusted gross income in 2019 of up to $75,000 will receive the $600 payment, and couples earning up to $150,000 a year will get twice that amount. There is also a $600 payment for each child in families that meet those income requirements. People making more than those limits will receive partial payments up to certain income thresholds.

A more effective approach, experts say, would have raised unemployment insurance benefits to the jobless by $600 a week, matching the supplement under the stimulus package Congress passed last spring, rather than the $300 weekly subsidy the new legislation provides. Democrats had pushed for larger payments to the jobless and included it in legislation that passed the House, which they control. But the measure met stiff resistance from Republicans, who control the Senate, and was not included in the final compromise bill.

The money could also have been used to extend two key unemployment programs for much longer than the 11 weeks provided for in the new bill. The current extension runs only until mid-March, well before mass vaccinations are expected later in the spring and summer and the economy begins to return to normal.

“The economy is going to remain limited by the pandemic for the next six to nine months,” said Carl Tannenbaum, chief economist at Northern Trust in Chicago.

Roughly 20 million Americans are collecting unemployment benefits and the jobless rate stands at 6.7 percent. One year ago, it was 3.5 percent, a half-century low.

And there are signs with the economy sputtering, more Americans are giving up — more than half a million people stopped looking for work and dropped out of the labor force just last month, meaning they are no longer counted among the unemployed. 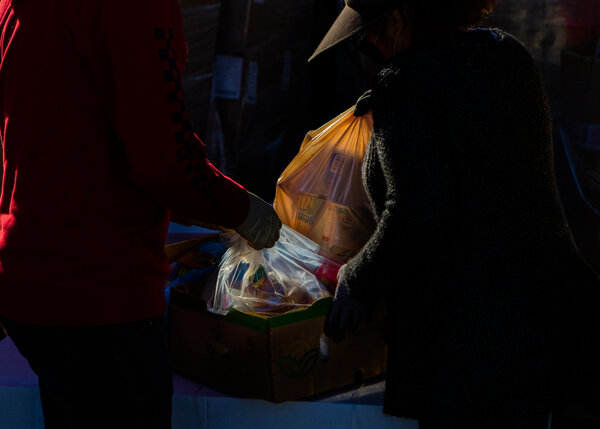 To be sure, the money from Washington will be welcomed by most Americans, even if they are financially secure. Besides saving it, others will use it to pay down debt, or invest it.

A study released in August by three economists, Olivier Coibion, Yuriy Gorodnichenko and Michael Weber, found that recipients of the $1,200 payments sent out under the CARES Act last spring largely held off on spending the money. Only 15 percent of people said they had spent it, or planned to spend it. Most said they would save the cash or use it to pay down debt.

Answers to Your Questions About the Stimulus Bill

The economic relief package will issue payments of $600 and distribute a federal unemployment benefit of $300 for at least 10 weeks. Find more about the measure and what’s in it for you. For details on how to get assistance, check out our Hub for Help.