Lucky for me, a slew of venture-backed companies want to help me with my lazy altruism. They envision a world where we sit down for dinner and brag that no animals were harmed in the production of this carbon-neutral porterhouse. They want to Impossible Burger our entire diet. They want me to shift from farm-to-table to lab-to-table.

It’s beginning to work. Consumer sales of the increasingly impressive simulacra of meat, eggs and dairy products grew 24 percent from 2015 to 2020, according to the market research company NPD Group — and 89 percent of those people are, like me, not vegetarians.

I wanted to see just how realistic the lab-to-table future could be, so I decided to throw a dinner party filled with bleeding edge products that don’t bleed. The carefully chosen guest list would consist of my lovely wife, Cassandra, and our 11-year-old son, Laszlo, mostly because of the pandemic, and partly because it was going to be hard to find friends eager to consume bacon made from fungi and ice cream spit out by yeast cells.

It took me two months to gather the items for my party. They had to be animal-free and environmentally friendly and made in a sci-fi-impressive manner. They’d include not just food, but all the wow factors like jewelry and beauty products that could make a dinner at home with the same three people for the 300th day in a row feel like a party.

When I began shopping for our event, I learned that there are a lot of complicated methods to make basic things. You can mix together a lot of plants to approximate a pre-existing product, which is what Beyond Meat does for burgers with pea protein, canola oil, coconut oil and 14 other ingredients.

You can find a breed of mycelium (the root system of fungi) that approximates a particular meat texture and call it something like “beef fauxginoff.” Or you can insert DNA into algae, bacteria or fungi so they spit out whatever protein you want.

You can also combine these methods, as Impossible Burger does, using soy, coconut oil and a tiny bit of heme — an iron-y, blood-like, soy protein spit out by DNA-manipulated yeast.

None of this information made it on my party invite.

My first challenge in getting all the products I wanted was that the U.S. government hasn’t approved the sale of cell-grown meat, so companies were too scared to sneak me any. I could fly to Singapore, which became the first country to approve cell-based foods in December, and try chicken nuggets from a company called Eat Just. Or to Tel Aviv, where, despite the fact that the Israeli government hasn’t approved sales of cell-based animal products, SuperMeat opened a restaurant in November where it exchanges chicken sandwiches for feedback. (A lot of it has focused on whether the chicken can be considered kosher.)

I settled for the other production methods. And because I was nervous about preparing unfamiliar foods, I enlisted the help of Sascha Weiss, the former personal chef for George Lucas and current research chef at Perfect Day Foods, a start-up that has raised about $400 million to make dairy protein from DNA-altered fungi. Mr. Weiss’s approach to veganism spoke to me: less reduce, reuse, recycle and more reconceive, redesign, rebuild.

He got so excited about planning our meal that he sent me all the ingredients I’d need in separate containers, including one marked “toothpicks” (which, to my disappointment, were made from real wood).

Face cream from spiders and whiskey without grains

Before the night began, I spread moisturizer from Eighteen-B on my face. It is made from fermented spider silk proteins, making me feel foolish for years of ducking spider webs. I also dabbed on AHC Ageless Eye Cream for Face. It includes human collagen that’s been fermented from microflora — the idea being that replacing our collagen with an exact replica will work better.

The company that makes the eye cream, Geltor, also sells gelatin to food companies. They once made mastodon gelatin for a gummy elephant, like a “Flintstones” episode come to life.

To start our evening, I made Cassandra a whiskey sour. I served it on a coaster made of soft fake leather produced from mycelium, which was grown on a bed of sawdust and mixed with corn stalks. Handbags and other fashion items made of this “unleather” — called Mylo, from the same company behind the spider cream — will come out this year from Stella McCartney, Lululemon, Kering and Adidas.

Instead of using egg whites for the foam on top of the drink, I used beta-lactoglobulin, the main protein found in whey from cow’s milk. Perfect Day sells it to producers of salad dressings, cake mixes and ice creams. The whiskey was from Endless West, a company in San Francisco producing spirits without grains or barrels. Making whiskey doesn’t kill animals, but it is water- and land-intensive. So the founders of Endless West make theirs from compounds that try to mimic a bourbon that has rested in American oak. 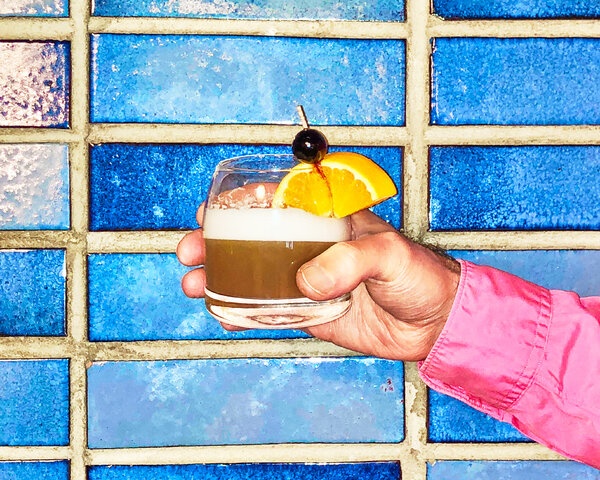 Cassandra said her drink was perfect. In fact, the foam from the beta-lactoglobulin lasted longer than shaken egg whites would. Plus, I pointed out to Cassandra that our bourbon produced fewer carbon emissions. She did not find this interesting.

I needed her to like her drink, so she could have another. Cassandra, a former vegetarian, was not looking forward to our evening. “Fake meat has a lot of crap it in it. I’m not keen on highly processed foods,” she said. “I know a lot of unhealthy vegetarians.”

To change her mood, I presented her with a bunch of jewelry with lab-made diamonds. Diamond mining is a brutal industry, according to everything I ever learned from watching one Leonardo DiCaprio movie. Mr. DiCaprio is, in fact, an investor in Diamond Foundry, a Silicon Valley company that slowly grows diamonds in a reactor that heats plasma to 10,000 degrees, the heat of the outer layers of the sun.

Its diamonds sell for just a little less than mined ones. This meant that I had to gently tell Cassandra that the $6,400 tennis bracelet, $3,300 drop earrings, $5,400 ring and $4,500 bar necklace looked great on her, but had to be returned the next day as red carpet celebrities do. Her mood wasn’t fixed.

She did, however, say — completely unprompted — that my skin was glowing. I had no idea if that was because of the spider webs, human collagen, two cocktails or my worry about returning the diamonds.

My son, Laszlo, was a harder guest to wrangle. “I was going to heat up some chicken nuggets,” he said. But once he saw the food, and considered the effort of microwaving nuggets, he decided to give it a try. “It doesn’t look disgusting.”

For our first course, I presented a salad of gem lettuce, roasted carrots and watermelon radishes served over a smear of fake labneh. I kept tasting the labneh directly from the container, confused at how beta-lactoglobulin and coconut oil could be this convincing. I surrounded the salad with bits of Prime Roots’ fake bacon, which is made from a mycelium called kogi that was impressively smokey and textured, although not all that meaty.

I topped it with potato-and-dill “egg bites.” They’re coming to supermarkets in March from Just Egg — the same company selling cell-based chicken in Singapore — made out of mung bean protein and canola oil. It was almost as tasty as the company’s liquid “egg,” which I had already come to use as a scrambled egg replacement.

For our main course, Mr. Weiss prepared ravioli stuffed with mushrooms and cream cheese from beta-lactoglobulin and coconut oil, and again, it was utterly convincing. I paired this with a glass of sake that Perfect Day also makes without any rice.

I felt vaguely superior, as if we were leaving the Animal Age. I know it isn’t all that hard to be vegan where I live in Southern California. (I know this especially because I am constantly told so by Moby, the musician and activist who has “vegan for life” tattooed on his neck and lives down the street from me.) But it seemed more possible when I replaced meat with this fun futuristic world than a simple gatherer past.

For dessert, I brought out a freezer full of ice cream made from Perfect Day’s protein. Instead of making their own products, the company’s strategy is to get existing brands to put out vegan versions — and hopefully proclaim that they use a real milk protein, without getting into the DNA-tweaked fungi detail.

Late last year, Graeter’s, the 150-year-old Cincinnati ice cream institution, introduced six flavors for its Perfect Indulgence vegan line. Laszlo ate a bowl of its Cookies & Cream happily. “I like it,” he said, and then added, “It tastes like slightly worse ice cream than normal.”

Someone recently sent me a gift of traditional Graeter’s ice cream so I was able to compare both versions of Oregon Strawberry. The Perfect Day version was the best vegan ice cream I’ve ever had. But what Laszlo might have been noticing was that it was denser and lacked creaminess, perhaps because of all the oils replacing milk fats.

A future where natural and man-made are indistinguishable is still a bit away. Still, we all liked the dinner. And as with the pandemic, it seemed possible that the scientists were going to save us from ourselves. It helped that, despite not containing grapes, rice or rye, our drinks had the same amount of alcohol.

The next morning, slightly hung over, I ran into Moby, as one does when the only thing one can do is walk around the block. He told me he was a producer on “Meat The Future,” a documentary that follows the start-up Memphis Meats on its journey to bring cell-based meats to market.

I told him I couldn’t wait to try cell-based meat. He told me that he’d never eat the stuff.

“It makes me think of a Rube Goldberg device,” he said. “Black beans and brown rice is a nutritionally perfect food and it basically costs nothing. The response that people have is to reinvent what is already there and is perfect.”

So, why, I asked, did he make a movie to publicize their work?

That made sense, especially later that night when I was knuckle-deep in a pint of plant-based Hazelnut Chocolate Chunk ice cream. I realized where those institutions were. They were in my head.

Photographs were produced remotely via videoconferencing. Amy Lombard was assisted by Laszlo Stein.