LONDON — The British department store Debenhams can trace its history back 242 years to a shop on Wigmore Street in central London. On Tuesday, it finally succumbed to the pressures of 21st-century e-commerce. After more than a year of restructuring and several months of trying to find a buyer, the company said it would begin shutting down.

Debenhams is the second big retailer to topple in two days, after Arcadia Group, which owns brands including Topshop and Miss Selfridge, filed for bankruptcy protection on Monday. The two are also linked because Arcadia’s brands have a big footprint in Debenhams, with sections set aside for their clothes.

And so, as Christmas lights flicker above the sidewalks in Britain’s downtowns and as the busiest shopping period of the year begins after a monthlong lockdown in England, the nation is watching two of its largest retailers fall. They have about 25,000 employees between them.

More bankruptcies are expected, as the lockdowns have relentlessly exposed the retailers that have failed to pick up on customers’ willingness to shop online.

“The retail house of cards on the high street is in danger of collapse,” said Susannah Streeter, an analyst at Hargreaves Lansdown.

Britain’s fashion retailers enjoyed a golden period and were seen for a time as a source of national pride. The Debenhams evening wear department was a middle-class destination for all of life’s major celebrations. Marks & Spencer, which announced plans during the summer to lay off nearly 8,000 workers, was a byword for quality for decades, with its cotton underwear and cashmere knits a staple of British households. 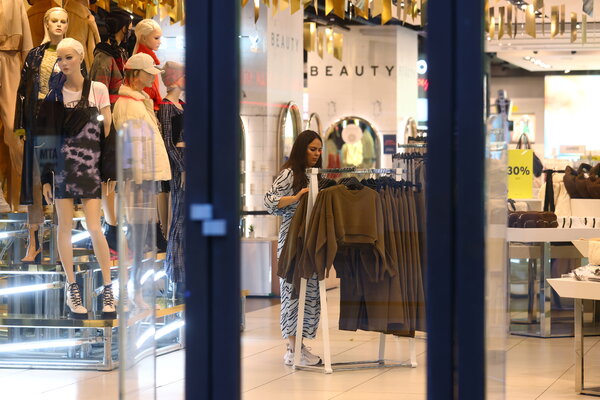 In the 2000s, Topshop — once considered the jewel in the crown of Philip Green’s Arcadia Group — was a genuine style authority thanks to sellout collaborations with the model Kate Moss and a vast Oxford Street emporium laden with catwalk-inspired knockoffs.

But these brands have suffered for years. Fast-fashion giants from overseas, like Zara from Spain and H&M from Sweden, started selling cheaper, trendier clothes. They were followed by online-only upstarts such as Boohoo and Pretty Little Thing (similar to the American brand Fashion Nova). Geared toward young women and powered by social commerce, they offer low-priced fashion products designed to be browsed, bought and worn on social media.

The pandemic has hastened the demise of brands found in Britain’s high street shopping districts. For about a third of the year, clothing stores and other nonessential retailers have been shuttered to comply with lockdowns, accelerating the move to e-commerce. Since February, online clothing sales have grown 17 percent in Britain, while in-store sales have slumped 22 percent.

The old guard retailers and department stores that were too slow to invest in their online operations have found themselves grappling with the costs of real estate empires visited by fewer and fewer people. Even accounting for scores of closures in recent years, Debenhams has 124 department stores, while Arcadia has 444 stores for its brands in Britain.

“Like Arcadia Group, Debenhams might have stood a better chance had its footprint of retail stores been smaller, but they were stuck with too many shops, on long leases they could not wriggle out of,” Ms. Streeter said.

Many fast-fashion retailers continue to thrive throughout the pandemic because they have few or no brick-and-mortar stores. Boohoo and Pretty Little Thing generally source from U.K.-based manufacturers in cities like Leicester, England. Clothes can be produced quickly and distributed faster within the country.

“If you are a high street shop, you have to sell a considerable amount in order to just break even,” because of high business property taxes and rents, said Stewart Perry, a partner in the insolvency and restructuring practice at Fieldfisher LLP, a European law firm. “They are competing with a warehouse in the back-end of nowhere.”

This summer, Boohoo came under intense public scrutiny after reports that its suppliers in Leicester were paying workers as little as 3.50 pounds, or $4.40, an hour. (The national living wage in Britain for ages 25 and above is £8.72, or $10.93.) But investors had already placed their bets on Boohoo. Its share price is up 7 percent this year, while the benchmark stock index in Britain has dropped 15 percent. In the past five years, Boohoo’s share price has risen more than 800 percent.

In a sign of its growing influence, Boohoo bought the rights to onetime British fashion retailing stalwarts Karen Millen, Coast, Oasis and Warehouse after they collapsed. By this same method, parts of Debenhams and Arcadia could still be rescued. There is speculation that Boohoo might bid for some of Arcadia’s brand portfolio, particularly Topshop. In January, the consultancy Brand Finance estimated the value of Arcadia’s brands to be £800 million, the bulk of which was attributed to Topshop.

This week’s announcements are the latest in a slow-moving decline for both companies. Last year, Arcadia entered into a so-called company voluntary agreement in Britain, where it closed stores and renegotiated debt terms, and filed for bankruptcy in the United States. In April 2019, Debenhams went into administration, wiping out some shareholders, and did it again this April.

The fact that neither company has been able to survive any longer even as the government is pouring tens of billions of pounds into shoring up businesses suggests that this trend for many retail stores is irreversible. Britain’s Treasury has ushered in a series of programs, breaks in the payment of business taxes, deferrals on sales taxes, protections from evictions, wage subsidies and grants.

By one gauge, the measures have worked: Company insolvencies were 42 percent lower in October than they were a year earlier.

By another, they have failed: Britain’s economy is expected to decline more than 11 percent this year, worse than almost every other advanced economy, while it has spent more than most others on its fiscal response.

There are likely to be more casualties before Britain climbs out of the economic hole. “Corporate insolvencies have nearly halved at a time when obviously the economy is tanking,” Mr. Perry said. “There are an awful lot of insolvencies being stored up.”